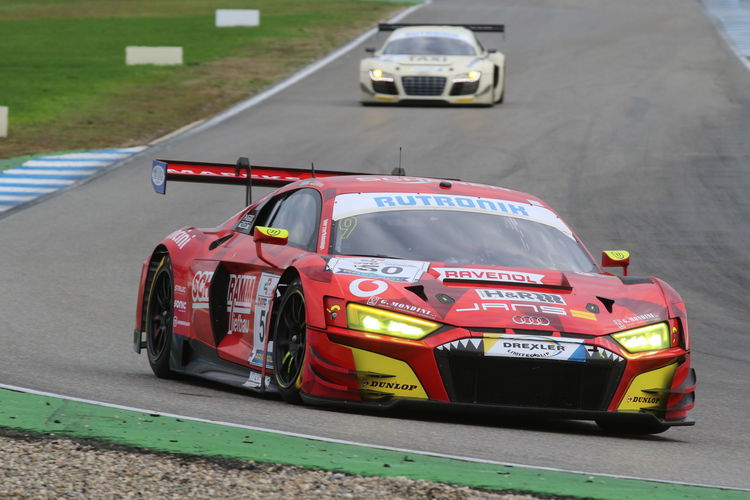 Victorious finale of the season at Hockenheim: In round eight of the DMV GTC at Hockenheim, Audi Sport’s customer teams shone with several top performances. In the Dunlop 60 race, Audi scored a one-two-three result. From the seventh spot on the grid, up-and-coming American driver Alec Udell from Phoenix Racing improved to third position before the pit stop. After the driver change, running on slicks on a drying track, his teammate, Kim Luis Schramm, overtook two other rivals and went on to win the one-hour race with a 19.6-second advantage. Yaco Racing managed a fightback as well. From eighth on the grid, Simon Reicher overtook five rivals as early as on lap one and in the end took the runner-up’s spot. Third position went to Isaac Tutumlu Lopez from Car Collection. All of them were on the grid in an Audi R8 LMS. The subsequent first sprint race was won by Udell in front of Tutumlu Lopez and Reicher. In the second sprint, Schramm in second and Reicher in third position finished on the podium again. With his strong performances, Simon Reicher won Class 1 in the final DMV GTC classification of the year. Tommy Tulpe in another Audi R8 LMS finished the Pro-Am classification and the Gentleman Cup runner-up.

One-two-three result in New Zealand: The Audi R8 LMS remains unbeaten in the South Island Endurance Series in New Zealand this season. Following their victory in the opening event, Neil Foster and Jonny Reid with Team IMS now celebrated their second success this season on the third race weekend at Timaru, having won the three-hour race after just one pit stop with a one-lap advantage. The runner-up’s spot went to Dale Chapman/Marc Doran/Andrew Waite in another Audi R8 LMS. The trio from Team Track Tec Racing had previously decided the second race of the series on the first weekend in October in its favor. Ben Byers/Christina Orr-West in an Audi R8 LMS ultra saw the checkered flag in third position.

Two victories in Australian club racing: Garry Higgon and Daniel Gaunt shared an Audi R8 LMS of the KFC team in round three of the CUE Enduro Super Series in Australia, scoring a lights-to-flag victory in both of the two one-hour races on the circuit at Winton.

Speedy visit to two locations: The winners from Audi Sport thrilled workers at two Audi locations in recent days. In addition to DTM Champion René Rast, Pierre Kaffer and Kelvin van der Linde drove their race cars around the plant premises in Neckarsulm, and Frank Stippler and Dries Vanthoor in Ingolstadt, sharing with the employees the sound and fascination exuded by two Audi R8 LMS: the original winning cars of this year’s 24-hour race at the Nürburgring and the 10 Hours of Suzuka. At Ingolstadt, race cars were driven through AUDI AG’s production halls for the first time ever.

Class title in finale: At Las Vegas, Vesko Kozarov/Jeff Burton celebrated a class title win in the GT4 America series following a successful race. In an Audi R8 LMS GT4, the two drivers from Team Rearden Racing finished the first race in the Pirelli GT4 America West runners-up as the best amateur team. As a result, the two Americans won the amateur classification of the Pirelli GT4 America West with a seven-point advantage, while Rearden Racing achieved the runner-up’s spot in the teams’ classification.

Three trophies at Hockenheim: Team Hella Pagid Racing One achieved three second places in the finale of the DMV GTC. Loris Prattes in an Audi R8 LMS GT4 finished the Dunlop 60 race plus the two sprint races runner-up in Class 5.

Runner-up finish in New Zealand: Spouses Dennis and Debbie Chapman celebrated a podium finish in their class on the third race weekend of the South Island Endurance Series. The Audi RS 3 LMS from Team Track Tec Racing took the runner-up’s spot in Class B in the one-hour race at Timaru.

From the last grid position to a podium finish: In the finale of the Supercar Challenge at Assen, Bas Koeten Racing in an Audi RS 3 LMS pulled off a sensational comeback in race one. Oscar Gräper/Bas Schouten had entered the race from 22nd, the last spot on the grid, and within just four laps fought back to fourth. By the time the checkered flag fell in the one-hour race, the Dutch driver pairing had improved to third position.

Two trophies in finale: Michael McCann finished the TC America at Las Vegas Motor Speedway with two podium positions. The American from the McCann Racing team drove his Audi RS 3 LMS in both 40-minute races at Las Vegas to third position. As a result, Team McCann Racing finished the final classification of the racing series runner-up in a field of twelve teams. The TCR Cup Drivers class for contenders in race cars with double-clutch transmissions was won by Bryan Putt in an Audi RS 3 LMS in front of his fellow Audi drivers Christian Cole and Stephen Vadja.

Six Audi cars in Japan: In round eight of the WTCR – FIA World Touring Car Cup at Suzuka, six Audi RS 3 LMS will be on the grid for the first time this season. Comtoyou Team Audi Sport is deploying Belgian driver Frédéric Vervisch, who in ninth position is currently the best Audi Sport driver in the standings and has previously scored one race win this year. His Dutch teammate Niels Langeveld is breaking new ground at Suzuka. Leopard Racing Team Audi Sport is preparing one Audi RS 3 LMS each for Frenchman Jean-Karl Vernay, who is ranked in tenth place of the standings, and his Scottish teammate Gordon Shedden. Team Hitotsuyama is looking forward to its home round. The long-standing Audi Sport customer team regularly contests the Super GT racing series with the Audi R8 LMS and the TCR Japan with the Audi RS 3 LMS. Now the squad has received two wild card entries, adding local drivers Ryuichiro Tomita and Ritomo Miyata to the FIA WTCR. This year, the FIA WTCR is using the East Course for the first time, a track configuration with a length of just 2.243 kilometers.