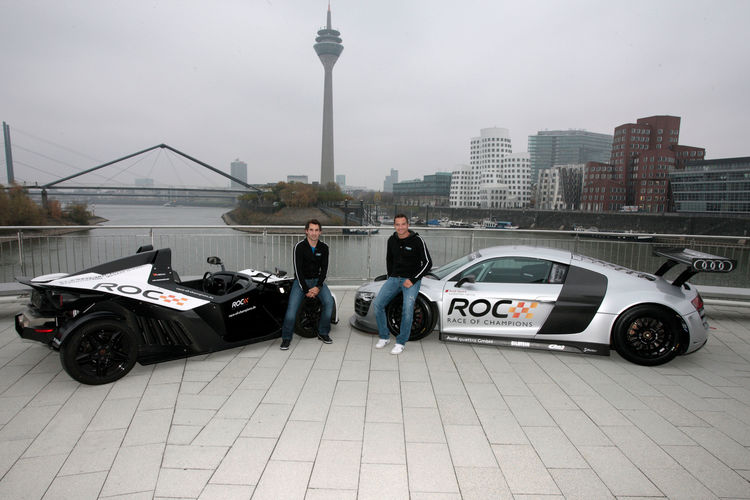 Audi will be represented at the 2011 Race of Champions at the ESPRIT arena in Düsseldorf on December 3 and 4, 2011 with its strongest line-up ever. As many as four Audi “factory” drivers will compete with Michael Schumacher, Sebastian Vettel & company. In addition, the brand with the four rings is deploying the 525-HP Audi R8 LMS to the meeting of the world’s best race and rally drivers as the most powerful competition vehicle in the field.

Filipe Albuquerque (Portugal), Mattias Ekström (Sweden), Tom Kristensen (Denmark) and Timo Scheider (Germany) were invited to participate in the eagerly awaited meeting that attracted more than 64,000 spectators last year. Consequently Audi has good chances of providing the best of the best at the Race of Champions yet again.

Three times the two-time DTM Champion Mattias Ekström has previously won the title at the Race of Champions. In 2006, at the finale in Paris, the Audi factory driver sensationally defeated local hero Sébastien Loeb, who has meanwhile become the eight-time World Rally Champion. Both in 2007 in London and in 2009 in Beijing, the Swede prevailed against Michael Schumacher. In 2010, Ekström was unable to run due to a conflicting commitment in the DTM finale at Shanghai (China). Yet last year it was again an Audi racer – at that time still employed by Audi Sport Italia –, the Portuguese Filipe Albuquerque, who prevailed against the world’s elite.

“The successes of our drivers at the Race of Champions show the high level of driving skills that exist at Audi,” says Head of Audi Motorsport Dr. Wolfgang Ullrich. “I think this was made obvious by our triumphs in the DTM and at the Le Mans 24 Hours as well.”

At the Race of Champions a select group of the world’s best race and rally drivers traditionally competes against each other in identical vehicles. The most powerful competition vehicle in 2011 is the Audi R8 LMS that already impressed the participants at last year’s event in Düsseldorf. With a track record of more than 110 victories in just three years, the mid-engine sports car from quattro GmbH has meanwhile become one of the world’s most successful GT3 vehicles. This year, among other events, the Audi R8 LMS won the 12-hour race at Bathurst (Australia) and the 24-hour race at Spa-Francorchamps (Belgium) in which over 60 GT3 sports cars competed.

In Düsseldorf, the Audi R8 LMS will run on an about one-kilometer parallel track that is being specifically set up for the Race of Champions at the ESPRIT arena. Featuring a width of 7.5 meters, the circuit is the widest one in the history of the event that dates back all the way to 1988.

Tom Kristensen, who with eight victories under his belt is the most successful Le Mans racer of all time, has been competing at the Race of Champions since 2001, and thus longer than any other entrant. “The Race of Champions is a fantastic event, that’s why I always enjoy returning to this race,” says the Audi factory driver. “The audience is enthusiastic and I look forward to competing again with Mattias (Ekström) in the ROC Nations Cup.”

In 2005, Ekström and Kristensen as “Team Scandinavia” won the Nations Cup on the eve of the single event. Most recently, Michael Schumacher and Sebastian Vettel prevailed four consecutive times. Aiming to break the winning streak of “Team Germany” are not just Ekström and Kristensen but also the two-time DTM Champion Timo Scheider who together with Formula One racer Timo Glock is forming the “SAT.1 Team Germany 2.” “Obviously, Team Germany with two Formula One World Champions has the favorite’s role,” says the Audi factory driver. “But I’m sure that Timo (Glock) and I will not just have a lot of fun in Düsseldorf but will be competitive too.”

This also applies to title defender Filipe Albuquerque. The second-best newcomer of the 2011 DTM season, who achieved his first DTM podium at Valencia at the start of October, was the sensational winner of last year’s ROC in Düsseldorf. “I’m really looking forward to compete again in the Race of Champions and to defend my title,” explains the Portugese.

The comeback of Mattias Ekström, who will contest the Race of Champions again after a one-year break, is being awaited with particularly eager anticipation. “In 2010, it was pretty painful having to watch the action from a distance,” says the Swede who won three DTM races and the Spa 24 Hours this year – the latter at the wheel of an Audi R8 LMS by the way. “I’m very much looking forward to being part of it again this year.”
Download PDF (97.5 KB)
Facebook
Twitter
LinkedIn
WhatsApp
Back to top