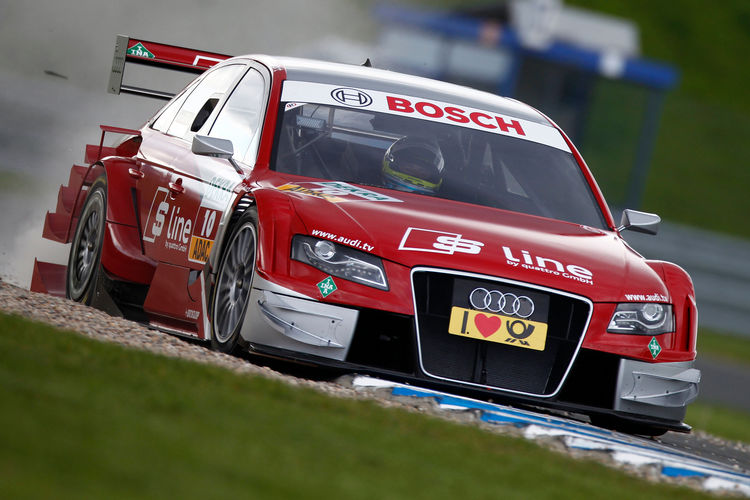 Audi showed a solid team performance in qualifying for the DTM race at Oschersleben (Sunday starting at 1:45 p.m. – local time – on “Das Erste”): no less than six Audi A4 DTM cars will be on the top eight grid positions.

“It’s not easy to make it into Q4 in the DTM with an old car, so I’m pleased with the result,” said Rockenfeller. ”Oschersleben has always been a good track for Audi and for me as well. I immediately clinched a podium here in my second DTM race. My lap in Q4 wasn’t perfect, but third place was the maximum for me today especially since we were still struggling a bit in free practice. We analyzed the data and worked hard. That paid off. I want to thank my team!”

Alongside Mike Rockenfeller title defender Timo Scheider (Audi Sport Team Abt Sportsline) will start into the race from the second row. The 2008 and 2009 Oschersleben winner was the front runner in the two free practice sessions. “In qualifying the car’s balance compared with this morning wasn’t one hundred percent,” said Scheider, who in Q4 drove over the kerbs too hard in the fast chicane and lost three and a half tenths of a second in the process. “I was a little over-ambitious there,” commented the Audi racer. “But even from the second row there’s quite a bit you can do.”

With Martin Tomczyk, Mattias Ekström, Oliver Jarvis and Miguel Molina on positions five to eight all five drivers from Audi Sport Team Abt Sportsline managed the leap into the top eight. “That’s not such an easy feat,” praised Head of Audi Motorsport Dr. Wolfgang Ullrich. “We’ve improved in terms of team performance. But our goal continues to be that of finally winning a race again. If we manage a good start tomorrow, anything’s possible.”

Alexandre Prémat (grid position twelve) and Markus Winkelhock (grid position 13) were eliminated in Q2. Katherine Legge will go into the race from position 18 since Audi Sport Team Rosberg had to change the gearbox, clutch and prop shaft on her Audi A4 DTM shortly before the qualifying.