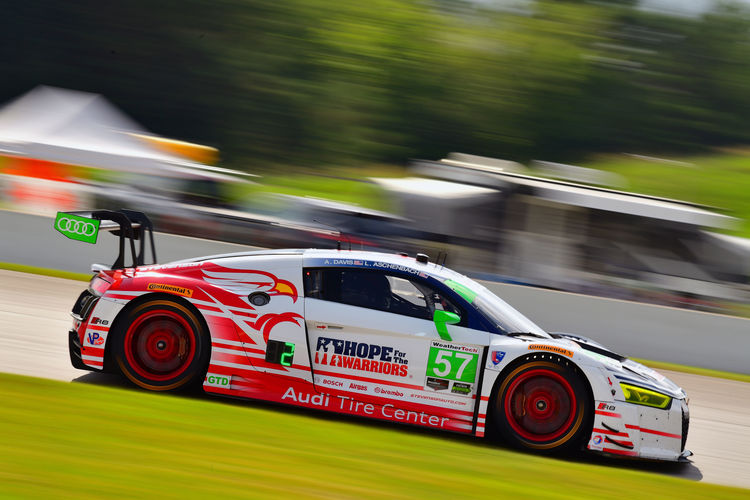 While the Stevenson Motorsports team won in Mosport with an Audi R8 LMS, the Racing One team with Niels Langeveld took the first victory for an Audi customer team in the ADAC TCR Germany.

First victory of the season for Stevenson Motorsports: Audi customer team Stevenson Motorsports took its first victory of the season in the seventh race of the IMSA WeatherTech SportsCar Championship. On the Mosport circuit in Canada, the two Americans Lawson Aschenbach/Andrew Davis prevailed after 2h 43m of driving time with a three-second advantage in an Audi R8 LMS in the GTD class. In the first seven places of the fiercely-contested endurance race, seven different brands crossed the finish line within only twelve seconds.

Complete success in the south of China: Audi customer teams in China celebrated two victories in two races of the Chinese GT Championship at Zhuhai. In the third race, Wang Liang/Martin Rump from the Kings Linky team were victorious in front of Marchy Lee/Alex Au from Audi Hong Kong. In the fourth race, Melvin Moh/Eric Loh won for Audi Hong Kong in front of their teammates Marchy Lee/Alex Au as well as Wang Liang/Martin Rump. All driver duos relied on the Audi R8 LMS.

Victory in Hockenheim: The HCB-Rutronik Racing team celebrated several successes with the Audi R8 LMS at the fifth race weekend of the DMV GTC. In the first sprint race in Hockenheim, Tommy Tulpe occupied second place in front of teammate Fabian Plentz. In the second sprint, Tulpe drove to third place. In the subsequent one-hour Dunlop 60 race, Tulpe and Plentz shared a cockpit in the Audi R8 LMS and celebrated victory with a 12.6-second advantage.

Success in Sweden: Jan Brunstedt celebrated two podium results during the second race weekend of the Swedish GT Championship at Falkenberg. The former champion won the first race with an advantage of 0.349 seconds in his Audi R8 LMS ultra, and then finished runner-up in the second heat.

Two trophies in Australia: Two customer teams of Audi lifted trophies on the fourth race weekend of the Australian GT Championship. On the Townsville street circuit on the country’s east coast, Kelvin van der Linde/Geoff Emery drove to second place in the second race with an Audi R8 LMS from the Valvoline team. In the third race, Duvashen Padayachee/Ash Walsh achieved another second place in the Audi R8 LMS with the Supabarn Supermarkets team. After four of five events, Geoff Emery is the best-placed Audi driver on the table. He is 28 points off the leader in second.

Two podiums in Spa: Team WRT clinched two trophies in a guest appearance in the British GT Championship. The French-British driver duo of Alain Ferté/Stuart Leonard took two second places in an Audi R8 LMS on the Circuit de Spa-Francorchamps. In the second race, the pair missed out on victory by just 0.294 seconds after an hour of racing.

First Audi victory in the ADAC TCR Germany: Niels Langeveld achieved the first victory for an Audi customer in the ADAC TCR Germany. The 29-year-old Dutchman from the Racing One team came out on top in Oschersleben, having fought his way to the front from ninth on the grid under the difficult conditions of a drying track. After 18 laps he had a 4.4-second winning margin.

Success for Kevin Arnold in the DMV GTC: Junior driver Kevin Arnold from Aichelau celebrated class successes in the DMV GTC at his home event in Hockenheim. The rookie from the Audi Sport TT Cup won both races in the Class 4 for the HCB-Rutronik Racing team in an Audi RS 3 LMS. In the Dunlop 60 race at the same event, he shared a cockpit with Audi Sport driver Rahel Frey and won the class 4 once more.

Two podiums in Portugal: Audi customer team S.C. Braga lifted two trophies at the third round of the TCR Portugal on the Vila Real circuit. In the first race, Patrick Cunha/Rafael Lobato were only beaten by 0.238 seconds in second place. In the second race, they achieved third place with the Audi RS 3 LMS.

Podium at the Nürburgring: The LMS Engineering team celebrated a podium success in the Eifel at the fourth race weekend of the VLN Endurance Championship. Matthias Wasel/Marcus Löhnert/Christian Schmitz crossed the finish line in third in the TCR class in an Audi RS 3 LMS after four race hours.

Podium in Sweden: An Audi driver achieved a podium at the sixth round of the TCR Scandinavia in Falkenberg. Reuben Kressner drove to third place in the third race. The conclusion on the 1.843-kilometer circuit was a true photo-finish: The Swede was 38 hundredths of a second behind the second placed Robert Dahlgren, who himself was just 48 hundredths of a second behind winner Johan Kristoffersson.