Starting signal for Audi and EKS in World RX

{{ activeItem() }}
Twitter
07/11/20
SOUND ON: The Audi RS 5 DTM testing at @circuitspa. Have a great weekend! &gt;&gt; https://t.co/RoNVUt6n8i… https://t.co/VO6wvZw7yY
07/10/20
“All my life, I’ve dreamed about sitting in such a race car one day.” Mike Rockenfeller looking back on the 2012 Au… https://t.co/Hk47Riv1XG
07/10/20
Destination ADAC @gtmasters 2020. Our customers also joined us for testing at the @Lausitzring_de this week:… https://t.co/IdkSZCHzwf
07/10/20
More testing at the @Lausitzring_de: Audi Sport customer racing on track with the Audi R8 LMS this week, getting re… https://t.co/pNfnnWiFmF
Audi Sport on Twitter
{{ activeItem() }}
Facebook
06/30/20
10 races with thrills, spills, banter and more: Looking back on the first season of the RCCO #RaceHome charity racing series with our DTM factory drivers competing for a good cause. #RaceHome #AudiTogether #etron #StayHome #PerformanceIsAnAttitude #RaceAtHome
06/29/20
From the virtual RCCO #RaceHome season finale, to picking up his new ride and racing at the Green Hell – a fun week for Nico Mueller in his latest #DriversDiary. >> audi.com/DTM >> audi.com/GT3 #RaceHome #AudiTogether #etron #StayHome #PerformanceIsAnAttitude #RaceAtHome -------------------- Audi RS 6 Avant: Combined fuel consumption in l/100 km: 11,7 (20.1) – 11,5 (20.5); combined CO2 emissions in g/km: 268 (431.3) – 263 (423.3); Information on fuel consumption and CO2 emissions as well as efficiency classes in ranges depending on the tires and alloy wheel rims used. // www.audi.com/dat
06/25/20
“That was the car I really loved to drive. I felt really confident in the new A4.” Together with Mattias Ekström, we’re looking back on the era of the Audi A4 DTM – the car that scored 5 DTM drivers’ titles for us. >> audi.com/DTM #PerformanceIsAnAttitude #AudiTogether
06/24/20
The first season of the RCCO #RaceHome charity racing series is in the books. Check out our race highlights and broadcast from WeatherTech Raceway Laguna Seca: >> bit.ly/2Vb03ww #RaceHome #AudiTogether #etron #StayHome #PerformanceIsAnAttitude #RaceAtHome
Audi Sport on Facebook 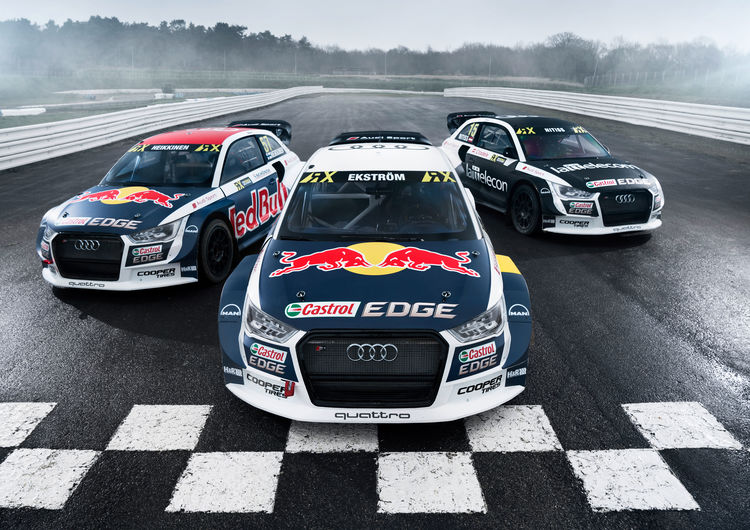 The fourth season of the FIA World Rallycross Championship is coming up. Twelve events on three continents are on the calendar this year, kicked off by the round at Barcelona on April 1 and 2, which marks a premiere in several respects. It will be the first race in which EKS receives factory support from Audi. The reigning world champion will be fielding three Audi S1 EKS RX quattro cars for the first time. Plus, Barcelona will be the venue of the season opener for the first time.

Mattias Ekström is looking forward to the race at the Circuit de Barcelona-Catalunya with confidence. “Last week, we did another three-day test in France and are entering the season superbly prepared,” says the Swede, who is both a driver and the team boss at EKS. “I’m very happy with the development work that was done in winter and our aim for this season is clear: we’d like to win the drivers’ and teams’ titles in the FIA World Rallycross Championship again this year.”

The rallycross track at the Circuit de Barcelona-Catalunya is located in the stadium section of the circuit and includes two super-fast corners included in Formula 1 races as well – albeit in the opposite direction. It is one of the few tracks with very fast initial corners on tarmac, plus many flat-out sections. “Thinking about last year puts a grin on my face,” says Ekström. At Barcelona, the Swede celebrated his fourth victory of the season in 2016 and laid the foundation for his subsequent world championship win. The basis for the success has been the 560 hp Audi S1 EKS RX quattro, which was technically modified once again for this season.

The FIA World Rallycross Championship will be broadcast live in 180 countries. Each Sunday of the total of twelve events the channels are going to air a two-hour show with interviews, background reports and the highlights of all four qualifying sessions, plus live footage of the semi-finals and final. Coverage of the season opener at Barcelona will start on Sunday, April 2, at 14:00 CEST. A list of all TV channels is available at www.fiaworldrallycross.com/tv_listings. In selected markets a live stream of World RX will be available online at www.fiaworldrallycross.com/live.