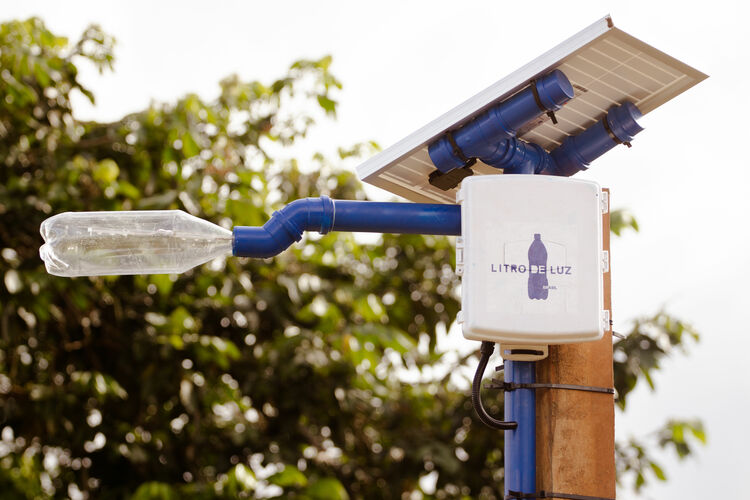 The Audi Environmental Foundation and Audi do Brasil are jointly supporting the NGO Litro de Luz Brasil, which is supplying solar lighting to three villages in the Amazon region without a reliable connection to the power grid. The primary objective is to enhance education and safety in the villages. The initiative is equipping common areas in the settlements with lamp posts powered by solar panels to make pathways safer at night. In addition, it is providing families with solar-powered hand lamps that can be used both at home and outside the home. They are designed to improve access to education, for example, by enabling villagers to read or complete schoolwork. More than 100 Brazilian families will benefit from the project. Delivery and installation are scheduled for the second quarter of 2022.

In order to involve the local population in the project and educate them about it, Litro de Luz Brasil is planning visits to the villages. The NGO will also install the equipment together with the locals. The charitable organization will also conduct a survey at the end of the project in order to evaluate its impact. Furthermore, Litro de Luz Brasil will handle the future maintenance of the lights and organize collection of the used lithium batteries. In addition, the NGO intends to train ambassadors who will represent the organization in the region.

The Audi Environmental Foundation was established in 2009 with the aim of promoting innovative projects and technologies designed to protect the environment. “Electricity is absolutely essential to everyday life but is still not readily available in many regions of the world. Access to a reliable power supply is often hard to come by, particularly for remote villages,” said Rüdiger Recknagel, director of the Audi Environmental Foundation. “Electricity is necessary, however, for people to have access to society and education – after all, it’s hard to read without light. With this in mind, the Audi Environmental Foundation is joining forces with Audi do Brasil to support the Litro de Luz Brasil initiative. In this way, we’re not only strengthening our relationship with our Brazilian colleagues, but also bringing light to places where it is sorely needed.”

“This project connects several elements of Audi’s DNA at once: innovation, technology, electrification, and, above all, the desire to help people live better lives. We keep talking about the future, but we can’t forget that there are millions of people around the world whose basic needs are not being met. Solar lighting is not only carbon neutral, but will also improve social conditions as well as health and safety in these villages,” said Antonio Calcagnotto, responsible for external affairs and sustainability at Audi do Brasil.

Litro de Luz Brasil is active in all five regions of the country, bringing solar lighting to communities that have so far not been able to access the power grid. The initiative supplies lamp posts, hand lamps, and other solar solutions made from simple materials such as PET bottles and PVC pipes, complemented by solar panels, rechargeable batteries, and LED lamps.

The organization began its work in Brazil in 2014 and has already directly helped more than 23,000 people thanks to the support of around 200 volunteers. It always works with the local population in the country’s neediest communities to develop its solutions and train people to use them. The initiative is active in urban centers as well as in rural regions, traditional villages on riverbanks, and indigenous settlements.

“This collaboration between Litro de Luz and Audi is an ideal way to help us achieve our dream of bringing light to the Amazon regions, where most Brazilians live without access to electricity,” said Laís Higashi, founder of Litro de Luz Brasil. “We strive to work with partners like Audi who have a sincere desire to help improve the lives of those most in need.” The partnership between the 29-year-old and Audi began in 2021, when Higashi was selected to receive a scholarship from the Audi Environmental Foundation for the One Young World Summit.

Inspired by a Brazilian’s invention

Litro de Luz Brasil is one of more than 15 chapters of the worldwide “Liter of Light” movement that originated in the Philippines in 2011 – inspired by a 2001 invention by Brazilian mechanic Alfredo Moser. His “Moser lamp” consists of a PET bottle that is fitted into a hole in a roof. The bottle is filled with water and bleach and delivers about as much light as a 60-watt light bulb.