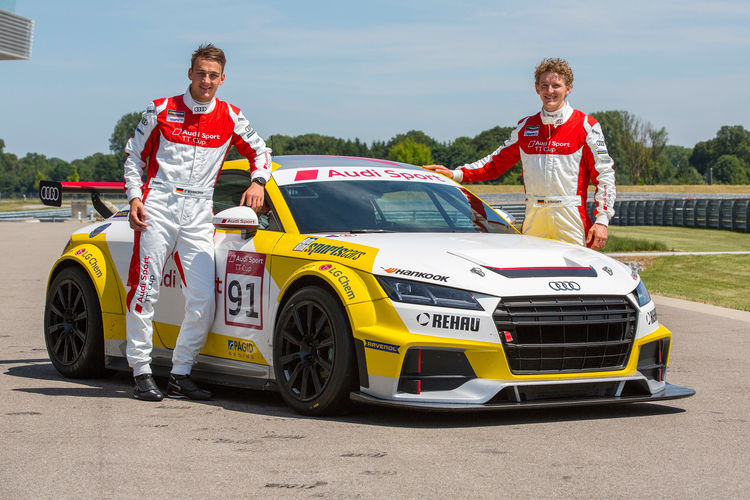 From ski slope to asphalt: Linus Straßer and Daniel Bohnacker are the two celebrity guests in the Audi Sport TT Cup at the Norisring from June 30 to July 2. The 24-year-old Linus Straßer was the German giant slalom champion, and has taken part in the World Championship and the World Cup, clinching a World Cup victory in the parallel slalom at Stockholm last January. The 27-year-old Daniel Bohnacker took a Ski Cross World Cup victory in Alpe d’Huez, has taken part in the Olympics and was a German champion. The races on Saturday, 1 July, 14:50 to 15:20, and on Sunday, July 2, 12:10 to 12:40, can be seen live on SPORT1 and at www.audi.com/ttcup.

Two second places in Monza: On the third weekend of the Italian GT Championship, Audi Sport Italia achieved its best result of the season so far. In Monza, Benoît Tréluyer/Vittorio Ghirelli finished second in both races in an Audi R8 LMS, and Tréluyer drove the fastest lap on both occasions as well. In the first race, an unscheduled tire change for Ghirelli cost about ten seconds, and the pair missed out on victory by only 3.3 seconds at the finish. In the second race the team was given a 3.4-second penalty for a driver change that was too fast, and were defeated in the end by 0.272 seconds. In the category for older racings cars, Davide Di Benedetto/Michele Merendino secured two class wins in the proven Audi R8 LMS ultra.

Three victories in Australia: On the Winton race track in Australia, Matt Stoupas won all three races of the Victorian State Circuit Racing Championships in an Audi R8 LMS ultra on the third event weekend.

Three trophies in Most: At the fourth round of the FIA CEZ on the Most circuit in the Czech Republic, Richard Chlad Jr. won the second race for the K&K Racing Team. In the first race, Petr Kačirek took second place. In the endurance race, Marcel Kusín and Filip Salaquarda finished second, also in an Audi R8 LMS ultra from K&K Racing Team.

Podium in Monza: On the third race weekend of TCR Italy, an Audi driver took a podium. Plamen Kralev achieved second place at Monza with an Audi RS 3 LMS from Kraf Racing.