Links
{{ activeItem() }}
Twitter
07/11/20
SOUND ON: The Audi RS 5 DTM testing at @circuitspa. Have a great weekend! &gt;&gt; https://t.co/RoNVUt6n8i… https://t.co/VO6wvZw7yY
07/10/20
“All my life, I’ve dreamed about sitting in such a race car one day.” Mike Rockenfeller looking back on the 2012 Au… https://t.co/Hk47Riv1XG
07/10/20
Destination ADAC @gtmasters 2020. Our customers also joined us for testing at the @Lausitzring_de this week:… https://t.co/IdkSZCHzwf
07/10/20
More testing at the @Lausitzring_de: Audi Sport customer racing on track with the Audi R8 LMS this week, getting re… https://t.co/pNfnnWiFmF
Audi Sport on Twitter
{{ activeItem() }}
Facebook
06/30/20
10 races with thrills, spills, banter and more: Looking back on the first season of the RCCO #RaceHome charity racing series with our DTM factory drivers competing for a good cause. #RaceHome #AudiTogether #etron #StayHome #PerformanceIsAnAttitude #RaceAtHome
06/29/20
From the virtual RCCO #RaceHome season finale, to picking up his new ride and racing at the Green Hell – a fun week for Nico Mueller in his latest #DriversDiary. >> audi.com/DTM >> audi.com/GT3 #RaceHome #AudiTogether #etron #StayHome #PerformanceIsAnAttitude #RaceAtHome -------------------- Audi RS 6 Avant: Combined fuel consumption in l/100 km: 11,7 (20.1) – 11,5 (20.5); combined CO2 emissions in g/km: 268 (431.3) – 263 (423.3); Information on fuel consumption and CO2 emissions as well as efficiency classes in ranges depending on the tires and alloy wheel rims used. // www.audi.com/dat
06/25/20
“That was the car I really loved to drive. I felt really confident in the new A4.” Together with Mattias Ekström, we’re looking back on the era of the Audi A4 DTM – the car that scored 5 DTM drivers’ titles for us. >> audi.com/DTM #PerformanceIsAnAttitude #AudiTogether
06/24/20
The first season of the RCCO #RaceHome charity racing series is in the books. Check out our race highlights and broadcast from WeatherTech Raceway Laguna Seca: >> bit.ly/2Vb03ww #RaceHome #AudiTogether #etron #StayHome #PerformanceIsAnAttitude #RaceAtHome
Audi Sport on Facebook 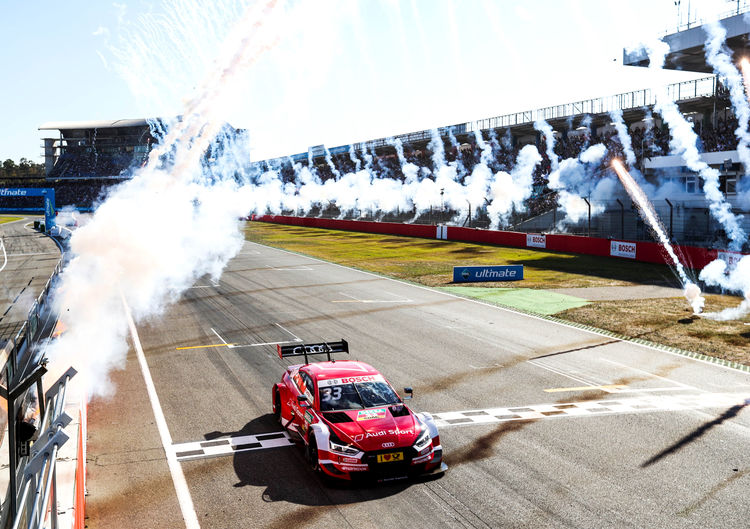 Six victories in a row! Audi driver René Rast won the season’s last race at the Hockenheimring as well, so topping his own record from the previous day. On Sunday, behind Mercedes-Benz driver Gary Paffett, the 31-year-old German from Audi Sport Team Rosberg secured the runner-up’s spot in the championship. The DTM’s new record man in the end was only lacking four points to successfully defend the title.

“What an incredible year, what a comeback!” Rast said after the finale in which he still bumped Mercedes-Benz driver Paul Di Resta from second place in the overall classification. “I’m very proud of Audi Sport, Team Rosberg and of myself, too. We had a tough start to the season, but never gave up, kept improving the car and also made progress in terms of strategy. All of the Audi drivers worked together fantastically as a team. Only by doing so, was it possible to keep the title dream open up until the end. Ultimately, it wasn’t quite enough. That’s a little bit of a shame, but Gary (Paffett) and Mercedes-Benz deserved to win. They were strong throughout the whole year.”

Following Audi’s altogether difficult start to the season, Rast, after nine races and a deficit of 104 points, was ranked in a distant 15th position in the standings. However, the Audi driver managed to make up 100 points and won seven races. His triumph in the finale was particularly dominant: Rast took the lead with a perfect start from the front row, achieved a clear advantage and subsequently controlled the pace up until the finish.

Nico Müller and Robin Frijns from Audi Sport Team Abt Sportsline made for maximum suspense in the final stage of the race: Both pitted late and on fresh tires made up position by position. “If the race had been one or two laps longer, we might have still managed to overtake Gary (Paffett) and could have made René (Rast) champion after all,” said Müller who crossed the finish line 1.7 seconds behind Paffett. “Even so, all of us can be proud of what we’ve still achieved. The final weekend with this fantastic crowd was simply mega. That clearly speaks for our sport, the championship and the DTM – I’m already looking forward to the future.”

Even before the race started, Audi made for a goose bumps moment in the full house of the Hockenheim Motodrom: An emotional film bidding farewell to Mercedes-Benz from the DTM, that can be watched on Audi Sport’s new YouTube channel, spontaneously triggered standing ovations in the grandstands. In the finale, all six Audi RS 5 DTM cars ran with the inscription “SEE YOU!” emblazoned on the rear wings, in which the “O” was represented by a star. In addition, the brand honored the joint time in the DTM with a large banner at the Audi Race Lounge.

“It was a fantastic way to close the season for the DTM, as well as for Audi Sport with two tremendous races in front of a great crowd,” said Head of Audi Motorsport Dieter Gass. “I’m very proud of what we achieved this weekend. At the beginning of the season, we were out in the middle of nowhere and now we finished the season with six victories in succession by René (Rast). And there are no regrets: We gave our all and won both races. Following the difficult start to the season, the rest was no longer in our hands. My thanks go to the entire Audi Sport squad, our teams, drivers and partners. Congratulations, obviously, to Gary (Paffett) and Mercedes-Benz as well. It’s a shame that they won’t be defending the title anymore next year. But I’m convinced that we’ll continue to see great racing in the DTM.”

Audi Sport is already intensively working for the new DTM season that will open on May 4/5, 2019. The new two-liter four-cylinder turbo engine is already running in a test car of the Audi RS 5 DTM.