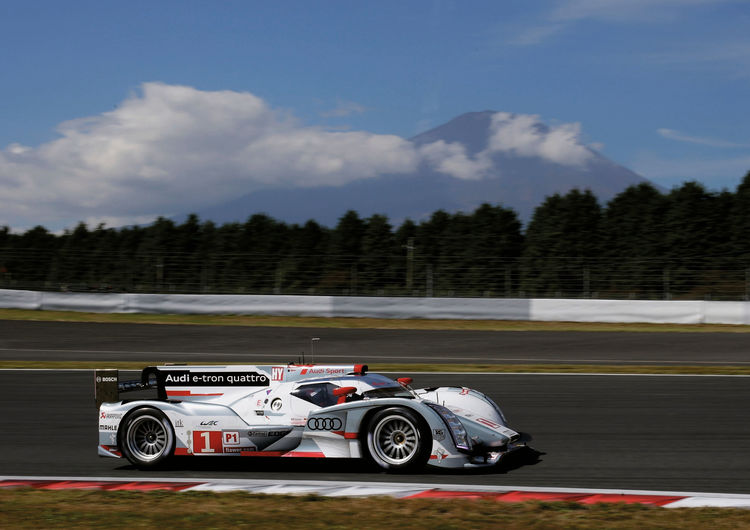 Suspense through to the end: At the finale of the FIA Endurance Championship (WEC) at Shanghai, China, on October 28, two Audi driver teams will be battling for the world champion’s title. Marcel Fässler/André Lotterer/Benoît Tréluyer, last and this year’s Le Mans winners with Audi, improved their chances of clinching the title when they finished the round in Japan as the runners-up. They are 16.5 points ahead of their team-mates Tom Kristensen/Allan McNish.
Download PDF (189 KB)
Facebook
Twitter
LinkedIn
WhatsApp

Suspense through to the end: At the finale of the FIA World Endurance Championship (WEC) at Shanghai, China, on October 28, two Audi driver teams will be battling for the world champion’s title. 32,000 fans most recently witnessed a close battle for victory in Japan. 11.223 seconds separated Audi and challenger Toyota when the cars saw the checkered flag at the Fuji 6 Hours. With that, the seventh round of the season delivered the closest result to date in the competition between the two automobile manufacturers.

Audi won the manufacturers’ classification in the new world championship as early as in August – subject to the publication of the results by the FIA. Now the Audi racers will be competing for the title in the drivers’ championship on the 5,451-kilometer Grand Prix circuit at Shanghai. Marcel Fässler/André Lotterer/Benoît Tréluyer, last and this year’s Le Mans winners with Audi, improved their chances of clinching the title when they finished the round in Japan as the runners-up. They are 16.5 points ahead of their team-mates Tom Kristensen/Allan McNish.

If the Dane and the Scotsman win the qualifying session and the final race, the leaders of the standings have to take fifth place as a minimum to secure the title, which is an achievable task: Fässler/Lotterer/Tréluyer mounted the podium six times in succession, clinching three victories in the process. All of the Audi R18 cars in the field are extremely reliable and have finished every race this year, scoring five victories and a total of 16 podium places.

Aside from the factory-fielded sports prototypes, motorsport fans in China can look forward to another highlight. The Audi R8 LMS Cup is holding rounds nine and ten together with the WEC finale at Shanghai. 16 drivers are battling for trophies and points in the company’s first one-make cup that has been held in China as of this year. The GT3 sports car delivers a power output of 411 kW (560 hp). Marchy Lee from Hong Kong is currently leading the standings.

The race weekend in China not only has a special significance for Audi from a sporting perspective. Since 2011, the country has been the largest single market for the brand based in Ingolstadt. In the first three quarters of the current year, Audi delivered 297,060 vehicles, which is 31.4 percent more than in the same period last year. Since 1988, Audi has been manufacturing vehicles at the FAW-VW joint venture in Changchun. In 2013, production operations will be launched at the new plant in Foshan, South China.

As usual, Audi will broadcast the race live on the internet for six hours at www.audi-liveracing.com, offering cockpit perspectives, telemetry data and summaries of the racing action. The “Audi Sport” iPhone and Android apps guarantee current WEC coverage on smartphones with live tickers, news, pictures and results. In addition, Audi’s racing fan community will be kept up to speed on Facebook and Twitter.

-How close will the result between Audi and Toyota be this time?
-Will Marcel Fässler/André Lotterer/Benoît Tréluyer be able to convert their lead in the standings into the title win?
-Will the winners of the season opener, Tom Kristensen/Allan McNish, manage to triumph at the finale?

Dr. Wolfgang Ullrich (Head of Audi Motorsport): “At Shanghai, we’re competing in a market that’s very important for Audi. The track there is new to all of us. A highly varied inaugural season of the FIA World Endurance Championship (WEC) is about to culminate in China. For us, it’s still about the title decision in the drivers’ championship which, after the early title win in the manufacturers’ championship, is crowning an exceptional endurance racing season for Audi. After the open race at Fuji, it’s guaranteed that we’ll be in for a thrilling finale.”

Ralf Jüttner (Technical Director Audi Sport Team Joest): “There’s only one weekend again between the round at Fuji and the finale at Shanghai – that’s putting another pretty heavy strain on the whole team. That’s why we decided not to fly back to Europe but to enjoy a couple of free days in Asia. Besides relaxing there we’re focused on fostering our team spirit. We’re very much looking forward to the race at Shanghai. In each of the past two years, we drove the season finale in China and have fond memories of the country.”

Marcel Fässler (36/CH), Audi R18 e-tron quattro #1
-Was on podium with Audi in China last year, in third place
-Is the only Audi racer who knows the track at Shanghai
“For us, the last race of what has so far been a very successful season, is now coming up. I’ve driven a race at Shanghai before, albeit not on the GP track version but on a shorter variant. It’s a great track on which we’ll no doubt have a lot of fun with our sports prototypes.”

André Lotterer (30/D), Audi R18 e-tron quattro #1
-Only knows China from running as a guest entrant at the 2011 Audi Q3 Trans China Tour
“The track is completely new to me. That’s why I want to learn it on the simulator. I’m sure it’s not an easy track. The first turn, which tapers down quite a bit, is absolutely unusual. For us, it’s about achieving a big aim: the World Championship title. Up to now, I’ve been concentrating on every single race but now the decision will be made.”

Benoît Tréluyer (35/F), Audi R18 e-tron quattro #1
-Has never competed in China before
“Shanghai is said to be a very special track. Many of the turns are relatively complicated, such as the spiraling first bend. We want to battle for race victory at the finale – it’s important for us to finish in front of Toyota. At the same time, for my team-mates and me, it’s also about the drivers’ world championship.”

Tom Kristensen (45/DK), Audi R18 e-tron quattro #2
-Together with team-mate Allan McNish took second place for Audi in China in 2010
-Has previously competed at various motorsport events in China
“It’s been a tremendous season so far which started with victory for Allan (McNish) and me at the Sebring season opener. After the round in Japan, which meant a lot to me, we’re now ending the season in China. I’ll be driving a race for the fifth time in this country: twice I ran at Zhuhai in sports prototypes, contested a race with the DTM in downtown Shanghai and competed in the Race of Champions at the National Stadium in Beijing. For the WEC finale on the challenging Shanghai GP circuit, our wish is to achieve victory.”

Allan McNish (42/GB), Audi R18 e-tron quattro #2
-Has already run twice in an Audi LMP sports car in China
“The WEC finale at Shanghai will be held on a track I don’t know yet. If you look at the layout you can see similarities to the previous circuits in Bahrain or at Fuji because most of the turns are long and driven at low speed. The race will be the high point of the season. That’s when the drivers’ world championship will be decided. For Tom and I to have any chance left at all we’ll have to clinch victory.”

The Audi drivers at Shanghai

Marcel Fässler about Shanghai: “I remember Shanghai as a very nice track. I particularly like turn 1 because you enter it at high speed in sixth gear before it tapers down and you’ve got to downshift into second. I don’t know the second track sector yet because I’ve only driven on the short version previously. In the third section, there’s a long left-hander. It’ll be great fun with our Audi R18 e-tron quattro thanks to the high downforce. In the next sector, you’ve got to take a lot of momentum onto a small straight. A narrow left-hand turn is followed by a right-hand whose radius opens up. You enter it in second gear and then upshift all the way into fourth. The turn takes us onto the longest straight at the end of which you brake hard and downshift all the way into first. When exiting the right-hand turn, traction is important because on accelerating the car continues to follow the course of the turn. On exiting the last left-hander, you’ve got to take a lot of momentum onto the start and finish straight to achieve a good lap time.”