Skip to content
We are using cookies for a better user experience.
05/12/19
Orechová Potôň/Neuburg a. d. Donau
Sport 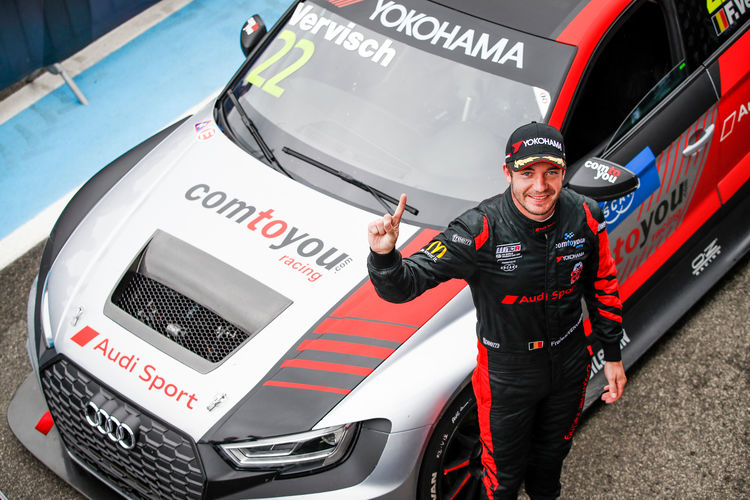 Frédéric Vervisch and Comtoyou Team Audi Sport celebrated the seventh win for the Audi RS 3 LMS in the WTCR – FIA World Touring Car Cup with Audi Sport customer racing at the Slovakiaring. At the third race weekend of the 2019 season, the Belgian got away well off the line from ninth place on a damp track in race one. In the first lap alone, he overtook seven rivals. Putting in a breathtaking charge, he swept past the leading car in lap five. Thus, Vervisch claimed his second WTCR victory after his maiden win last year at the finale in Macau. Thanks to his achievement and the results of the three other Audi Sport drivers, the marque has experienced the most successful FIA WTCR weekend so far this year. Earning 74 points, the combined points’ tally of all drivers was one more than at the season-opening round in Morocco.

“Frédéric Vervisch and the entire team of Jean-Michel Baert have done an impressive job – congratulations,” said Chris Reinke, Head of Audi Sport customer racing. “In addition to the first win of the season, we’re also thrilled with the performance of the other three Audi Sport drivers. For the first time, all of our drivers have finished in the points on one weekend. It’s very pleasing to see the Niels Langeveld’s improving form.”

Like Vervisch, Jean-Karl Vernay also made a good start into the race. The Frenchman from the Leopard Racing Team Audi Sport improved from seventh on the grid to position four. His teammate Gordon Shedden came from 16th to finish in twelfth. After coming under fire from a rival in the first lap, which resulted in a trip into the gravel, Niels Langeveld from Comtoyou Team Audi Sport was thrown from 15th place to the back of the field. In an excellent show of fighting spirit, he gained nine positions and earned his first World Cup point. In the second race, Langeveld finished eighth, making him the best Audi Sport driver for the first time this year. A very good performance of the Dutchman followed in race three: From the seventh grid spot, the 31-year-old racing driver worked his way up to fourth place in the hotly contested race.

Aside from Langeveld, Gordon Shedden was the only other Audi Sport driver to harvest points from all three races. Like his teammate Jean-Karl Vernay from the Leopard Racing Team Audi Sport, the Scotsman found his unfavorable starting position particularly challenging, after a rapidly drying racetrack in the second qualifying session had caused changeable track conditions. In the second race, both drivers managed to charge through the field: Vernay came from 19th to finish twelfth, with Shedden advancing from P22 to 13th place. In race three, the Scottish driver made up seven places to finish on 15th. Vernay retired.

The teams have very little time to prepare their racing cars for the next outing. Next weekend, the WTCR – FIA World Touring Car Cup will be contested in Zandvoort, Netherlands. The fourth of ten race weekends is the home event for Niels Langeveld who grew up just 25 kilometers from the circuit.