Skip to content
We are using cookies for a better user experience.
09/03/18
Neuburg a. d. Donau
Sports 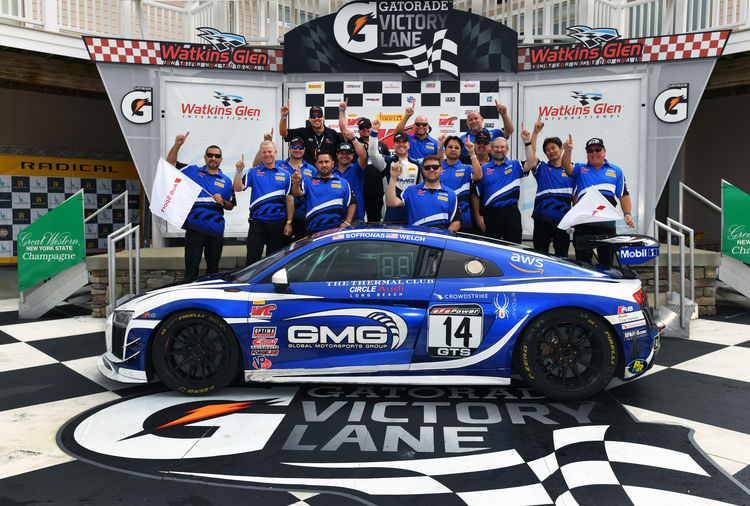 Title at Watkins Glen: The Pirelli World Challenge ended in a dream result for Audi Sport customer racing. Three weeks after James Sofronas won the SprintX classification in the Pirelli World Challenge with his teammate, Alex Welch, the driver and team principal of GMG Racing now won the overall GTS title as well. In the finale at Watkins Glen, the Californian Sofronas only had to finish in seventh and sixth position to secure the second title win of the Audi R8 LMS GT4. After 18 single races, his advantage amounted to 29 points. The race car from Audi Sport customer racing in 2018 is contesting its maiden season in customers’ hands. The Pirelli World Challenge is one of the toughest GT4 competitions worldwide. Eight marques were on the grid in the North American series and as many as 94 drivers, 87 of whom scored points, competed during the course of the year.

Podium in club sport: Jürgen Marschlich has returned with a trophy from round seven of the DMV GTC. The privateer from Team Car Collection Motorsport in an Audi R8 LMS GT4 crossed the finish line in race one at Zolder in third place.

Two Audi victories at Zolder: The seventh race weekend of the DMV GTC was a festival for Audi Sport’s customers. Ronny C’Rock won race one in an Audi R8 LMS of Montaplast by Land-Motorsport. In round two, Carrie Schreiner won ahead of Ronny C’Rock. In the Dunlop-60 race, Schreiner with fellow driver Kevin Arnold clinched second place for HCB-Rutronik Racing. Third place was secured by their teammates, Tommy Tulpe/Fabian Plentz, in another Audi R8 LMS.

Two podiums in Hungary: Frenchman Simon Gachet and Audi Sport driver Christopher Haase celebrated their best result this season on the fourth race weekend of the Blancpain GT Series Sprint Cup with Team Saintéloc Racing. The Franco-German driver duo after one hour of racing in race two at the Hungaroring finished runners-up with a gap of just 1.1 seconds. Another Audi R8 LMS saw the checkered flag behind them. The Dutch-South African driver pairing of Steijn Schothorst/Kelvin van der Linde achieved third place for Attempto Racing. Before the finale at the Nürburgring in two weeks, the situation in the standings is packed with suspense: Christopher Mies/Alex Riberas from Belgian Audi Club Team WRT, who finished fourth in Hungary, are tied on points with Mercedes drivers Raffaele Marciello/Michael Meadows at the top of the table.

Triple success in Australia: Three Audi Sport customers finished the Australian GT Trophy Series season in the top three spots of the table. In the racing series for older vehicle generations, customers rely on the first generation of the Audi R8 LMS. Nick Kelly had traveled to the finale at Winton as the leader of the standings. As the best Audi driver he achieved second place in race one. Matthew Stoupas, another Audi Sport customer, won race two, which confirmed his second place in the standings as well. Third place in the table went to Rio Nugara in another Audi R8 LMS ultra.

Podium on the Nordschleife: Team RaceIng powered by HFG celebrated a podium in the VLN Endurance Championship Nürburgring. In round six of the series, Bernhard Henzel and Rahel Frey in an Audi R8 LMS ultra crossed the finish line in position three in the SP8 class.

Suspense in the title race: On the third race weekend, the title race in the Audi Sport R8 LMS Cup clearly intensified. On the circuit of Ningbo in China, Jingzu Sun from China in race one achieved his first victory this season. Second place went to Yasser Shahin from Australia, third to Indonesian Andrew Haryanto. In race two, Bhurit Bhirombhakdi from Thailand celebrated his third victory this season while Haryanto took second place ahead of Shahin. As a result, the Thai Bhirombhakdi reduced the gap to the top of the table from eight points to six. Andrew Haryanto continues to rank in first place. While the drivers on the podium of the overall classification rely on the GT3 version of the Audi R8 LMS, GT4 models with the four rings raced in the field as well. Indonesian Anderson Tanoto won the category both times, now leading the GT4 classification.

Big advantage before the finale: Dmitry Bragin further extended his advantage in the SMP Russian Circuit Racing Series. On the sixth race weekend at Sochi, last year’s champion in round two achieved his third victory this season in an Audi RS 3 LMS. The driver from Taif Motorsport is leading the TCR Russia standings before the finale at Fort Grozny in October with a 37-point advantage. Aleksey Dudukalo from Lukoil Racing Team completed the success of the Audi customers to a one-two result and is runner-up in the standings. The day before, the Lukoil Racing customer team had clinched the first two trophies of the weekend. Ivan Lukashevich had finished second ahead of teammate Dudukalo.

Two class wins at the Nürburgring: Team Møller Bil Motorsport from Norway in round six of the VLN Endurance Championship Nürburgring won the TCR class. Atle Gulbrandsen/Kenneth Østvold/Håkon Schjærin had a 1.13-minute advantage at the finish. This was the second consecutive class win for the Norwegian Audi RS 3 LMS. Team Bonk Motorsport added another success. Hermann Bock and Michael Bonk won the SP3T classification in another Audi RS 3 LMS after four hours of racing with an advantage of 3.45 minutes.

Two trophies in Belgium: Kevin Arnold in round seven of the DMV GTC mounted the podium twice in his class in an Audi RS 3 LMS. The up-and-coming driver from Baden-Württemberg finished runner-up in both sprints at Zolder for HCB-Rutronik Racing.

Second place in Brazil: Privateers Henri Visconde/Arthur Caleffi in round four of the Campeonato Brasileiro de Endurance achieved second place in their class. The driver duo in the four-hour race at the Autodromo Velo Città in Mogi Guaçu in the Brazilian state of São Paulo drove an Audi RS 3 LMS.

Positive season finale: Round twelve of the Pirelli World Challenge ended in a TCR class trophy win for the Compass Racing Audi customer team. In the finale at Watkins Glen, JT Coupal in an Audi RS 3 LMS with a deficit of only 2.5 seconds in third place had to admit defeat by just a very narrow margin. For the 18-year-old up-and-coming driver, this was the best result in the TCR season that just ended.

Opportunity for young Belgians in the Audi RS 3 LMS: A project billed as “Don’t dream it – do it,” gives young Belgian race drivers the opportunity to apply for a cockpit in an Audi TCR touring car for the 2019 season. The RACB National Team and Team Comtoyou Racing are organizing a selection contest with support from Audi Sport. The winner will be able to compete in the full 2019 TCR Benelux racing series in an Audi RS 3 LMS fielded by Comtoyou Racing. For an entry fee of just ten euros, the candidates, who have to be Belgian nationals and between 15 and 25 years old, will be pitted against each other in simulators in an initial selection round to be held in Brussels in September. Following a semi-final, also in a simulator, the cockpit will be awarded among the six top drivers in November 2018. At the Audi site in Neuburg an der Donau premises, the hopefuls will have to prove themselves in an Audi RS 3 LMS of Audi Sport Team Comtoyou. The judging team includes no lesser than nine-time Le Mans winner Tom Kristensen. Information and applications: www.racbnationalteam.be