Second pole in a row for Audi 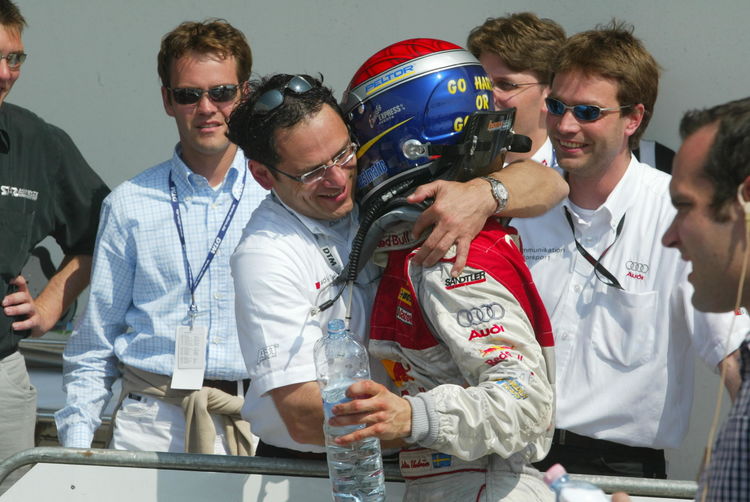 In the third race of the 2004 DTM, the Audi A4 DTM is yet again the number one challenger. In today’s thrilling qualifying session at Adria International Raceway near Venice (Italy), Mattias Ekström clinched the second pole in a row for Audi. Two weeks ago, at Estoril, the Swede had won the ‘super pole’ single timed lap as well. Three other Audi drivers, Martin Tomczyk, Tom Kristensen and, for the first time, Frank Biela, managed to move up into the top ten. Christian Abt and Emanuele Pirro will be starting from positions 13 and 16 on Sunday.

Mattias Ekström (Audi Sport Team Abt / Audi A4 DTM #5)
1st place, “Super Pole“, 1m 11.342s
“My Audi A4 was brilliant right from the start. This pole position is especially important, because overtaking is so difficult at Adria. That’s why I wasn’t too happy when my I saw my first split time during the super pole lap. I was simply too careful at the first two braking points. Fortunately, I managed to catch up again. The race will be tough, particularly when I look at the starting grid. But I won’t be as easy on my friends from Mercedes as I was at Estoril.”

Martin Tomczyk (Audi Sport Team Abt / Audi A4 DTM #6)
5th place, “Super Pole“, 1m 11.499s
“I’m satisfied with my time in the super pole run, because it was the best time I clocked during the whole weekend. But I’d certainly have wished for a place in the second row in order to be able to fight in the race from the very front. Now, I need to get off to a good start. Scoring more points is my goal for this race.“

Tom Kristensen (Audi Sport Team Abt Sportsline / Audi A4 DTM #12)
7th place, “Super Pole“, 1m 11.526s
“Even though this has been the worst result I’ve scored in DTM qualifying sessions so far, I’m satisfied with the car. I was braking too cautiously during the super pole lap, which made me lose one tenth of a second compared to my qualifying time. And one tenth, here, means at least one row on the grid.”

Frank Biela (Audi Sport Infineon Team Joest / Audi A4 DTM #45)
10th place, “Super Pole“, 1m 12.410s
“After things had been going very well during the free practice session, I was aiming to be part of the super pole. This has worked out, and that’s why I’m satisfied. The super pole lap itself was not as I’d expected it to be. I made a mistake, braking in turn 2. Nevertheless, after Hockenheim and Estoril, starting from position ten is definitely a clear step ahead.”

Christian Abt (Audi Sport Team Abt Sportsline / Audi A4 DTM #11)
13th place, 1m 11.824s
“I’m happy for Audi having clinched pole. This proves the quality of the Audi A4 DTM. I, personally, was less than a tenth of a second short of qualifying for the super pole. This shows how professional the DTM is. The race tomorrow will be long and hard. I know what you have to watch out for here and that we’ve got a very good car for the race.”

Emanuele Pirro (Audi Sport Infineon Team Joest / Audi A4 DTM #44)
16th place, 1m 11.960s
“No doubt, the car is capable of doing better than 16th place. I simply wasn’t able to do a perfect lap in the qualifying session, despite the fact that my A4 had been really good here already on Friday. I’m feeling truly sorry for the team, and I now have to make it up in the race.”

Hans-Jürgen Abt (Team Director, Audi Sport Team Abt Sportsline): “Like at Estoril, Mattias put us through a great deal of suspense, but he again made the best of it and clinched pole. I’m proud to have him on the team. The rest of the team, as well, can be satisfied: three of our cars are among the top ten.”

Ralf Jüttner (Technical Director, Audi Sport Infineon Team Joest): “Congratulations to Frank: things were certainly tight, but it was enough for the top ten. Unfortunately, Emanuele did not get a complete handle on his qualifying. Generally, though, things are looking a lot better for us than during the first two races. My thanks go to the whole team, who are fighting for us to make further progress. And they’ll continue to do that, because we’re not quite where we want to be yet. Still, our upward trend is clearly evident.”

Dr Wolfgang Ullrich (Head of Audi motorsport): “As expected, it’s an extremely close and thrilling competition. 20 cars within one second show how tightly the DTM is being fought. Matthias, yet again, pulled a phenomenal lap out of his hat. Having four cars among the top ten, we can certainly be satisfied with our qualifying result. Now, we’ve got to find a good setup for the race that will, no doubt, be very hard.”