Skip to content
We are using cookies for a better user experience.
10/19/18
Neuburg a. d. Donau/Laguna Seca
Sports

Links
{{ activeItem() }}
Twitter
08/08/20
.@LucasdiGrassi remains in the top 3 of the drivers’ standings after today’s race in Berlin. Back on track with rou… https://t.co/jumZJh5aVY
08/08/20
We moved up one position in the teams’ standings with three races to go in season 6. &gt;&gt; https://t.co/ktQ0jleme7… https://t.co/vIFnkVjXAS
08/08/20
Fanboost is open for round 9 of @FIAFormulaE in Berlin. Vote for @LucasdiGrassi and @ReneRastRacing: &gt;&gt;… https://t.co/TItLRn5TNp
08/08/20
Audi R8 LMS 1-2 victory: Belgian Audi Club Team WRT won the opening @GTWorldChEu race at @circuitomisano with Audi… https://t.co/0t2184wEQW
Audi Sport on Twitter
{{ activeItem() }}
Facebook
08/03/20
What a start to the DTM season it was for Nico Mueller! Race victory and he is currently leading the drivers’ standings. See how he experienced the weekend in his latest #DriversDiary. >> audi.com/DTM #PerformanceIsAnAttitude #ThanksToDTM
08/03/20
Fourth victory for the Audi R8 LMS in just two weeks, adding to podiums and victories for the Audi R8 LMS GT4 and Audi RS 3 LMS this past weekend. 🇩🇪 🇮🇹 🇺🇸 🇫🇷 >> audi.com/GT3 >> audi.com/GT4 >> audi.com/TCR #PerformanceIsAnAttitude
08/02/20
Another podium lockout for us today! Check out how the second race at Circuit de Spa-Francorchamps has unfolded. >> audi.com/DTM #PerformanceIsAnAttitude #ThanksToDTM
08/02/20
Leading the pack. >> audi.com/DTM #PerformanceIsAnAttitude #ThanksToDTM
Audi Sport on Facebook 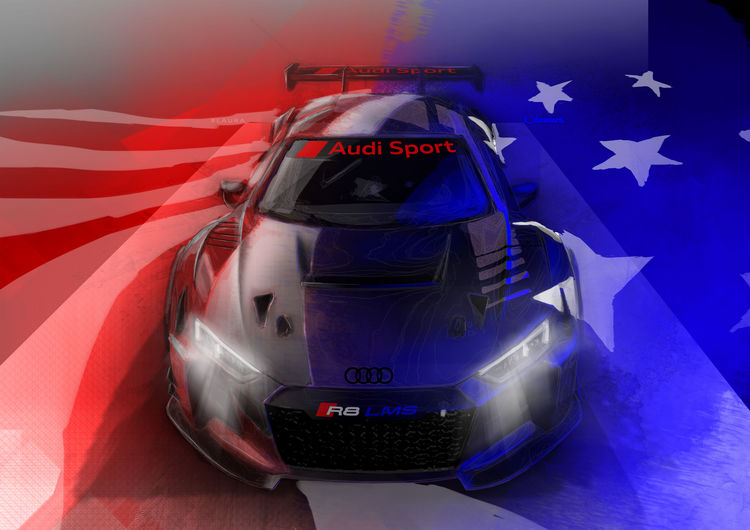 Audi will offer fans not just one but several treats at the Intercontinental GT Challenge (IGTC) finale in California from October 26 to 28: Besides the GT3 model, the GT4 version of the Audi R8 LMS and the Audi RS 3 LMS TCR race car will be on the grid at Laguna Seca for the California 8 Hours. In addition, the audience can look forward to a visual surprise: For the first time, the liveries of the three Audi GT3 sports cars will complement each other to create a total picture in the style of the American flag.

Title defender Audi adapts the IGTC idea not only in a sporting sense but visually as well: The only racing series with one round per continent stands for international competition with strong local emphasis. The track at Laguna Seca has been a synonym for a great sports car tradition in global racing. The fluid track configuration and sections such as the famous Corkscrew combination of turns are popular with drivers, fans and photographers. Audi clinched eight sports car victories in the era of the Le Mans sports prototypes at Laguna Seca between 2000 and 2008, and in 2017, won the inaugural event of the California 8 Hours with the R8 LMS. Now the brand is returning to California with exceptional liveries: When the three Audi R8 LMS cars are standing side by side the fans can recognize the Stars and Stripes of the American flag on the body surfaces. “We’ll only unveil this surprise at the venue,” says Chris Reinke, Head of Audi Sport customer racing. “We’re sure that this unique design will fascinate the fans.”

Audi Sport Team Land is fielding a race car with Audi Sport drivers Christopher Haase/Kelvin van der Linde/Christopher Mies (D/ZA/D). Audi Sport Team WRT is traveling to America with Audi factory driver Robin Frijns (NL), Audi Sport drivers Dries Vanthoor (B) and Markus Winkelhock (D), and Stuart Leonard/Sheldon van der Linde/Alex Riberas (GB/ZA/E). Title defender Markus Winkelhock and his compatriot Christopher Haase are currently trailing the front runners in the standings by 18 points. 25 points are awarded for victory. In the manufacturers’ classification, Audi is separated from Mercedes-AMG by a nine-point gap. Each brand can still score a maximum of 43 points. In the series that has been held since 2016, Audi with its drivers remained unbeaten in the manufacturers’ and drivers’ classifications for two consecutive years.

In addition to the GT3 sports cars, the GT4 class and the TCR category are enhancing the California 8 Hours this year. Seven marques are represented in the GT4 field for production-based sports cars. The two customer teams GMG Racing and Rearden Racing rely on the Audi R8 LMS GT4. GMG Racing team principal and driver James Sofronas is sharing the cockpit with Jason Bell and Andrew Davis. Sofronas, since August, has won three drivers’ titles plus the teams’ title in the Pirelli World Challenge with the Audi R8 LMS GT4. They marked the first championship wins of Audi Sport customer racing’s most recent race car that subsequently won titles in the European Championship and in France as well. Team Rearden Racing is fielding two of these race cars and has signed the driver pairings of Jeff Kearl/Vesko Kozarov and Jeff Burton/Jessica Burton/James Burke. Finally, Team M1GT Racing is putting an Audi RS 3 LMS for Walt Bowlin/Jerimy Daniel/Lars Viljoen on the grid. The TCR race car won its class in North America in the Pirelli World Challenge in 2017. In 2018, it won the TCR classification in the IMSA Continental Tire SportsCar Challenge.