{{ activeItem() }}
Twitter
02/27/21
MEDIAINFO: Formula E opener, part two: strong performance, meagre haul &gt;&gt; https://t.co/om2aFy3arY… https://t.co/tv3hFrhT8H
02/27/21
After a few post-race penalties, including @ReneRastRacing, our final positions are: P8 @LucasdiGrassi and P17 René… https://t.co/hipfjdCpkx
02/27/21
Time to race: #DiriyahEPrix starts at 20:03 local time (18:03 CET). Watch &gt;&gt; https://t.co/YfIrR1WG7O Timing &gt;&gt;… https://t.co/HYzcps2P9H
02/27/21
On the grid and ready for the second race in Diriyah. &gt;&gt; https://t.co/ktQ0jleme7 #FutureIsAnAttitude… https://t.co/uIorLKN3ij
Audi Sport on Twitter
{{ activeItem() }}
Facebook
02/27/21
We are saddened to hear the news about the passing of Hannu Mikkola, a longtime friend of Audi Sport and the World Rally champion with Audi in 1983. We send our sincere condolences to his family and friends.
02/26/21
Strong pace for the Audi e-tron FE07 in Diriyah: Fourth place for René Rast and Lucas Di Grassi moved forward seven places to ninth. Both cars in the points and tomorrow we race again. >> audi.com/FormulaE #FutureIsAnAttitude #DiriyahEPrix
02/25/21
Audi Sport ABT Schaeffler in the 2021 ABB Formula E World Championship. First-ever Formula E night races coming up on Friday and Saturday at 20:03 local time (18:03 CET). Broadcast info >> fiaformulae.com/watch #FutureIsAnAttitude #DiriyahEPrix
02/24/21
Three E-Prix so far in Diriyah since 2018 with our highlight in 2019: Lucas Di Grassi on the podium with a runner-up finish. Aiming for more this week in the first two night races in ABB Formula E history, February 26–27. >> audi.com/FormulaE #FutureIsAnAttitude #DiriyahEPrix
Audi Sport on Facebook 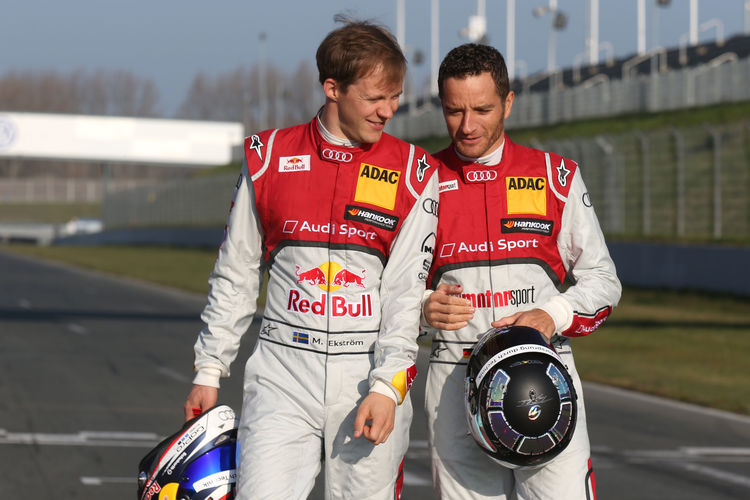 Both have won the DTM twice before and both have been on the stop step of the podium at Oschersleben as well. Still, the coming weekend differs a lot for the two Audi drivers Mattias Ekström and Timo Scheider.

Ekström is traveling to the Motorsport Arena as the leader of the standings. Scheider, after a compulsory break, is returning to the cockpit of his Audi RS 5 DTM on the track he celebrated his first victory on in 2008.

“I’m looking forward to my comeback in the DTM,” Scheider said at an Audi telephone press conference on Wednesday. “Obviously, I’ve got no chance of winning the championship anymore, but my goal remains unchanged: winning races. My team-mate Mike Rockenfeller showed at Moscow that this is possible with a Phoenix Audi – and, actually, we’ve always been on a similar level so far this season.”

Mattias Ekström currently has a six-point advantage over Pascal Wehrlein. That the youngster just recently stated he felt no pressure, surprises Ekström, the old hand, a little: “Ever since I’ve been 15 years old, I’ve been putting pressure on myself – that boosts performance. Obviously, it’s always fun to drive a race car. But it turns into tremendous fun when you battle for victories and trophies. It’s a good thing that in the DTM a few years of experience under your belt give you an advantage over the young guns.”

Ekström’s aim for Oschersleben: “A perfect weekend. With the high additional weight, qualifying is particularly difficult. In the race, I can cope with full fuel tanks and degrading tires. I’ve got a positive feeling with my engineer at the moment: we’re going to manage a good set-up. That helps.”
Download PDF (54.8 KB)
Facebook
Twitter
LinkedIn
WhatsApp
Back to top