Links
{{ activeItem() }}
Twitter
08/05/20
RT @FIAFormulaE: Free Practice 1 - LIVE from Round 6 of the 2020 #BerlinEPrix ⚡️ #ABBFormulaE #SeasonSixFinale https://t.co/2jDV82ZADU
08/05/20
Free Practice 1 in Berlin begins at 09:00 CEST. Live stream &gt;&gt; https://t.co/oiyfaoWNn0 Live timing &gt;&gt;… https://t.co/UKtN2L2q5p
08/05/20
.@FIAFormulaE has never been just about racing, it is racing with a purpose. #PositivelyCharged &gt;&gt;… https://t.co/AhVsRsmOlM
08/05/20
Good morning and welcome to the first race day of the six-pack @FIAFormulaE showdown in Berlin. &gt;&gt;… https://t.co/j8U1tCCPEB
Audi Sport on Twitter
{{ activeItem() }}
Facebook
08/03/20
What a start to the DTM season it was for Nico Mueller! Race victory and he is currently leading the drivers’ standings. See how he experienced the weekend in his latest #DriversDiary. >> audi.com/DTM #PerformanceIsAnAttitude #ThanksToDTM
08/03/20
Fourth victory for the Audi R8 LMS in just two weeks, adding to podiums and victories for the Audi R8 LMS GT4 and Audi RS 3 LMS this past weekend. 🇩🇪 🇮🇹 🇺🇸 🇫🇷 >> audi.com/GT3 >> audi.com/GT4 >> audi.com/TCR #PerformanceIsAnAttitude
08/02/20
Another podium lockout for us today! Check out how the second race at Circuit de Spa-Francorchamps has unfolded. >> audi.com/DTM #PerformanceIsAnAttitude #ThanksToDTM
08/02/20
Leading the pack. >> audi.com/DTM #PerformanceIsAnAttitude #ThanksToDTM
Audi Sport on Facebook 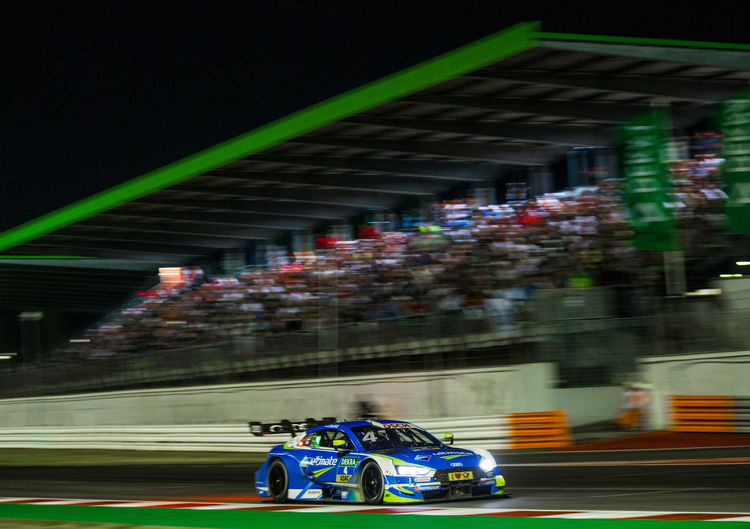 Competing for Audi Sport Team Abt Sportsline, Audi driver Robin Frijns has achieved the first podium of his DTM career in Misano, Italy. At the first ever floodlit night race in DTM history, the Dutchman ploughed from twelfth on the grid to finish second at the wheel of his Audi RS 5 DTM. With four cars in the top ten and a total of 42 points, Audi has yielded its best result of the season so far.

After a rainy qualifying, the race took off on a damp racetrack. All six Audi drivers started on wet tires and switched to slicks between the third and the sixth lap. After a chaotic early stage with two short safety car phases, Robin Frijns launched his big show. One position at a time, the Dutchman fought his way up the field. With six laps to the flag, he overtook two rivals at once on the outside and three corners before the finish even managed to sweep past the Mercedes-Benz of Edoardo Mortara, who until then had been running in second.

“That was a tough and difficult race,” said Frijns, who has finished in the points six times so far in his maiden DTM season and is now the third-best Audi driver in the points. “First there was the damp track, then two safety car phases, topped off with a whole lot of chaos. I was pleased that the car stayed in one piece and was ultra fast over the entire race distance. That enabled me to overtake all those cars and also grab second place in the last lap. A great day!”

Loïc Duval from Audi Sport Team Phoenix and Frijns’s teammate Nico Müller put in equally inspired charges through the field and rounded off the strong Audi result with positions four and five. In the final phase, Müller struggled with a faulty DRS system, which partially opened the rear wing independently. Duval achieved his best result of the season, despite being “spun” by a competitor. Scoring tenth place, Mike Rockenfeller also finished in the points.

Audi Sport Team Rosberg was forced into retirement: René Rast and his teammate Jamie Green became entangled in an accident caused by another competitor after the second restart, which resulted in both Audi RS 5 DTM race cars suffering serious damages.

“This great race offered everything,” said Dieter Gass, Head of Motorsport at Audi. “Almost all cars started on wet tires. Safety cars. Overtaking manoeuvers. Many tough fights, which I felt were mostly fair. Robin’s (Frijns) performance at the end of the race was simply fantastic. We know Edoardo Mortara pretty well and we know that it’s almost impossible to overtake him – especially three corners before the finish. Still, Robin did it. And the performances from Loïc (Duval), Nico (Müller) and ‘Rocky’ were good. All four cars that made it to the finish scored points. It’s a shame that Jamie (Green) and René (Rast) were thrown out of contention through no fault of their own. Both of them were looking good after the restart. But we’re pleased with second place today and we’re looking forward to tomorrow.”

Sunday’s race in Misano will also be contested under floodlights. The race takes off at 22.30 hrs CEST. In Germany, the TV station kabel eins broadcasts the race live from Italy at 22.15 hrs.