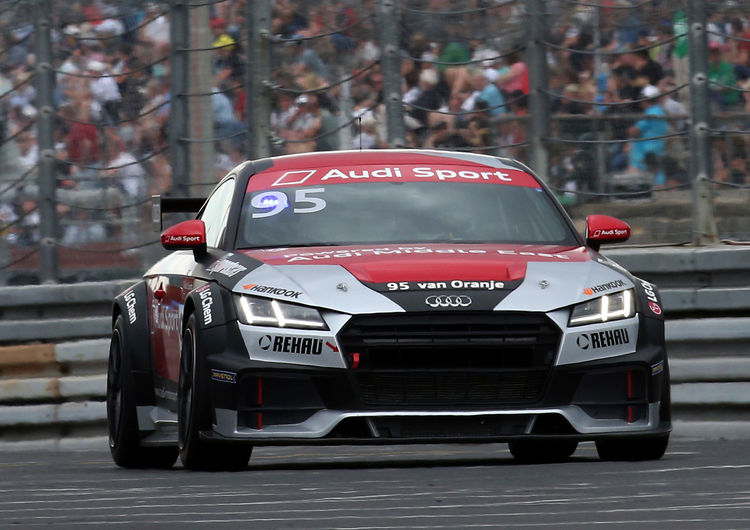 For the first time in its short history, the Audi Sport TT Cup appears in the Netherlands. As part of the DTM support program, the Audi one-make cup stages two races – one on Saturday, July 16 and one on Sunday, July 17 – around the legendary Zandvoort track.

Summer, sun and sand is the name of the game during the fourth of seven Audi Sport TT Cup race weekends – and obviously a healthy dose of thrilling motorsport will be delivered as well. As well as high-speed sections, Circuit Park Zandvoort offers plenty of challenging sectors. “The circuit at Zandvoort is something very special, as it’s only a stone’s throw away from the North Sea,” says Project Leader Philipp Mondelaers. “From time to time, the wind blows sand from the dunes across the track and provides our talented young drivers with challenging conditions due to the ever changing grip levels.”

The Audi Sport TT Cup organization team has pulled off a coup in the guest starter classification. The Dutch prince Bernhard van Oranje (NL) is on parade in his home race. The 46-year old royal is the second son of Pieter van Vollenhoven and Margriet van Oranje-Nassau, the Princess of the Netherlands. Two top-class athletes will challenge him: Adrien Théaux (F) and Peter Fill (I) from the Audi FIS Ski World Cup bring a breath of winter sport to the beach at Zandvoort. The 31-year old Théaux won the bronze medal in the Super G at the Alpine World Ski Championships 2015 in Vail and Beaver Creek, and also celebrated three victories in the Downhill World Cup. The 33-year old Fill was World Championship runner-up in Super G in 2009, and became the first Italian to win the Downhill World Cup in the 2015/16 season.

Following his strong performance at the Norisring, Dennis Marschall has now taken the overall championship lead in the Audi Sport TT Cup. The young German is, however, only five points ahead of the Finn Joonas Lappalainen. The 17-year old Sheldon van der Linde (ZA) follows as first Rookie in third place. “The Norisring showed just how close the field is in the Audi Sport TT Cup,” says Chris Reinke, Head of Audi Sport customer racing. “I expect to see close and hotly contested races in Zandvoort, also because the drivers from last season’s lineup have no advantage over the newcomers.”

The Zandvoort race weekend starts on Friday, 15 July at 15.50 CEST with free practice. Qualifying starts on Saturday at 8.15, followed by the first 30-minute race at 12.05. The second race is held on Sunday at 10.20 and also runs for a maximum of 30 minutes.

Both races are broadcast in livestream on www.audimedia.tv in the internet as well as via the SmartTV App ‘Audi MediaTV’. As a result, spectators can follow the Audi Sport TT Cup worldwide live on the television screen via Samsung, LG, Amazon Fire and Android TV. The free TV channel SPORT1 shows the races live on Saturday from 12.00 as well as on Sunday from 10.15.