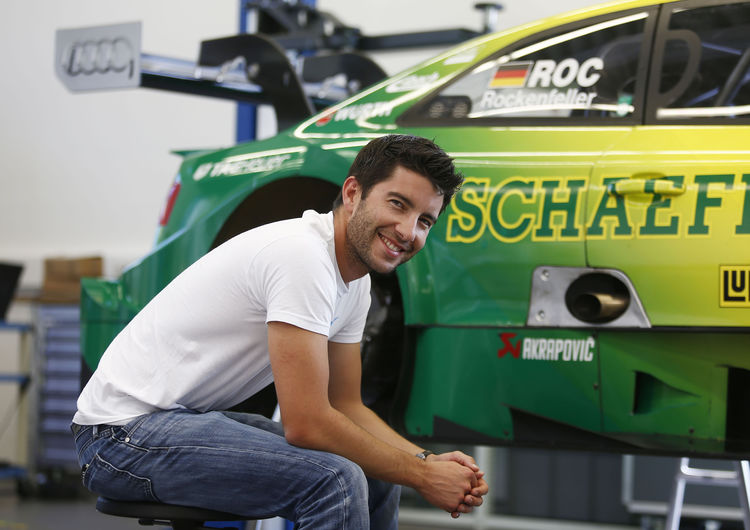 Mike Rockenfeller has extended his biography by a decisive item in the second from last round of the 2013 DTM season at Zandvoort (the Netherlands). The 29-year-old Audi factory driver clinched an early title win in the most popular international touring car series DTM. A portrait of ‘Rocky.’

“My aim this year is simple: Of course I want to become champion,” said Mike Rockenfeller at the beginning of the season. The absence of the mischievous grin that is typically found on his face showed that he was not uttering a hackneyed phrase but was dead-serious. And now, after six DTM years, he has actually made it happen. Mike Rockenfeller from Audi Sport Team Phoenix sealed the title one race before the finale at Hockenheim on October 20. Following triumphs in the Porsche Carrera Cup (2004) and in the FIA GT Championship (2005) plus victories in the classic 24-hour races at Le Mans and Daytona (2010), this marks the next success in his career.

A surprise Champion? Not really. Last year – his second one in a current-generation DTM car – in fourth place of the standings, he was the best Audi driver and thus finally joined the group of favorites for the title. In the current season, he underpinned his Championship ambitions at an early stage. On winning round two at Brands Hatch (GB), the driver of the yellow-green Schaeffler Audi RS 5 DTM captured the top spot in the standings for the first time and is the only driver who has scored points in all nine races of the season so far – consistency having been one of the keys to success.

Even when, for a change, Rockenfeller was not cheering on the podium – as he was as the runner-up at Lausitz and on clinching his historic victory at the DTM’s premiere at Moscow – he set exclamation marks as a race driver. At the Red Bull Ring, ‘Rocky’ battled his way forward from 13th to fourth place. The city street race at the Norisring he tackled from the last row on the grid following a transmission change and in the end took a strong fifth place. On a wet track at the Nürburgring, Rockenfeller had to get out of a rival’s way in turn one and as a result found himself running at the rear of the field. Thanks to a tactical move by his squad at the command post ‘Rocky’ recovered and saw the checkered flag in fourth place.

Stay calm and relaxed even when all seems to be lost. Never lose your cool. Never give up. An exceptionally high basic speed, combined with a healthy dose of self-confidence and optimism that inspires the team even in difficult times – aside from his high level of technical knowledge, strong team spirit and, naturally, plenty of talent are the major strengths of the new DTM Champion.

“Rocky not only has the speed you need for titles in the DTM but drives in an incredibly clever way as well,” says Team Director Ernst Moser as he praises the level-headedness of his fast protégé. “Obviously, he’d love to win every race. But, not least thanks to his wealth of experience, Mike knows when it’s more prudent not to force the issue in a situation.” The perfect interaction between Rockenfeller and the engineers of Audi Sport and Audi Sport Team Phoenix is another element of success that Moser has identified. “Rocky has the ability to provide very precise descriptions of how the Audi RS 5 DTM performs in different track sectors and thus can squeeze the optimum out of the car together with the technical crew,” explains the team boss and, this said, goes on to name one of Rockenfeller’s weaknesses. “Sometimes he goes overboard with his tendency toward perfectionism and puts himself under nervous pressure. But whenever this happens his engineer Jürgen Jungklaus quickly brings him back to reality.”

Mike Rockenfeller gathered initial experience in a car at the tender age of eight when he was driving a VW beetle around the grounds of his grandparents’ farm. When, at the age of ten, he climbed into a kart for the first time just for fun he immediately realized: “Racing is my great passion.” Following six years in karting, Rockenfeller switched to Formula König and immediately made a strong showing on clinching the pole position and fourth place in the first-ever car race in his life. Just a little later, Porsche secured the services of the budding talent that had just come of age. Together with the Swabian marque ‘Rocky’ competed in the USA as well and developed a liking for the country and its traditional race tracks such as Laguna Seca that has lasted to this day. December 2006 marked the beginning of a new chapter in Rockenfeller’s career. Head of Audi Motorsport Dr. Wolfgang Ullrich signed the German, thus paving the way for him to achieve the biggest successes his career.

“Mike’s not only a fast race driver but a perfect fit for Audi outside the cockpit as well,” says Dr. Wolfgang Ullrich. With his on-track performances – above all, obviously, his victory at Le Mans and now his DTM title – he has more than fulfilled all the hopes we’ve pinned on him. In all his years with Audi, Mike’s had to cope with a few setbacks, so that makes our joy about his title even greater. Everybody at Audi Sport is delighted for him to have achieved this success.”

As a way of balancing his turbulent daily life as a race driver, Rockenfeller values the decelerating effect of country life. Rockenfeller, who grew up in Neuwied in the state of Rhineland-Palatinate with both sets of grandparents being farmers, is now living in Landschlacht on the Swiss shore of Lake Constance with his partner Susanne. Enjoying a meal at a good restaurant, watching a movie at a theater or simply lounging around all day wearing shorts, a T-shirt and flip-flops – these are the ways in which he prefers to recharge his batteries for the next races in the little bit of free time he has. An environment he is used to, a home – is important to him. That is why he takes his ‘own four walls’ in the form of his motorhome to the track whenever he can. There is just one catch about it: He does not have the right driver’s license that would allow him to move the large vehicle. Finally getting this license, besides winning the DTM title, has been at the very top of his agenda for 2013. So his sights are now set on the next aim.