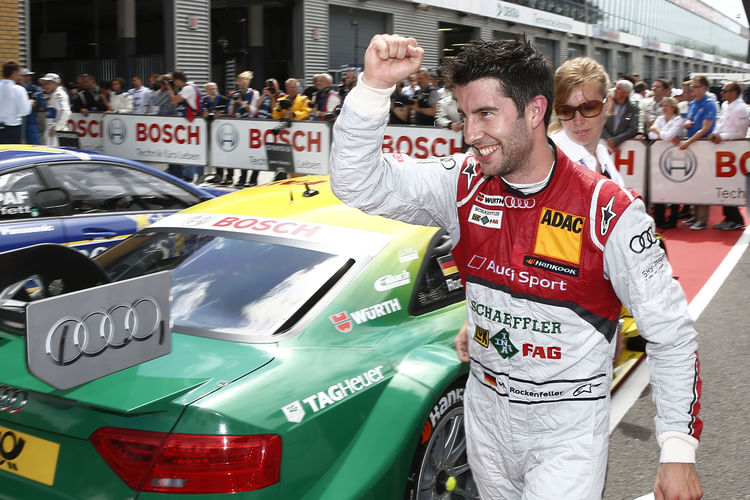 Second place, fastest lap, best pit stop and lead in the overall standings: With a strong race at the Lausitzring, Audi driver Mike Rockenfeller took the lead of the DTM standings in front of 65,000 spectators (throughout the weekend).

From position six on the grid, ‘Rocky’ in the Schaeffler Audi RS 5 DTM of Audi Sport Team Phoenix advanced to finish the race in second place. The 2010 Le Mans winner switched from standard to option tires after just four laps and from that moment was the fastest driver in the field. He overtook Mercedes driver Robert Wickens and subsequently put pressure on the race leader Gary Paffett. After the second pit stop, the Audi driver fully concentrated on bringing home his second place – and thus securing the lead of the standings.

“’Thank you to Audi and to Team Phoenix: My car was absolutely fantastic today, especially on option tires,” said Mike Rockenfeller. “On standard tires, it was a bit more difficult, but we had a great strategy and perfect pit stops. In the end, Gary (Paffett) was a bit faster, but we scored important points for the Championship. It was a good race for us. I’m really pleased.”

Jamie Green in the Red Bull Audi RS 5 DTM of Audi Sport Team Abt Sportsline finished fifth to clinch his first points since switching to Audi. Green started on option tires and up to the first pit stop on lap 24 was running in third place. His team-mate Mattias Ekström was racing with a completely different strategy. The Swede made his two pit stops within the first eight laps and drove the remaining 44 laps on the softer option tires. These tactics caused the two-time DTM Champion to advance from grid position 18 to eighth place. In an extremely fierce duel on the last lap, Ekström nearly managed to snatch seventh place from title defender Bruno Spengler. Both cars crossed the finish line side by side.

“We can be pleased with today’s result,” said Dieter Gass, Head of DTM at Audi Sport, summing up the outcome. “Mike (Rockenfeller) drove another really brilliant race today. He made no mistakes and was running with a good strategy. Jamie (Green) scored his first points as an Audi driver. Mattias Ekström managed an amazing recovery. In total, four of our cars finished in the points. In four weeks from now, an Audi driver will be traveling to the Norisring as the leader of the standings. We’re going to work hard on showing a strong performance at our home race too.”

Prior to that, at the Le Mans 24 Hours, Audi will be battling for another victory with three Audi R18 e-tron quattro cars in the world’s most important endurance race.