‘Rocky’ and ‘Eki’ shine with recoveries 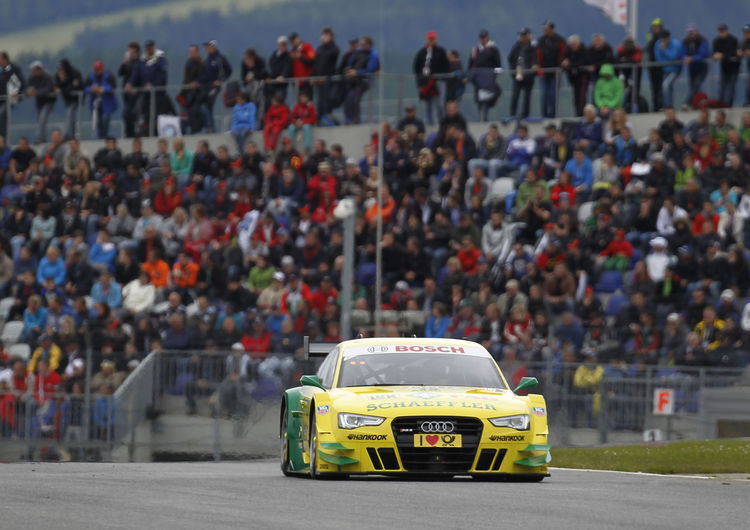 44,000 spectators (throughout the weekend) in the sold-out grandstands at the Red Bull Ring in Spielberg saw a gripping DTM visit to Austria, at which the two Audi drivers Mike Rockenfeller (Audi Sport Team Phoenix) and Mattias Ekström (Audi Sport Team Abt Sportsline) shone with recoveries.

With different strategies Mike Rockenfeller in the Schaeffler Audi RS 5 DTM and Mattias Ekström in the Red Bull Audi RS 5 DTM advanced from grid positions 13 and 15 to fourth and fifth place. In doing so, both thrilled the fans at Spielberg with spectacular overtaking maneuvers.

After qualifying, Rockenfeller had been moved back by five positions on the grid after having failed to sufficiently reduce his speed in a dangerous sector in Saturday morning’s free practice session – a controversial penalty, which did not, however, cause the Audi driver, who had traveled to Spielberg as the leader of the standings, to lose his cool.

The 2010 Le Mans winner started on standard tires and switched to the softer option tires as early as on lap five. From this moment on, his Schaeffler Audi RS 5 DTM was almost consistently one of the fastest cars in the field. On making his recovery, Rockenfeller overtook the two BMW drivers Augusto Farfus and Dirk Werner, among others. In the end, ‘Rocky’ was lacking only 2.679 seconds to clinch a podium result.

“If you advance from 13th place on the grid to fourth in the DTM you can be pleased,” said Rockenfeller, who as the runner-up in the overall standings is trailing Spielberg winner Bruno Spengler with a gap of just twelve points. “It’s a shame that we were penalized yesterday because today it was obvious what would have been possible with my RS 5 DTM. The car was a dream, the strategy was brilliant. ‘Thank you’ to Audi and to Team Phoenix: We’re battling for the championship!”

A similarly strong performance was shown by Mattias Ekström, who made both of his pit stops early on and then moved forward on option tires position by position. Shortly before the end of the race, he bumped the BMW of Augusto Farfus in a remarkable maneuver with slight contact from fifth place.

Major misfortune struck the Audi drivers who had started from the best spots on the grid. Edoardo Mortara in the Playboy Audi RS 5 DTM of Audi Sport Team Rosberg overtook the BMW of Marco Wittmann, who had started from the front row, but immediately had to let him pass again because, in the opinion of the sport stewards, he had run too far on the outside in turn one and gained a position in the process. On lap 22, Mortara was subsequently bumped off the track by Wittmann in a fierce duel. A tire and the steering system of his RS 5 DTM were damaged in the incident. Instead of on the podium, Mortara finished the race in 15th place.

Timo Scheider (AUTO TEST Audi RS 5 DTM) was running in the top five when he was forced to pit early due to a puncture on his right front tire. An unfortunate second pit stop sealed the disappointing 16th place of the two-time DTM Champion. Filipe Albuquerque (Audi Financial Services RS 5 DTM), who like Scheider had started from the third row, dropped back from sixth to 17th place due to an unfortunate strategy.

Adrien Tambay (Audi ultra RS 5 DTM), having started from the ninth row, barely missed a point on finishing in eleventh place. Miguel Molina (Audi RS 5 DTM) by setting fast lap times and making two late pit stops advanced from 20th to 14th place. Jamie Green (Red Bull Audi RS 5 DTM) was running in third place when he lost a lot of ground due to a problem at the first pit stop and finished the race in 18th place.

“In my opinion, we were beaten a bit below our potential today – especially in view of how Mike (Rockenfeller) and ‘Eki’ stormed forward from grid positions 13 and 15,” said Dieter Gass, Head of DTM at Audi Sport. “After the controversial penalty yesterday, ‘Rocky’ made the best of his situation and definitely continues to be in contention for the title race. That Marco Wittmann was not punished for his action against Edoardo Mortara is hard for me to comprehend – this action destroyed Edo’s race. Timo (Scheider), after a strong early phase, suffered misfortune in the pits again. We can only apologize to him for that.”