Robin Frijns second with Audi in Macau on making his debut 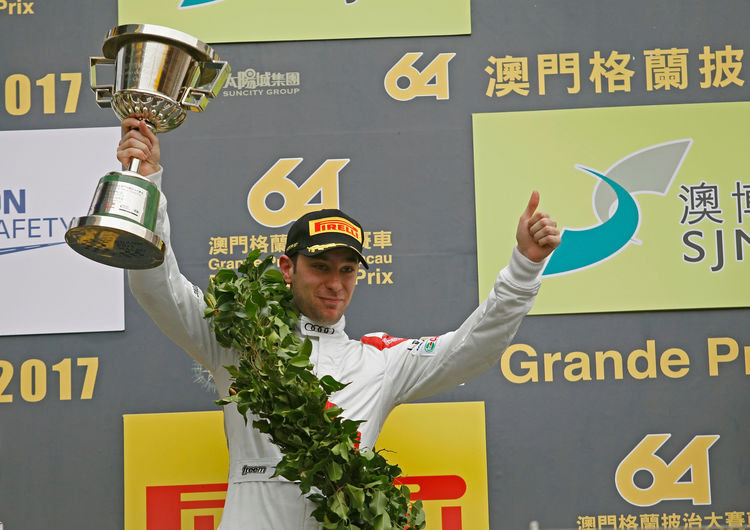 Audi Sport customer racing achieved a result that ended the FIA GT World Cup on a positive note for the brand. Following four victories in Macau to date, title defender Audi had to admit defeat by only 0.618 seconds this year.

Once again, the tradition-steeped city street race in the Asian metropolis lived up to its reputation of being unpredictable because the narrow track does not forgive even the slightest driving mistake. In qualifying, Robin Frijns from Audi Sport Team WRT dropped to position 17 in the field of 20 entrants after having touched the track barrier. His teammate, Nico Müller, qualified for position five on the grid as the best Audi driver. In the qualification race on Saturday, a competitor with an accident caused a veritable chain reaction on the narrow and challenging circuit to which eleven of the following cars fell victim – including the four Audi R8 LMS cars of Nico Müller from Audi Sport Team WRT, Markus Pommer from Team Aust Motorsport, and Lucas di Grassi and Fabian Plentz from HCB-Rutronik Racing. Robin Frijns was the only Audi driver to remain nearly unharmed, drove the fastest race lap following the restart and achieved position four.

During the night from Saturday to Sunday, the teams in a joint effort repaired two of the four heavily damaged Audi R8 LMS cars and put Frijns’ race car back into perfect condition as well.

In the FIA GT World Cup race on Sunday, Robin Frijns, on making his Macau debut, emphasized his class as a driver once again. He prudently kept clear of the duels at the front of the field, which resulted in various damaged vehicles, penalties and accidents, advanced to second place and posted the second-fastest race lap. It was three tenths of a second faster than the fastest lap of the subsequent winner, Edoardo Mortara, to whom Frijns had to admit defeat by only six tenths of a second at the finish. Nico Müller was unable to avoid a competitor who had spun in front of him, whereas Lucas di Grassi retired after contact with the track barrier.

“This was a chaotic, though ultimately positive, conclusion of an outstanding GT season,” said Chris Reinke, Head of Audi Sport customer racing. “Following our major endurance race victories in the 24-hour races at the Nürburgring and at Spa, in the California 8 Hours, plus the class victory in the Petit Le Mans race at Road Atlanta, we would have liked to end the season with a victory in the sprint discipline as well. Unfortunately, it didn’t quite work out that way. Still, sincere congratulations to Audi Sport Team WRT and to Robin Frijns on his strong debut performance.”

In addition to the individual endurance racing successes, Audi clinched an amazing 14 drivers’ titles in various championships around the globe with its customer teams this season. Currently, Audi Sport customer racing is preparing for the 2018 season beginning in January in which a model range of three race cars for customer sport teams, the Audi RS 3 LMS, the R8 LMS GT3 and the R8 LMS GT4, will be available for the first time.