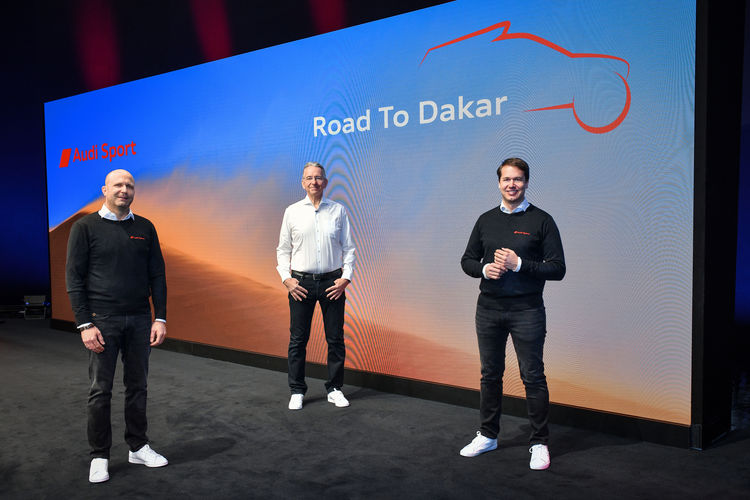 Audi has made important steps on the way to its debut in the famous Dakar Rally in January 2022. The concept of the innovative prototype for the world’s toughest cross-country rally has almost been concluded. The first tests are planned for the middle of the year. Project management for the company’s factory motorsport commitments has been taken over by Andreas Roos, who was most recently responsible for the successful DTM program at Audi Sport.

“With the Dakar project, we at Audi remain true to our philosophy of using new technologies in motorsport for the first time that are groundbreaking for future road cars,” says Julius Seebach, Managing Director of Audi Sport GmbH and responsible for all motorsport activities of Audi. “In our rally history, for example, this was the quattro drivetrain, and now we will test components for future electric drivetrains under extreme conditions at the Dakar Rally. At the same time, we offer exciting customer and fan experiences.”

“The Dakar project is a huge challenge for the entire team,” says Andreas Roos. “We have a tight schedule to implement our innovative concept. We are the first car manufacturer to tackle the Dakar Rally with an electric drivetrain. Everyone in the team is working flatout so that we are ready to go in time for the 2022 Dakar.”

The innovative prototype uses the motor generator unit (MGU) from the current Formula E car that Audi developed from scratch for the 2021 season. Three motors will be used: “We will have one MGU on the front axle and one on the rear axle. A third MGU serves as a generator to charge the high-voltage battery while driving,” says Roos. “Of course, we have to make modifications, because the desert has different challenges than in the cities where we are currently racing in Formula E: jumps, sand, the very long stages. But we can basically build on the expertise from Formula E and also from our Le Mans prototypes with the e-tron quattro.”

Audi is also developing the high-voltage battery in-house. In Formula E, this is a spec part from a supplier for all of the teams. The energy for charging the battery is supplied by the four-cylinder TFSI engine from the DTM. “This engine is incredibly efficient and state of the art in terms of weight and consumption,” says Andreas Roos. “The important thing is: our drivetrain is fully electric. The TFSI engine is only used to charge the batteries on the special stages. The battery has to be charged while driving, as there are currently no other options to do so in the desert.” Audi plans to run fully electric on all the liaison stages.

“The Dakar is unique and one of the last great adventures in the world,” says Sven Quandt, who will be running the operation at the Dakar Rally with his Q Motorsport team, together with Audi Sport. “I’m convinced that a brand can gain a lot from participating in the Dakar Rally, especially if you choose an innovative path like Audi has commited to with the electric drivetrain.”

“A good partner strategy is crucial for success in motorsport,” says Julius Seebach. “In Q Motorsport, we have gained an experienced partner with proven Dakar expertise. We plan to present our driver line-ups, which are also very important, in May.”

The first prototype for the Dakar Rally is currently being built at Audi Sport in Neuburg an der Donau. The roll-out is scheduled for the end of June, followed by the world premiere in July. Afterwards, an intensive testing phase is planned before Audi’s first Dakar Rally in January 2022.