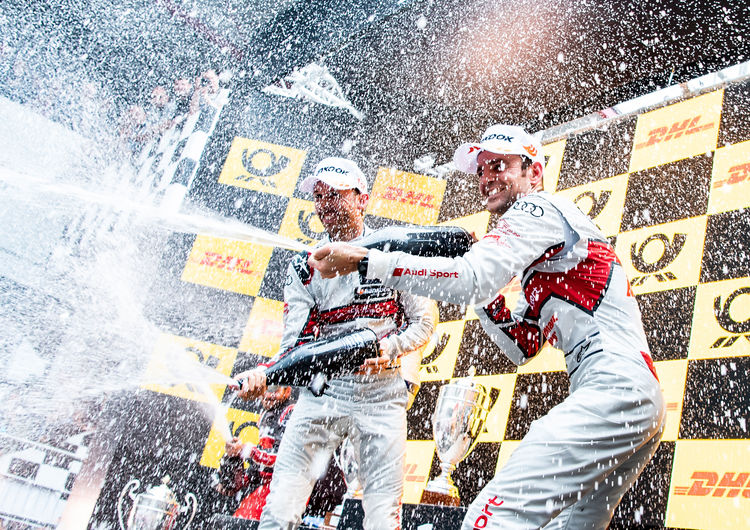 For Rast, this marked the twelfth DTM triumph in total, the eighth in the last ten races, plus a very special one. Following his retirement on Saturday due to a damaged intercooler, his team replaced the engine of his Audi RS 5 DTM overnight as a precaution. “The guys worked up until the early morning hours,” said Rast. “Even so, my car was immediately perfect again in qualifying on Sunday. A big thank you goes to the guys from my Team Rosberg, and to Audi Sport, who practically prepared the car from scratch again.”

Rast missed pole position by just six thousandths of a second. In the race, he put pressure on pole sitter Sheldon van der Linde in a BMW straight from the start and overtook the South African on the eleventh of 39 laps. In spite of a safety car period, which caused his advantage to shrink for a short while, the Audi driver crossed the finish line in the end with a clear advantage of nearly ten seconds over Philipp Eng (BMW). “This was an incredible victory again,” said Rast. “The new Audi RS 5 DTM is an outstanding race car.”

Behind Rast, a fierce battle for the other podium positions was raging in Sunday’s race. The head-to-head fight saw his teammate, Jamie Green, bump Sheldon van der Linde from third position on the last lap. “This is my first DTM podium in more than a year,” said the Briton. “From ninth on the grid, that was a very pleasant surprise. It was a superb race that was really good fun.”

Green used the safety car period for a second tire change. On fresh tires, the Audi driver battled his way forward in an entertaining final stage from eleventh to third place, with Mike Rockenfeller from Audi Sport Team Phoenix in tow. Rockenfeller had changed tires late and was able to leverage his tire advantage on the final laps as well. Rockenfeller’s teammate, Loïc Duval, was racing with a similar strategy, but dropped out of the points in a tussle after the restart.

For Audi Sport Team Abt Sportsline, Sunday ended in disappointment. Robin Frijns, from fourth on the grid, was battling for a podium finish before being forced to retire after a collision about halfway through the race. Nico Müller finished Sunday’s race in eighth position.

“Yesterday overtaking at Zolder seemed impossible and today we saw plenty of overtaking maneuvers and fantastic racing,” said Head of Audi Motorsport Dieter Gass. “It was an incredible race with an extremely good result for Audi. My thanks go to the entire squad that untiringly worked again this weekend. Without them, this success would not have been possible.”