René Rast: “The success drives us as a team” 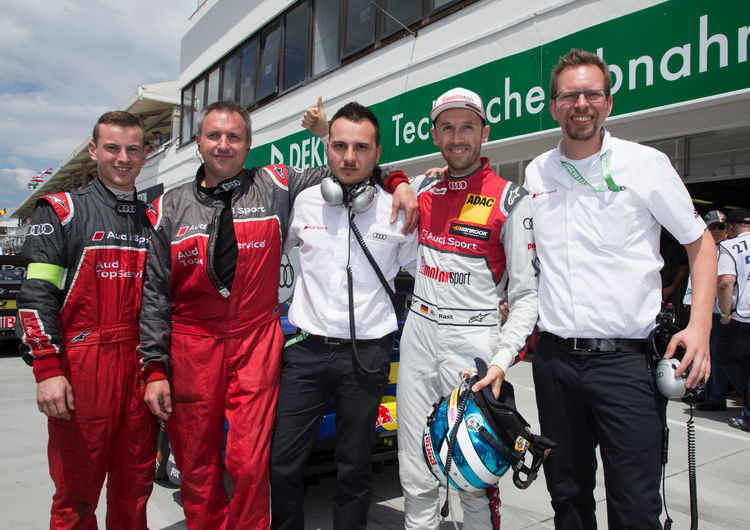 Audi driver René Rast has already achieved some of his self-set targets: his first podium result and two fastest race laps at the Lausitzring; first pole position and first DTM victory in Budapest. Apart from his DNF in the Sunday race at Hockenheim, the rookie has finished in the points on every occasion. The pressure that comes with success, however, is not even an issue for the 30-year-old.

Mr Rast, how does it feel to be the current leader in the drivers’ standings?
René Rast: “It’s obviously a great feeling, no question. I really did not expect it. Even the idea of it was still so far away for me. Then in a TV interview I was told that I was now leading the championship. Meanwhile it has started to sink in more and more, and of course it feels really good.”

Last weekend in Budapest you celebrated your first DTM victory already. Does this spur you on more or do you feel the pressure that comes with this success?
“It drives us more as a team. Whether it’s starting on the first row on the grid in Hockenheim or the podium at the Lausitzring. The more success we have, the more motivated we become. This has given us all yet another boost. In Budapest, I had already driven a few laps for tire testing and therefore knew the track. When I was then close to all of my brand colleagues in the first free practice session, I knew that it could really go well. But I hadn’t even thought about victory by that point.”

Will you change anything about your preparation for this race weekend? Will you now work even more meticulously?
“At the moment, we don’t have any reason to change the way we’ve been doing things. Because so far it has worked out well at all of the race weekends. So as far as I’m concerned it can go on the same.”

Both in qualifying and in the previous races, you are always amongst the drivers with the fastest lap times. The setup seems to be all good – is it now just down to fine tuning?
“Preparing the setup for the upcoming events remains a major challenge. We couldn’t base it on previous successful events, but rather we have to completely specifically prepare for each race. In Budapest, we had tuned the car mainly with a lot of downforce, while the next DTM event at the Norisring will require little downforce. Every circuit requires its own setup. Fortunately, my team is able to be very well prepared before we get to the race track. At the last three race weekends, we as a team have always found a good setup, but this is still never a given.”

What impression have you got from working together with your race engineer Florian Rinkes?
“An especially good impression. We are in some sense both rookies as he didn’t work in this role before this year. However we have already worked really well together. He is doing a superb job and knows an incredible amount about the car. And he always has the right instinct. You can only take your hat off to him for his accomplishments for Team Rosberg at the moment.”

From June 30 to July 2, the DTM will take place at the city-circuit in Nuremberg. What are your expectations for the race?
“It’s difficult to predict. Obviously it would be great to build on the successes that we had in Budapest. But as always we have to wait and see how free practice goes and whether we are so competitive again. In the last few years we have seen how strong Audi have been in Hungary and how it has not been so easy at the Norisring. But I think that we will have a great car again. The motto will definitely be once again to score points. But for that we have to finish the races first.”

Are you also competing in other races before then?
“On Thursday, I head to another GT race entry at Paul Ricard. There in the Blancpain GT Series Endurance Cup, I will compete with WRT and therefore begin my preparation for the 24-hour race in Spa. But come Sunday evening I’ll be fully concentrated on the DTM at the Norisring again.”