René Rast takes yet another DTM podium for Audi

{{ activeItem() }}
Twitter
01/17/20
Our first look on site at the changes made to the Santiago @FIAFormulaE circuit. We caught up with @Daniel_Abt and… https://t.co/0yoJ7IiwzX
01/17/20
Race times and broadcast schedule for tomorrow. The lights go green at 20:04 CET (16:04 local time). More info &gt;&gt;… https://t.co/kgn1mJtrWH
01/17/20
Good morning from Santiago de Chile. Track walk done as we continue to prepare for race day tomorrow. Shakedown at… https://t.co/TC6K8eLL6b
01/16/20
Welcome to warm Santiago de Chile. Temperatures of over 30°C as we get ready for the first @FIAFormulaE race in 202… https://t.co/ZKj6rzvRoM
Audi Sport on Twitter
{{ activeItem() }}
Facebook
01/15/20
Full speed to the first ABB Formula E race of 2020: the Santiago E-Prix on Saturday, February 18. >> audi.com/FormulaE #PerformanceIsAnAttitude
01/14/20
Don‘t miss out as Formula E goes full throttle this season. #PerformanceIsAnAttitude
01/13/20
Kicking off 2020 for Audi Sport customer racing with podiums in Dubai: TCR class victory for the Audi RS 3 LMS and two overall podiums for the Audi R8 LMS. Well done to our customers in the rain-shortened Dubai 24 Hours. >> audi.com/GT3 >> audi.com/TCR #PerformanceIsAnAttitude
01/09/20
After our best DTM season to date, we're looking forward to the second chapter of the turbo era when the lights turn green for the 2020 season at Circuit Zolder in April. >> audi.com/DTM #PerformanceIsAnAttitude
Audi Sport on Facebook 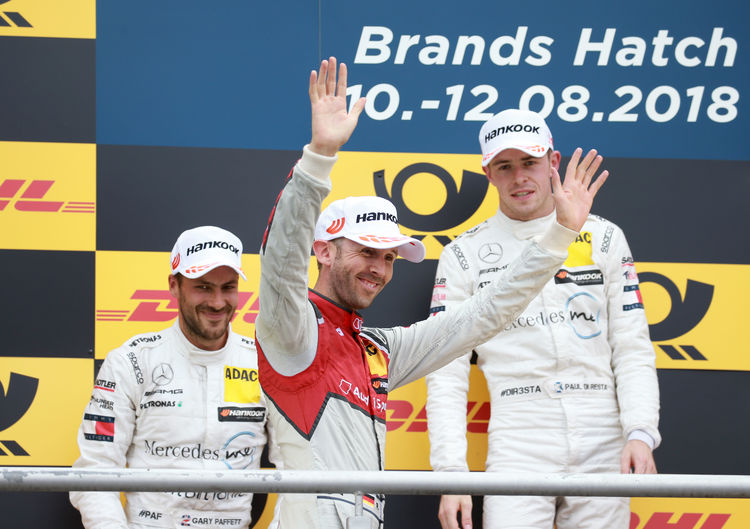 Fourth on Saturday, third on Sunday: defending Champion René Rast from Audi Sport Team Rosberg scored 28 points as the DTM returned to England and, in doing so, took yet another podium in the popular touring car race series.

The reigning DTM Champion kept pulses racing all the way to the last lap in Sunday’s race around the challenging Brands Hatch Grand Prix track. Starting from fourth place, Rast was pushed aside twice in the opening stages by Pascal Wehrlein in a Mercedes-Benz. Thanks to a faster pit stop, Rast overtook the former Formula One driver before hunting down the leading two Mercedes-Benz driven by Paul di Resta and Gary Paffett, who he caught up with just before the end. At the flag, the German was only deprived of his second victory of the season by 1.376 seconds.

“Just two laps more and Gary (Paffett) would have had no more DRS,” said Rast. “Then I might have been able to overtake him. But even so I’m still very pleased. It was a fantastic weekend for us with fourth place yesterday and another podium today. However, it’s not just the result that makes me happy, but also the way in which we achieved this. We were very competitive, also compared to Mercedes-Benz. This makes me confident for the rest of the season.”

With Mike Rockenfeller (Audi Sport Team Phoenix) in sixth place and Nico Müller (Audi Sport Team Abt Sportsline) in tenth place, two further Audi RS 5 DTM finished in the points. By contrast, the other three Audi drivers were unlucky. After qualifying strongly in sixth place, Robin Frijns was involved in a collision early on the first lap. From the tail end of the pack, the Dutchman raced through the field in his damaged car to twelfth place. Loïc Duval lost possible points due to a rear-left puncture six laps from the end. Jamie Green had fourth place within his grasp before he was given a drive-through penalty just before the end of the race after forcing another competitor wide.

“We are delighted to go home from Brands Hatch with a podium finish,” said Head of Audi Motorsport Dieter Gass. “It was fantastic to be here with the DTM and to race on the long Grand Prix circuit for the first time. After the early pit stop, it was a very long race for René (Rast), however he did a good job saving his tires. Right at end he was even able to attack the two leading Mercedes-Benz. But even with the help of DRS, we know just how difficult it is to overtake at Brands Hatch. Mike (Rockenfeller) and Jamie (Green) also raced strongly. It’s a shame that Jamie lost the points that he deserved in his home race because of a drive-through penalty.”

After the trip to England, the DTM action continues in 14 days in Italian Misano. The first two night races in DTM history will be held on the race track on the Adriatic coast close to Rimini on August 25-26.