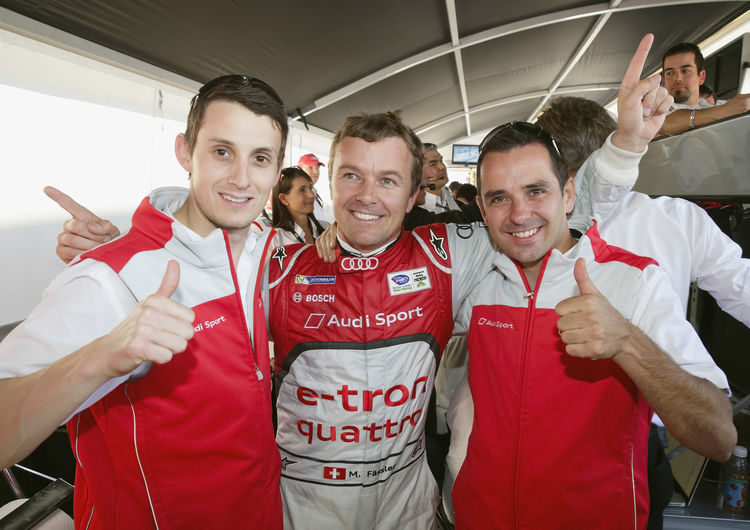 The Audi R18 e-tron quattro is causing a sensation on its first racing commitment in the United States. In qualifying for the 12-hour race at Sebring (Florida) both hybrid race cars from Audi Sport Team Joest clearly beat the previous qualifying track record.

In the cockpits of the two Audi R18 e-tron quattro cars, Marcel Fässler (CH) and Allan McNish (GB) fought a close duel for the top spot on the grid in the 15-minute qualifying session on Friday afternoon. In the end, the Swiss with a razor-thin advantage of 0.009 seconds prevailed against his Scottish team-mate. The two-time Le Mans winner and current World Endurance Champion took his first pole position in a Le Mans prototype plus his first one as an Audi factory driver.

Fässler on his fourth flying lap managed setting a time of 1m 43.886s. The Audi racer thus beat the fastest time of the conventionally powered Audi R18 TDI from last year by almost two seconds – as well as the previous qualifying track record set by Marco Werner in 2007 in the Audi R10 TDI (1m 44.974s).

At the – provisionally – last last run of an LMP1 sports car at Sebring, Fässler is sharing the cockpit of a 2012-specification R18 with Oliver Jarvis (GB) and Benoît Tréluyer (F). Lucas di Grassi (BR), Tom Kristensen (DK) and Allan McNish (GB) are driving the 2013-specification Audi R18 e-tron quattro that is celebrating its racing debut in Florida and completed initial test laps in its most current configuration on Monday. An accident by Allan McNish in Thursday morning’s free practice cost valuable track time.

For Audi, this marks the tenth pole position in total at 14 events at Sebring. The brand with the four rings has so far won the U.S. endurance classic an equal number of times. In turn 1, Audi is exhibiting four of its Sebring-winning cars this weekend. In addition to the Audi factory drivers who are active at Sebring, four Sebring winners – Frank Biela (D), Dindo Capello (I), Emanuele Pirro (I) and Marco Werner (D) – are on location.

Dr. Wolfgang Ullrich (Head of Audi Motorsport): “Qualifying was a thrilling event because both of our cars were always very close together. The result is a very good starting base for the race. The race though will show us though that the gaps won’t remain as comfortable. The two positions on the front row are a nice reward for the commitment of the whole squad and perfect motivation as well.”

Ralf Jüttner (Technical Director Audi Sport Team Joest): “Qualifying yet again showed what we’ve been seeing here the whole time. Whenever our two cars are out on track together we’re experiencing a fight in the range of hundredths. That’s nice and promises a thrilling race. Still, we’ve got to watch out for the competition because the situation can become a lot closer on Saturday. We’ll need a few hours before knowing how the relative power in the field will pan out then.”

Marcel Fässler (Audi R18 e-tron quattro #1): “It was a really nice feeling to climb out of the car and see my name at the very top of the time monitor. It was another incredibly close duel between Allan (McNish) and me – this time I came out on top in the end. Aside from a thrilling qualifying session, this is obviously a perfect starting base for the race on Saturday.”

Oliver Jarvis (Audi R18 e-tron quattro #1): “I love motorsport in the USA. I already had a great debut at Daytona and with the pole position of our car here I’m experiencing the next highlight right away. But we’ve still got a lot of work to do. There’s so much that can happen in a 12-hour race – not only with respect to our sister car but also regarding the rest of the competition.”

Benoît Tréluyer (Audi R18 e-tron quattro #1): “Simply cool! I like this track and the unique atmosphere here at Sebring. Marcel (Fässler), Oliver (Jarvis) and I simply feel comfortable as a team of three – in the car just like in the pits and off the track. It was fun to watch Marcel in qualifying. He gave everything and then got out of the car with a big grin.”

Lucas di Grassi (Audi R18 e-tron quattro #2): “This is my first ever race weekend in the USA. The whole week has been a great experience and now I’m looking forward to the race. For the time being, this will be Audi’s last run here at Sebring and that makes it a very special event. I’ll be giving my best and am happy to have two team-mates in Allan (McNish) and Tom (Kristensen) who have already made history with Audi.”

Tom Kristensen (Audi R18 e-tron quattro #2): “I’ve got to admit that I feel a bit of sadness thinking about all the years and the races we experienced here at Sebring. This weekend we’ll be saying goodbye for the moment. There’s a great race ahead of us with strong competition, above all of course our sister car. We’re lacking a bit of driving time from Thursday plus I only arrived at Sebring at the last moment – still, I’m confident that we’ve got a good chance of winning here on Audi’s last run.”

Allan McNish (Audi R18 e-tron quattro #2): “What a qualifying session! Although we expected it to turn into a duel between the two Audi cars we wouldn’t have thought that the outcome would be this close. The conditions on the track have continuously improved since yesterday so that I was able to really push.”

The starting grid at Sebring