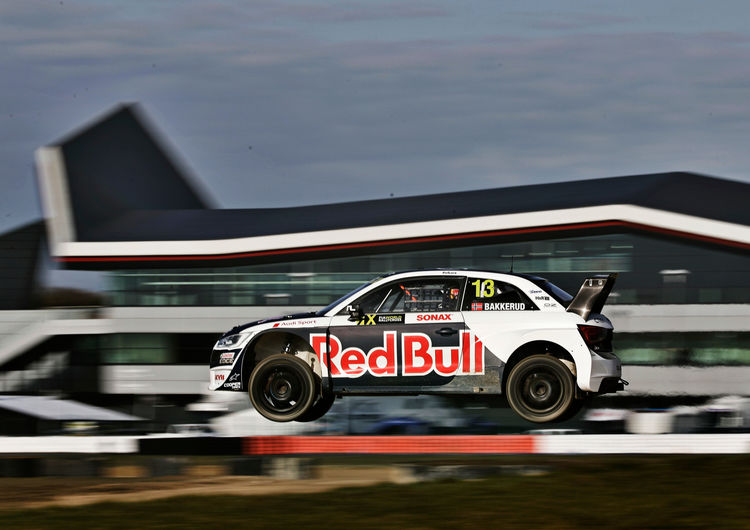 Premiere for EKS Audi Sport: Silverstone in England is the venue for a round of the FIA World Rallycross Championship (World RX) for the first time this weekend (May 25–27), where the most difficult jump of the year awaits the two Audi drivers Andreas Bakkerud and Mattias Ekström.

Silverstone is regarded as “Home of British Motor Racing” since 1947 and is one of the world’s most traditional race tracks. A new 0.972 kilometer track comprised of 40 percent tarmac and 60 percent gravel was created for the World Rallycross Championship between the Formula 1 paddock and the famous Hangar Straight. “The corners are not so exciting,” judges Mattias Ekström. “But the artificial jump could decide the outcome of a race. It is the biggest and most difficult of the year.” Normally jumps are taken at full throttle in rallycross. In this case the driver must regulate the speed well so as not to soar too high. “It’s extremely difficult to adjust the speed correctly for the jump,” says the 2016 World Champion.

Ekström set the fastest time at the wheel of the powerful 580 hp Audi S1 EKS RX quattro during the official pre-season tests at Silverstone. Teammate Andreas Bakkerud also performed well on the new track at the test. “I’ve already driven there in a national rallycross race as well and have a good feeling,” says the Norwegian. “After having narrowly missed the podium on several occasions at the recent events it’s high time to spray champagne again. It’s crystal clear that we aim to strike back in Silverstone!”

The British World Rallycross Championship round is a part of the newly created motorsport festival “Speedmachine”. The event provides spectators pure racing for three days and many more attractions: among them concerts, drift shows, demonstration laps, exhibitions of historic race cars, an E-Sport event and a street food festival.

Highlight on Sunday are the two semi-finals and the final for the Supercars from 15:00 local time (16:00 CEST). The accompanying livestream starts on Sunday at 15:00 (CEST) on www.fiaworldrallycross.com. ProSieben Fun broadcasts live in Germany.