Quotes after the race in Shanghai 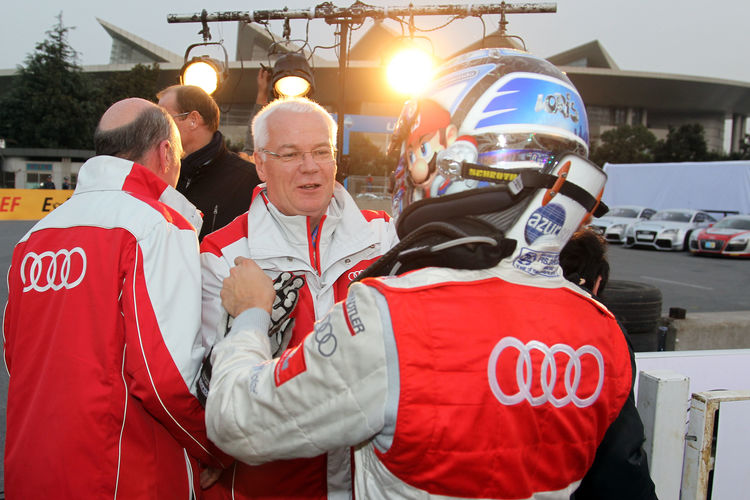 Just one day after his serious accident in qualifying Timo Scheider mounted the podium at the DTM’s world finale in Shanghai (China) as the third-placed driver. Quotes from the Audi camp after the race.

Dr. Wolfgang Ullrich (Head of Audi Motorsport)
“The team did a truly fantastic job and completely repaired Timo Scheider’s car that had been very heavily damaged in the qualifying accident from scratch again overnight. Everyone was helping each other in this effort. It’s a remarkable feat to drive such a strong race and to clinch third place in this car. By taking third, fourth and fifth place we’ve achieved a good result. Obviously a little more would have been nicer but that was unfortunately not possible due to our grid positions. I think that despite all the initial difficulties this has been a worthy and interesting DTM finale. Congratulations to Paul Di Resta on winning the title. He was very strong this year.”

Timo Scheider (GW:plus/Top Service Audi A4 DTM #1), 3rd place
“Standing on the podium after the turbulent qualifying and the scrap I left behind is almost a bit unexpected. The guys did an incredible job. Everyone from Audi and every Abt mechanic put all their energy into my car last night. It wasn’t just my mechanics but also those of the other drivers. This is what makes it all so special, to feel how much of a team and family spirit we’ve got. It makes me feel proud to be a part of that. I’m very happy that by taking third place today I’m able to pay back a little of it. It’s clear, too, that the guys are tired and will not be celebrating this third place. But to me it was important to clinch this result and to start the winter break this way. It’s nice to know that I’m backed by such an outstanding team.”

Martin Tomczyk (Red Bull Cola Audi A4 DTM #6), 4th place
“Now we’ve experienced a nice conclusion in Shanghai after all, at which there were fortunately no incidents. My race was okay. I’m pretty happy to have advanced from eighth to fourth place. I had some very tough battles and managed to stand my ground in all of them. It was fun and the pace was good. For me this ends a season that was very much fair to middling on a positive note.”

Miguel Molina (Audi Bank A4 DTM #18), 5th place
“This was a nice as well as a difficult race. I enjoyed it very much. Our pace was fantastic. I was able to make up two places although I was blocked by other drivers who disregarded the blue flags. I’m pleased with my race and with my season as the best rookie. Next year will even be better.”

Markus Winkelhock (Playboy/GW:plus Audi A4 DTM #14), 7th place
“I’m not happy because I could have easily finished in fourth place. The pace was there – the car had it and so did I. I felt comfortable on the track but our strategy was completely off the mark. Twice I went out behind another car and lost a lot of time. In the end I was running behind Jamie Green and lost so much time that I dropped from fourth place to seventh. Considering this, the fact that I scored points for the second consecutive time is not a lot of consolation.”

Mattias Ekström (Red Bull Audi A4 DTM #5), 9th place
“The race was a bit boring. Unfortunately, balance was not as good as it had been in the warm-up session. That was frustrating because I had to fight a lot. In the end I finished in the same place I’d started from. But more would definitely have been possible.”

Mike Rockenfeller (S line Audi A4 DTM #10), 12th place
“This was absolutely not our weekend. Still, I’m very pleased with my year with Team Phoenix. It was great. We had our highlights. Seventh place in the championship isn’t bad. But, nonetheless, our result in Shanghai isn’t satisfactory. We tried everything. In the end I even tried to pass Susie (Stoddart). But the track was so bumpy and one of the wheels immediately locked. I brushed her and we spun. I’m sorry about that, also because it caused the race having to be stopped.”

Katherine Legge (Glamour Audi A4 DTM #15), 14th place
“The race could have turned into a good one for us today but for various reasons things weren’t going in our favor. That’s disappointing. The good thing is that we clearly increased our pace in the season’s final two races. I’ll try and continue this performance. China was definitively a worthwhile experience. It was totally different than on any of the other tracks. It’s nice that we ran here.”

Oliver Jarvis (Tabac Original Audi A4 DTM #2), 17th place
“We really had a good pace but the race was frustrating. Unfortunately we always missed the mark with respect to our positions in traffic. I had the feeling that Bruno Spengler should have received blue flags because he slowed us for several laps. In the end I ran over a piece of bodywork that was on the track. That’s why I had to come in for an additional pit stop. The pace was good today but unfortunately it didn’t produce a result in the points.”

Hans-Jürgen Abt (Team Director Audi Sport Team Abt Sportsline)
“We showed that the team sticks together tremendously. After yesterday’s accident we made the best of the situation. ‘Well done,’ everyone did a flawless job, the strategy was superb. We brought all the cars forward, almost every driver improved. That’s a respectable showing. Unfortunately the race being stopped put us out of contention for victory. The last eight minutes would have turned into some real nail-biters. China is a very important market. If everyone works together to make things even better, we’ll be very happy to come back here.”

Ernst Moser (Team Director Audi Sport Team Phoenix)
“When we saw that we were stuck in traffic we called in Mike Rockenfeller early for both of his stops. So we chose a different strategy. We were continuously stuck behind Susie (Stoddart), which meant we simply couldn’t influence the race. We wanted to achieve the best possible result but only finished twelfth, which is a shame. Now the season is over. I’d like to express huge praise to my squad which showed a tremendous commitment through to the final race. They gave everything even in difficult conditions.”

Arno Zensen (Team Director Audi Sport Team Rosberg)
“We saw a good finale. Thank God the race ended without any accidents except for a little encounter at the end. Markus (Winkelhock) was very good throughout the weekend. Today a better result would have been possible. We should have finished at least in fifth place. Unfortunately he hit traffic, we had to change our strategy and Markus again got caught in a pack. A real shame! Katherine (Legge) drove very good lap times. But she, unfortunately, often got stuck in traffic as well. But we’ve seen a positive weekend. Markus scored points for the second consecutive time. He showed that he’s got what it takes!”