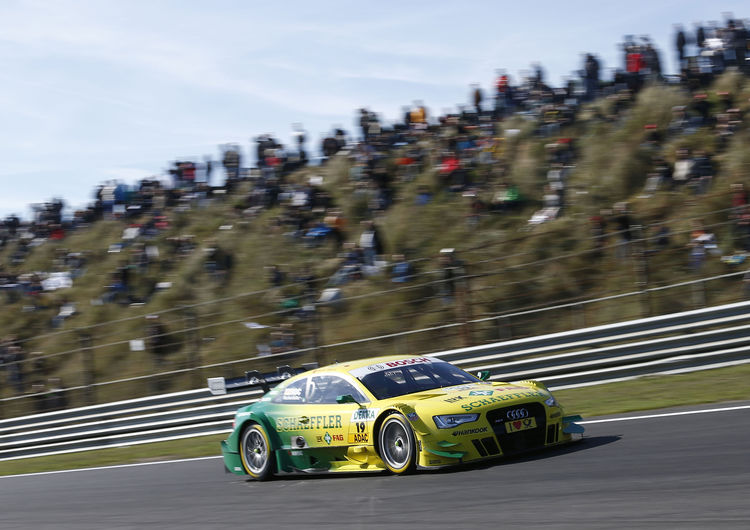 By taking second place, Mike Rockenfeller secured an early title win in the DTM at Zandvoort (the Netherlands). In total, six Audi drivers scored points and thus captured the lead in the manufacturers’ classification for Audi as well. Quotes after the race.

Dr. Wolfgang Ullrich (Head of Audi Motorsport): “Winning a DTM title is always a very special thing. I think Mike (Rockenfeller) will fully realize this only in the next few days or weeks. He’s an absolutely deserving and worthy 2013 DTM Champion – he’s shown this today yet again. Congratulations to him, to Audi Sport Team Phoenix and to everyone at Audi Sport in Ingolstadt and Neckarsulm as well. Following the difficult 2012 season, we decisively improved the RS 5 DTM in winter despite the tight regulatory requirements. The same is true for the R18 e-tron quattro that we won Le Mans with and that we’re just about to win the title in the World Endurance Championship with. Leading both programs to success in parallel was a huge effort for the whole squad. But it was well worth it.”

Dieter Gass (Head of DTM): “A fantastic day for Audi! Before the event, we carefully thought about the situation, prepared everything and ran through various scenarios. But we couldn’t expect to actually be able to wrap up the title today. On Saturday, we saw that BMW was enormously strong here. But we kept calm and, particularly on the option tires, showed a strong performance today, as Mattias (Ekström) demonstrated. We made use of our possibilities and became an early Champion.”

Mike Rockenfeller (Schaeffler Audi RS 5 DTM), 2nd place
Tires: Option/Standard/Standard
“I need a few minutes to myself now in order to realize the success. It was a long race, and it had a bit of spice due to the start. After overtaking Marco Wittmann, I briefly dreamed of victory when I closed the gap to Augusto (Farfus). But I was having difficulties on the standard tire. I was happy that Timo (Scheider) was behind me and covered the rear for me.”

Timo Scheider (AUTO TEST Audi RS 5 DTM), 3rd place
Tires: Standard/Option/Standard
“It’s been a tough season until today. We managed to come back step by step and to draw on the performances we’d been planning on. This worked out today. And it feels particularly good because we were able to support Mike (Rockenfeller) in winning the title. He truly deserves the title. Congratulations to Mike Rockenfeller, Audi and Audi Sport Team Phoenix.”

Adrien Tambay (Audi ultra RS 5 DTM), 6th place
Tires: Standard/Option/Standard
“I’m pleased. We scored some good points. Moving forward from tenth to sixth place was very good. I had a great race with a good pace and nice overtaking maneuvers. My Audi was running perfectly the whole weekend; ‘thank you’ for that to my team. I could have finished in fourth place. Unfortunately, the safety car thwarted my plans. ‘Rocky’ became Champion, our aim has been achieved. We’re all happy today.”

Filipe Albuquerque (Audi Financial Services RS 5 DTM), 8th place
Tires: Option/Standard/Standard
“That was a hard race for me. Initially, on the option tires, I managed a good start but subsequently got stuck behind Marco Wittmann. The strategy was difficult and, unfortunately, I lost a few positions. But I did everything I could and finished in the points. That’s a good result for me and for Audi Sport Team Rosberg. Naturally, we’re aiming to score points again in the finale at Hockenheim.”

Miguel Molina (Audi RS 5 DTM), 10th place
Tires: Option/Standard/Standard
“It was a good race. On the option tires I had a good pace but wasn’t quite as fast anymore on the first set of standard tires. On the final laps, I had a couple of good battles with Martin Tomczyk and Gary Paffett. I finished in the points here for the third time; I’m pleased about that. But more important is the fact that Audi, Audi Sport Team Phoenix and ‘Rocky’ (Mike Rockenfeller) have won the Championship.”

Jamie Green (Red Bull Audi RS 5 DTM), 13th place
Tires: Standard/Standard/Option
“That was an interesting race. I had a good start and a great first lap, and was able to make up a few places. We stayed out for a very long time on the first set of tires, a few drivers caught up and I had to let them pass. The same thing happened to me during my second stint on standard tires. On option tires, I was able to make up ground in the end. I tried to overtake Dirk Werner but he moved to the left and right. Unfortunately, we touched, he flew off track and I went into a semi-spin as well. That caused the safety car period. Afterward, I was no longer able to catch up and finished in 13th place. Without this incident I could have probably scored points.”

Hans-Jürgen Abt (Team Director Audi Sport Team Abt Sportsline): “Congratulations to Audi, Audi Sport Team Phoenix and Mike Rockenfeller on winning the Championship. But with Timo Scheider’s third and Mattias Ekström’s fourth place we delivered a superb performance today as well. Our rookie, Adrien Tambay, did a great job too. We also provided strong support to ‘Rocky’ to ensure that he stands where he’s standing today. Everything simply fit together and we’re going to have a great party today.”

Ernst Moser (Team Director Audi Sport Team Phoenix): “We achieved our aim. By taking second place we won the Championship early. ‘Many thanks’ to Audi and to the other two teams. ‘Rocky’ (Mike Rockenfeller) was in superb form and did everything right. He caused quite a bit of suspense today. Now we’re Champions and now we’re going to celebrate.”

Arno Zensen (Team Director Audi Sport Team Rosberg): “Congratulations to Audi, Mike Rockenfeller and Audi Sport Team Phoenix. A sensational race, it’s nice that he won the Championship here, so now we can travel to Hockenheim relaxed. Our race had highs and lows. It’s a shame that Filipe (Albuquerque) had Joey Hand slip by him again in the early phase, which meant his race was lost. But he bravely battled his way to eighth place. Edo (Mortara) wasn’t able to keep the pace on option tires in the beginning. Afterward, he was fast but by that time it was too late.”