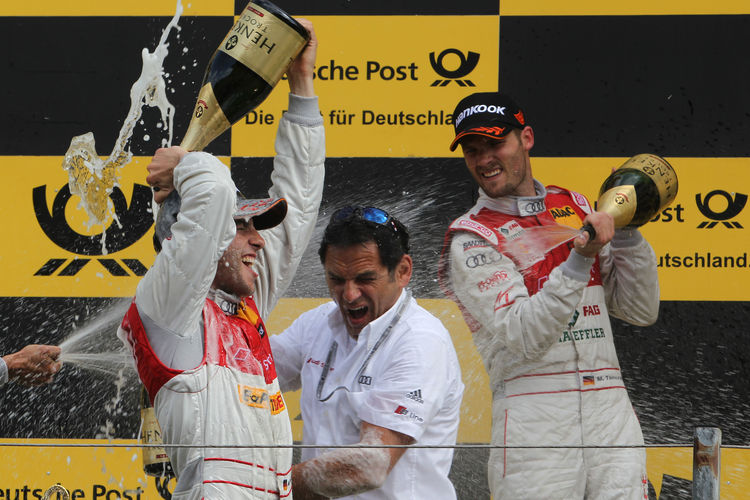 The first DTM victory for Mike Rockenfeller, Martin Tomczyk in the 2008-specification A4 DTM on the podium as well, and a total of five Audi racers in the points. Reactions after the DTM race at Zandvoort that went extremely well for Audi.

Dr. Wolfgang Ullrich (Head of Audi Motorsport): “Our cars today were simply exactly as fast again as they’d been before qualifying. We put that on track with a very aggressive strategy. Mike (Rockenfeller) drove a perfect race. Martin (Tomczyk) showed his potential. He was quick, aggressive and delivered a fair battle in every respect nonetheless. In addition, we brought Mattias (Ekström) into the points from grid position 16. ‘Edo’ Mortara scored points as early as at his second DTM race. Timo (Scheider) wasn’t quite as happy with his car and his fifth place tends to reflect his efforts to ‘contain the damage.’ But on the whole it was a fantastic showing by Audi.”

Mike Rockenfeller (E-POSTBRIEF Audi A4 DTM #9), position 1
“The race was simply perfect. After the warm-up I didn’t even expect this. But my engineer and my mechanics turned exactly the right screws for the race. The car was exactly the way I wanted it to be – simply fantastic. The foundation was laid by passing a Mercedes right at the start. Plus the early first stop: It gave me enough room to Bruno (Spengler). Afterward, I was able to control the race. I almost feel like a big load has been taken off my chest. It took a long time before I was finally able to sit in an A-car. After a good qualifying session but a poor race at Hockenheim this was exactly the right answer. The ten points are important. And then we’ll try and be even stronger from the outset in Austria.”

Martin Tomczyk (Schaeffler Audi A4 DTM #14), position 3
“After yesterday’s qualifying the direction was forward. We saw at the long runs that my car is very quick, so the main thing was to have a good strategy. And we did. Unfortunately, I lost some time at the first pit stop because the situation with Oliver (Jarvis) was very tight and I had to wait before I was able to drive off. Fortunately, I managed to make up the time on track and drive very fast and consistent lap times. The timing of the second pit stop was perfect. Afterward I was quick enough to close the gap to Jamie (Green) and to overtake him. I also moved up to Bruno (Spengler). Unfortunately, the race was over a bit too soon ... but with position three for me and with ‘Rocky’s’ win it could hardly have gone better!”

Timo Scheider (AUTO TEST Audi A4 DTM #4), position 5
”At first we were quick for six to seven laps after each stop. But then we had the same problem again as in the warm-up: The rear suspension dropped a bit, which clearly impaired the car’s balance. I haven’t had to fight so hard to finish a race in a long time. Below the line we’ve scored a few points. They’re important for the championship. But: That’s obviously not satisfactory.”

Edoardo Mortara (Playboy Audi A4 DTM #19), position 6
“It was a tough race because I’m still lacking experience to some extent. I had a good start but Schumacher came very close to me in turn one. I was very cautious on the first lap, trying to avoid touching other cars and damaging my own car. After an early first pit stop I was able to keep the pace on old tires in the second stint as well. The team had a great strategy and made a fast pit stop. We’re happy with this fantastic result.”

Mattias Ekström (Red Bull Audi A4 DTM #8), position 8
“An interesting race. Our car was faster today than it was yesterday. The grid position wasn’t good. But scoring one point is definitely better than leaving empty-handed. I certainly had to work pretty hard for this though.”

Oliver Jarvis (Audi Sport performance cars A4 DTM #5), position 10
“We managed to stay clear of all trouble and drove our own race. Unfortunately, I didn’t have a good start and it was difficult for me to make up positions. In the race we were quick – and that was clearly an improvement over qualifying.”

Miguel Molina (Red Bull Audi A4 DTM #22), place 14
“I had a good start but lost a few positions on lap one. My rhythm was good and so was the car’s balance. But the others were just as quick and we didn’t find an opportunity to overtake. My hopes are pinned on the next race.”

Rahel Frey (Glamour Audi A4 DTM #15), position 17
“I paid dearly in the race; it was my first time at Zandvoort. Once I got off the line and unfortunately hit even more sand when I started braking and then slid into the wall. That way I destroyed my own race early on. I tried to finish the race but the car was very hard to drive. Because I damaged my splitter, my A4 behaved very nervously. As I said – I paid dearly.”

Filipe Albuquerque (TV Movie Audi A4 DTM #18), retirement
“My start was okay. But in the first turn I made a braking mistake. Both wheels locked, I left the track and drove through the gravel trap otherwise I’d have hit Miguel (Molina). After that it was okay. But the engine temperature went up due to the defective radiator and I had to stop to keep from damaging the engine.”

Hans-Jürgen Abt (Team Director Audi Sport Team Abt Sportsline): “’Well done’ to the whole team. It was very important for us to clinch a success today. We learned from the problems in qualifying and had a superb strategy. The whole team was right on the mark. The three quickest pit stops in the race speak for themselves. You need such a motivation boost once in a while. This strengthens us for the future and makes us hopeful.”

Ernst Moser (Team Director Audi Sport Team Phoenix): “That was a race exactly to our liking. Congratulations to Martin (Tomczyk), the team and to Audi. We managed to move forward quite a bit with our strategy. We opted for a long middle stint. In the end we were the quickest on the track on new tires. Martin had the chance for fantastic attacks and overtook a Mercedes. As expected, Rahel (Frey) is learning from race to race. She had an excursion and lost a lot of time. When she was running alone she set good lap times. She improves on every lap she drives and is gathering experience. We’re building on that.”

Arno Zensen (Team Director Audi Sport Team Rosberg): ”That was surely a fantastic race and a great advertisement for the DTM! I’m incredibly happy for Edoardo Mortara, who finished in the points. The team did an outstanding job. The stops went well, the strategy was superb. My thanks go to everyone. I’m happy! The only drop of bitterness was Filipe (Albuquerque) flying off the track right in turn one. He damaged the radiator in the incident and was forced to retire. We’ve seen that we’re in contention. We need to continue this way.”