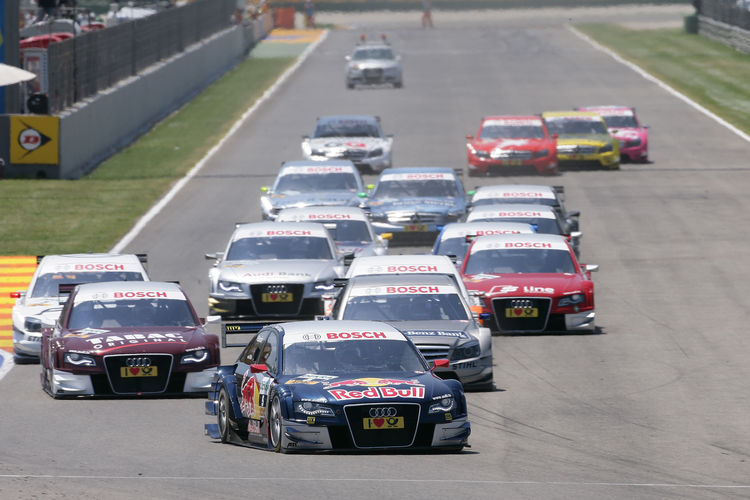 The joy over Audi’s one-two victory at Valencia was marred afterwards: Martin Tomczyk lost his well-deserved second place because one of the twelve tires used in the race on his Audi A4 DTM was accidentally taken from a wrong lot. Quotes after the race.

Dr. Wolfgang Ullrich (Head of Audi Motorsport)
“Principally, it was a great race for Audi – and we could have been very pleased with the original result. Our cars were very fast and our drivers strong. Overall, it was a strong team performance. ‘Eki,’ Oliver (Jarvis) and Martin (Tomczyk) determined the race. It could have been a 1-2-3 exploit for Audi. But the problem with the lack of fuel pressure with Oliver’s car, which we still need to analyze, and the mishap in Martin’s team prevented our possible one-two-three win. The team had mixed up a barcode and so a tire from the wrong lot was put on his car for the last stint. This did not give Martin any advantage but the rules prescribe a disqualification in this case. We’ve got to live with this now and make sure that something like this will never happen again, because we lost valuable points and gave points to our rivals. There’s no room for this in the DTM.”

Mattias Ekström (Red Bull Audi A4 DTM), place 1
“This is a rare moment in my life because here I managed the triple of a pole position, fastest race lap and victory. There was a lot of pressure on me. The car was good straight from the start. That’s why I had to find a good compromise between taking it easy on the tires and speed. I’m very pleased about having won again after a longer period of time. Now I’m just happy, and until tomorrow you’ll only see me with a big grin on my face.”

Alexandre Prémat (TV Movie Audi A4 DTM), place 3
“From the beginning to the end it was a fantastic race. The start was superb. Then a tough battle with Gary Paffett ensued. After just one lap I was running in sixth place. Timo Scheider and Martin Tomczyk were incredibly quick. During my second stint I asked my team whether I could pit a little earlier than the others. That worked out very well and we overtook three cars in the process. I’m very pleased with the team, which was excellent throughout the weekend. Scoring so many points is particularly nice after the weekend at Hockenheim.”

Timo Scheider (GW:plus/Top Service Audi A4 DTM), place 4
“My start was good. In the second turn I decided to run on the outside – that was the right thing to do. Then I was driving at a very high pace during the first part of the race. Both pit stops were very good. In the middle part of the race we had a problem with the inflation pressure of the rear tires. It was a tenth too low, and that’s why we couldn’t attack. The last stint with modified inflation pressure was very good again. I can be satisfied with having advanced so much from tenth place.”

Mike Rockenfeller (S line Audi A4 DTM), place 6
“My start was good and I gained one place. Then I had some room in front and behind. But I had to fight, especially after seven to eight laps on each stint. During the first stop we lost a little time due to a problem with the front left wheel nut. Maybe that caused us to lose one or two positions. But I’ve got to honestly say that I wasn’t able to adjust to the car so well today. Alex (Prémat) obviously was able to handle the same set-up better than I. But I’m pleased to have clinched points.”

Miguel Molina (Audi Bank A4 DTM), place 8
“I guess I was a little too conservative on the first lap. It’s difficult to find a rhythm behind the other cars. We wanted to advance a few places with our pit stop strategy. Unfortunately, I made a mistake at my second pit stop and drove a little too far. That’s why I stayed on the same position in the race and couldn’t move forward any more. Toward the end there was a battle with Gary Paffett. First, I overtook him. On the last lap, he attacked me, put a bit of pressure on me and then overtook me again.”

Oliver Jarvis (Tabac Original Audi A4 DTM #2), place 14 / retirement (fuel pressure)
“My first stint was very good. Unfortunately, I wasn’t able to get past Bruno Spengler. So I stayed behind him the whole time. I kept watching my tires. Unfortunately, we had a problem after the second stop when the fuel pressure was gone all of a sudden. I don’t know the cause exactly yet. That meant the end of my race. It was too bad because things were going really well up to that point in time. Now, we’ve lost many points again today.”

Markus Winkelhock (Playboy/GW:plus Audi A4 DTM), place 16 / retirement (left rear suspension)
“My start was good but I couldn’t find a way through the pack and had to lift. In turn two (Jamie) Green hit me in the side and I lost two positions. Two turns later I re-captured both positions after a battle. That meant I was running in eleventh place. The car was very good, which I hadn’t expected yet after the warm-up. My pace was quite okay. Unfortunately, my left rear suspension broke after the uphill chicane and I was forced to retire.”

Martin Tomczyk (Red Bull Cola Audi A4 DTM #6), excluded
“The strategy was outstanding, the car was running like a charm and I was able to drive one fast lap after the other. After the second pit stop I got out behind ‘Eki’ and I even had some room behind me. I didn’t think that I’d be able to advance to second after starting from position nine. That makes the disqualification even more frustrating.”

Hans-Jürgen Abt (Team Director Audi Sport Team Abt Sportsline)
“’Well done’ to Mattias Ekström: after a long barren spell he won again. That’s incredibly reassuring for him. Everyone saw that we’re back again. That was the reward for all the hard work in the past few weeks. My thanks go to the whole team. The other drivers, too, drove great races – Oliver (Jarvis), ‘Magic Molina,’ Timo (Scheider) and Martin (Tomczyk) in particular. That he lost second place due to a small mistake with serious consequences is a bitter pill. Something like this mustn’t happen. I feel incredibly sorry for Oliver as well.”

Ernst Moser (Team Director Audi Sport Team Phoenix)
“I’m very pleased that Team Phoenix finished in the points with both cars. Alex (Prémat) delivered a superb fight. His car was great. The tires were absolutely no problem for him either. ‘Rocky’ was struggling a bit with balance. Despite the car being somewhat difficult to drive he did a great job. You can only be happy with such performances.”

Arno Zensen (Team Director Audi Sport Team Rosberg)
“Unfortunately, Sunday didn’t go so well for us. For health reasons, we had to compete without Katherine (Legge). That was really a shame. In Markus’ (Winkelhock) case we unfortunately did a poor job of qualifying. His pace in the race was okay in any event. He drove a good race. Unfortunately, he was forced to retire after one of the suspensions broke.”