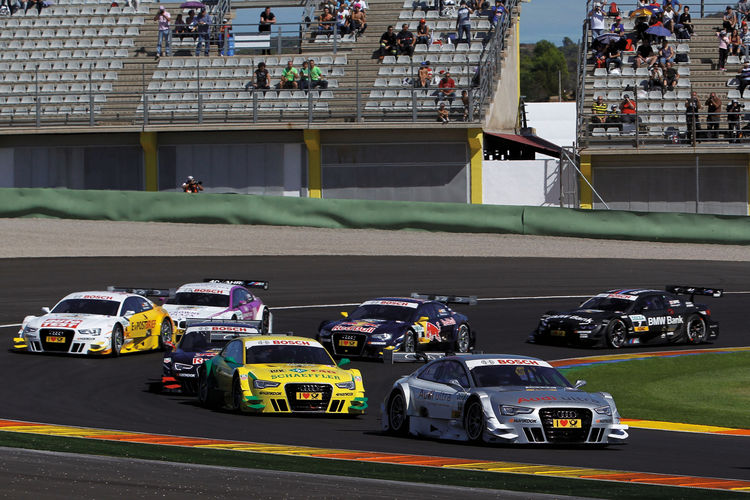 Adrien Tambay clinched his first podium in the DTM at Valencia, Rahel Frey her first points and Audi the lead in the manufacturers’ championship. Quotes after the race.

Dr. Wolfgang Ullrich (Head of Audi Motorsport): “We’ve achieved one of our two main aims and that was to clinch the lead in the manufacturers’ championship. We had a superb team performance today. We weren’t able to win the race but secured the subsequent positions right from the start. It was a shame that three vehicles retired due to technical defects. I’m pleased to see that Adrien Tambay advanced all the way to second place in his first season – and not to be forgotten by any means is the strong performance by Rahel Frey.”

Adrien Tambay (Audi ultra A5 DTM), 2nd place
“It was a fantastic race. In the beginning, it was hard; I had a bad start. Then I was quicker than Filipe (Albuquerque) but it was difficult to overtake him on the track. The guys did a great job at the pit stop. I want to thank everyone at Abt and Audi. In the second stint, I exerted a lot of pressure. Afterwards, I had to stay really focused through to the end. I’m very happy to be on podium for the first time.”

Mattias Ekström (Red Bull Audi A5 DTM), 3rd place
“I had a very good start and managed to even overtake two cars that were running wide in turn two. I had the feeling that I was faster than Filipe (Albuquerque) and ‘Rocky’ in front of me. My team managed a fantastic first stop and I was able to pass ‘Rocky.’ In the second stint, I was driving faster than Filipe in front of me. Then we stopped one lap in front of him and also managed to pass him. My car had perfect balance, the stops were perfect and so was the strategy. Because ‘Edo’ (Mortara) retired I even managed the leap onto the podium. This trophy goes to my team.”

Filipe Albuquerque (TV Movie Audi A5 DTM), 4th place
“This was a really rough race for me. The start was good but in the early phase I was struggling with insufficient tire pressure and later there was simply a lack of speed too. The best thing today was the points for fourth place.”

Mike Rockenfeller (Schaeffler Audi A5 DTM), 5th place
“My start was less than perfect. Although I didn’t lose any positions I almost stalled the engine because there was a surprising amount of grip on track. Unfortunately, our strategy today wasn’t perfect; that’s why we finished in fifth place in the end. That’s a shame because a podium would have been possible.”

Rahel Frey (E-POSTBRIEF Audi A5 DTM), 7th place
“I’m totally pleased. I advanced from position 15 to seventh place, which is something I hadn’t expected myself. I gave everything; it was a very fierce battle. And today I scored my first DTM points. I’ve always received fantastic support from Audi and the team. Today I managed to convert this support, for which I’m very thankful, into a result – and that’s worth a lot to me.”

Edoardo Mortara (Playboy Audi A5 DTM), 16th place/retirement
“A great disapppointment for me. My race was good but I was stopped by the technology. Augusto Farfus was a bit quicker than I in the first stint and our first stop wasn’t perfect either, but then I closed the gap to him. In the first sector I was quicker, in the second one we were equal, and only in the third one he was a little faster. Unfortunately, I wasn’t able to finish the duel, which is a real shame.”

Timo Scheider (AUTO TEST Audi A5 DTM), retirement
“The starting phase was very turbulent with a few contacts, but I managed to get through pretty well. Afterward, our speed was good and we had a decent pit stop. Our strategy with our long stint was good. Unfortunately, I had some vibrations toward the end and ultimately lost propulsion completely. 17 laps before the end of the race I retired. That’s a shame because I could have scored important points for myself and for the manufacturers’ championship.”

Miguel Molina (Red Bull Audi A5 DTM), retirement
“I had a good start, managed to overtake two drivers and was part of the Audi pack in the first stint. Later into the race, I had a problem with the brakes and was forced to retire. The positive part was that the performance of the Audi cars was strong. This isn’t my best year in the DTM. But I’m optimistic for the season finale at Hockenheim.”

Hans-Jürgen Abt (Team Director Audi Sport Team Abt Sportsline): “It’s been a good day for us. We squeezed almost everything out of our grid positions that was possible. ‘Well done’ to Adrien (Tambay). With his second place he showed his potential. Mattias (Ekström) has returned to the podium as well. The highlight was Rahel (Frey). She battled with the world champions and gave everything. I’ve always believed that she’s got great potential – today she showed it. I’m hoping that she broke her duck now.”

Ernst Moser (Team Director Audi Sport Team Phoenix): “Our vehicles and all Audi cars had a good race speed. It’s a shame that Miguel (Molina) had to end his home round early because of a brake problem. He would have probably moved far to the front. In ‘Rocky’s’ case, the first pit stop was less than perfect. We lost one position. After the second stop, he was stuck behind Felipe (Albuquerque). At a later stage, he wasn’t able to overtake and drove fifth place home. A podium might have been possible.”

Arno Zensen (Team Director Audi Sport Team Rosberg): “For us, it was tragic: ‘Edo’ (Mortara) was running in a secure second place when he was forced to retire due to a technical problem. Filipe (Albuquerque) drove a superb race. For Audi, things were looking good; our team was just a bit unfortunate.”