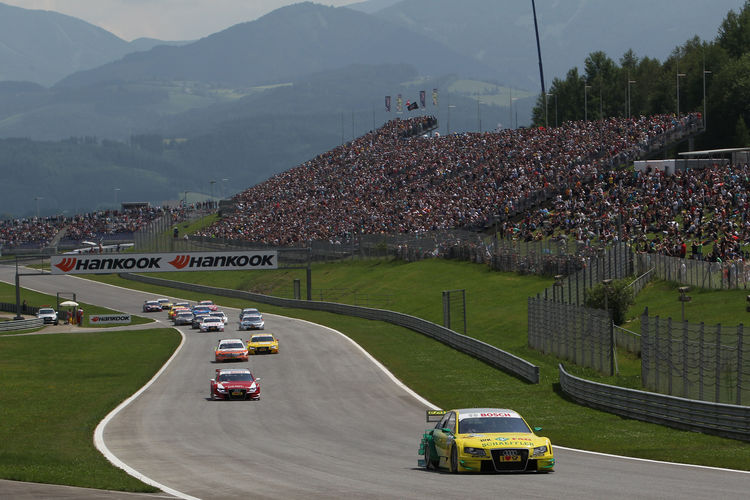 Dr. Wolfgang Ullrich (Head of AudiMotorsport)
“I’m very happy about this result. I’m particularly happy for Martin (Tomczyk). He drove a perfect race. Martin was really extremely strong this weekend and his team, Phoenix, did an outstanding job. I’m also particularly happy about Olly’s (Jarvis) third place. He had a difficult start into the season but has shown here that he’s back again. ‘Rocky’ and Timo (Scheider) managed to score points as well. In total, it’s a good result for Audi. Let’s continue this way at Le Mans ...“

Martin Tomczyk (Schaeffler Audi A4 DTM), 1st place
“I think this is a very special victory. Not only because it’s the first one for Team Phoenix with Audi in the DTM – but also because I’d promised it to Ernst (Moser) before the season. We couldn’t expect it to happen so early, so that it makes it all the better. The race today went the way a racer imagines a race to go: gaining a certain distance at the beginning and then controlling the race until the end. I’m simply happy!”

Oliver Jarvis (Audi Sport performance cars A4 DTM), 3rd place
“I can hardly believe it: my first podium in Audi Sport Team Abt Sportsline! We had a great weekend; we were quick in wet as well as in dry conditions. I’m happy to be back in the group of front runners. The car was brilliant. We had a slow first pit stop and lost a position to Ralf (Schumacher) in the process. It was good to have a strong race. Hopefully we can continue exactly like this at the Lausitzring.”

Mike Rockenfeller (E-POSTBRIEF Audi A4 DTM), 5th place
“My start was good. Then the situation became pretty tight in turn 1. I was running wide. That was obviously the right thing to do to avoid a collision and I was able to maintain my position. From then on I had to fight and was not able to completely keep up with the pace at the front. Still, my guys kept me in fifth place with a great strategy. The points we’re taking home are important. It’s too bad that Bruno Spengler managed to move forward so much. Congratulations to Martin (Tomczyk), who drove a great race. An Audi victory is fantastic!”

Timo Scheider (AUTO TEST Audi A4 DTM), 7th place
“The beginning was quite okay. Unfortunately, however, I lost a couple of small wings at the rear end of the car right in turn 2. But I managed pretty well. The race pace was good straight from the start. Mike (Rockenfeller), unfortunately, wasn’t quite as fast so that we lost touch with the front runners. Our pit stops weren’t completely on the mark. As a result, we finished the race only in seventh place. I’d have expected more. Strictly judging by our speed more would have been possible too. To be in front in the DTM simply everything has got to be right. Unfortunately, that wasn’t the case today.”

Miguel Molina (Red Bull Audi A4 DTM), 11th place
“The race was okay. We tried to attack straight from the start. The first pit stop was okay, we recovered a few positions. The second one wasn’t quite so good. But we’ve learned a few things here. Now I finally need a good qualifying session because our pace in the race was good again. We’re looking forward to our next run at Lausitz with optimism.”

Filipe Albuquerque (TV Movie Audi A4 DTM), 12th place
“Unfortunately, a car got in my way right in turn one. I had to run the kerbs and lost a few places. The first pit stop was okay, at the second one I lost some time. In the second stint I was struggling a bit with the brakes and then I had a good third stint. In free practice our speed had been much better than in the race today. I’m still lacking some experience.”

Edoardo Mortara (Playboy Audi A4 DTM), 16th place
“A difficult race. After the accident in turn 1 it was actually over for me. It was a silly maneuver on Engel’s part. We could have finished in the top five but that was no longer possible after the first turn. I was competitive here in wet and dry conditions.”

Rahel Frey (Glamour Audi A4 DTM), 17th place
“My third DTM weekend was definitely a positive one. We managed to catch up to the competition and were even a bit faster some of the time. My race pace was much better than it had been at the first two races, and also very consistent. Unfortunately, I was a bit overly eager at the start and received a drive-through penalty as a result. But we tried to make the best of the situation. At the end of the day, I’m pleased.”

Mattias Ekström (Red Bull Audi A4 DTM), retirement
“From the beginning to the end this was a weekend to forget for me. It’s no doubt a great disappointment because I’d been pinning high expectations on the race at the Red Bull Ring. I’ll give everything to make sure that things will be going better again two weeks from now at the Lausitzring.”

Hans-Jürgen Abt (Team Director Audi Sport Team Abt Sportsline): “’Well done’ to Martin Tomczyk and to the whole team. They really did a superb job here, and without making the slightest mistake. You need this in the DTM, we could see how tight the situation was becoming at the end. Martin had a very competitive package which put him in a position of being able to win. We need to continue to work hard with our cars to really achieve the best performance. You could see that we’re having a bit of a difficult time at the moment. That’s racing. A load has really come off my chest for Oliver Jarvis. He had a long, difficult period but did a flawless job today. I’m happy because that’s an important step for the next races. If he can sustain his motivation and performance we’ll still see many surprises.”

Ernst Moser (Team Director Audi Sport Team Phoenix): “We did everything right throughout the weekend and in the race today as well. Ralf (Schumacher) put us under heavy pressure. Martin (Tomczyk) remained without any mistakes – as did the team. That’s how you can win races. I’m extremely happy and delighted for my whole team. Our pit stops were so good that we always made up a little more time. Now we’ve got to digest all this and come back to earth.”

Arno Zensen (Team Director Audi Sport Team Rosberg): “The weekend had ups and downs. Obviously it had started out very well in the practice sessions. With a little more luck we could have even been farther at the front of the grid than on position four. It’s a shame that Edo (Mortara) was turned around at the start. When looking at his times on old tires, he was faster than Tomczyk after his tire change. So quite a bit would have been possible. It’s hard for a young racer to accept this. Then his Italian temperament got the better of him and he drove too far at the pit stop and damaged the stopping system. We tried to run a double strategy. Martin (Tomczyk) has shown what was possible. We can do that too. We’ve got to achieve this. Filipe’s pace wasn’t so bad either. He had the misfortune of being obstructed at his second stop by the damaged stopping system as well.”