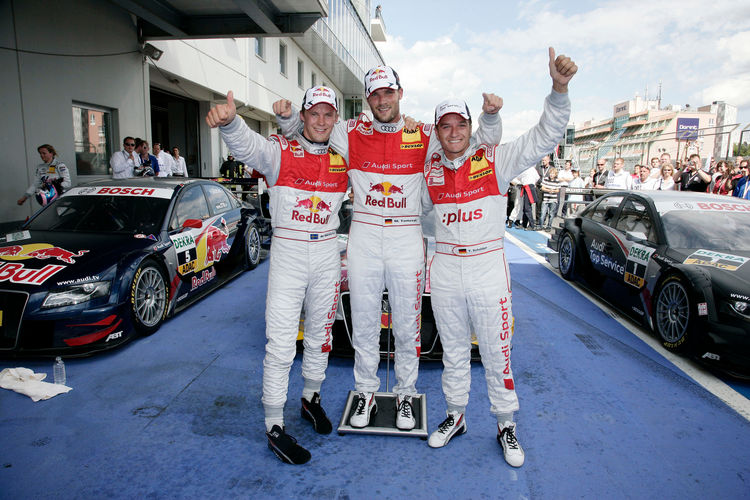 Audi was in a class by itself in the DTM race at the Nürburgring: Places one to four and more than a 23-second advantage over the competition. Quotes after the triumph in the Eifel.

Dr. Wolfgang Ullrich (Head of Audi Motorsport)
“The conclusion to be drawn from this result can only be a positive one for Audi: We really completed a perfect weekend here at the Nürburgring. Our cars had a very good set-up straight from the start. We were dominant in all the practice sessions. In qualifying, we had six Audi cars among the top eight and thus created a good base for the race. What counted was to make good use of this base by delivering consistent speed and flawless pit stops in the race. We managed to do that. It was a superb team performance and now we’ve got a good starting base for the remainder of the season because there’s nothing to give away in the DTM.”

Martin Tomczyk (Red Bull Cola Audi A4 DTM 2009 #6), 1st place
“That was a perfect weekend, and the race win perfectly rounded it off. From the first lap on Saturday forward, everything was going perfectly. Such a dominant showing is any driver’s wish, and it’s anything but easy to achieve something like this. That makes me even happier. I want to thank Audi and Team Abt Sportsline for such a great car and two super-fast pit stops.”

Timo Scheider (GW:plus/Top Service Audi A4 DTM 2009 #1), 2nd place
“Congratulations to Martin (Tomczyk), who had a great performance this weekend. He was a good reference point for us in terms of the set-up and the choice of lines. With second place I’m very happy, and even more so with the lead of the championship. Standing on the podium at my ‘home Grand Prix’ is a nice feeling.”

Mattias Ekström (Red Bull Audi A4 DTM 2009 #5), 3rd place
“It was a nice weekend. Audi was really fast here. Congratulations to Martin (Tomczyk), who set the pace and was simply unbeatable here. At least, I drove the fastest race lap in the race. The grid position and the first turns were crucial. After that, I maintained my third place and scored valuable points.”

Markus Winkelhock (Playboy Audi A4 DTM 2008 #12), 4th place
“The new cars were really quick today. It wouldn’t have made any sense to go for an all-out attack there. I tried to find my own pace, drive my own race and maintain my position. That worked out. I’m overjoyed. I started from position seven and finished in fourth place. That’s a super result. After the last four races it was time to experience a nice success again.”

Mike Rockenfeller (S line Audi A4 DTM 2008 #11), 10th place
“Actually, my race went almost the same way as every race has for me this year. I had a good start. I was driving turn 1 on the outside, Tom (Kristensen) must have been running alongside me on the inside. I was on the better line for turn 2, but was very careful. Then, everything happened very fast. I have to watch the whole situation again myself. Some rivals hit my car. I lost a lot of time and was apparently running in the last place. Then I drove my race and tried to move forward. I still finished in tenth place. I had to take it very, very easy on the final sector because of a problem with the fuel can during the last stop. There was not enough fuel in the tank. I just coasted around. For Audi and my team-mates, it was a great weekend: Three current cars on the podium and Markus (Winkelhock) in fourth place – ‘Well done.’”

Tom Kristensen (100 Jahre Audi – A4 DTM 2009 #2), retirement (accident)
“Unfortunately, my race was very short. The start was good, and so was the first half of the first lap. In the fifth turn I was fighting for fifth or sixth place when someone hit the right rear of my car really heavily. That’s why the car spun into a guard rail. I tried to continue driving but had to retire because the body and suspension had been too heavily damaged.”

Alexandre Prémat (Audi Bank A4 DTM 2008 #14), retirement (accident)
“I’m very disappointed by this race. I’m equally disappointed for Team Phoenix and for Audi because we weren’t able to score any points. The car was very fast. When I passed Olli (Jarvis), he apparently didn’t see me and turned in. The suspension was damaged in the incident.”

Oliver Jarvis (Audi Cup A4 DTM 2008 #15), retirement (accident)
“Unfortunately, the race ended in an accident. On the first lap my right outside mirror and a few body parts were damaged. Alex (Prémat) tried to overtake me on the inside. Because I didn’t have a mirror anymore, I didn’t notice him and we collided – a racing accident. I feel very sorry for Team Phoenix, which would have deserved a good result.”

Katherine Legge (Audi Collection A4 DTM 2008 # 21), retirement (accident)
“I’m very disappointed. We could have finished in the points today. A place among the top ten would definitely have been possible because there were so many accidents. The start was good but in the first turn I was in the middle of a sandwich of cars. After a few collisions my steering broke.”

Hans-Jürgen Abt (Team Director Audi Sport Team Abt Sportsline)
“That was sensational. The three guys showed everything and gave everything. You can simply be proud of the whole squad. I’ve seldom seen such a great team result in the DTM with this kind of pace and performance. I’m also incredibly happy for Martin (Tomczyk). He drove sensationally and was the man of the weekend.”

Ernst Moser (Team Director Audi Sport Team Phoenix)
“If you’re running in places seven and eight after the first few laps and notice that Mercedes’ pace is slower you’re even more disappointed if you don’t achieve what would have been possible. Apparently, there was a misunderstanding and the right outside mirror was missing on one of the cars. Losing both cars in such a mishap is pretty painful – especially at your home round. We could have scored a good amount of points for the team and drivers’ standings – too bad.”

Arno Zensen (Team Director Audi Sport Team Rosberg)
“Really a class act! A one-two-three-four win for Audi, Markus (Winkelhock) in fourth place. He had a sensational start and drove a fantastic race. Everything fit. Thank you to the team, thank you to Audi, thank you to Markus. It was simply a wonderful weekend. ‘Rocky’ has the problem with the first lap on which he is always particularly unfortunate. At least, he still finished among the top ten.”