{{ activeItem() }}
Twitter
04/02/20
The Audi #etron Sportback offers a wide range of infotainment and #connectivity applications. Which feature is impo… https://t.co/bAqaFIsZ7z
04/02/20
The latest #automotive news directly to your home: We will present to you the #Audi A4L #premiere via #Chinese live… https://t.co/fLiHiqvIjt
04/02/20
Do you already know about the #FourRingsChallenge? Show us your creative #Audi rings. #AudiTogether https://t.co/PqyboIlPMJ
04/02/20
Music connects people: Violinist Lisa Batiashvili, artistic director of the #Audi Summer Concerts, will give an exc… https://t.co/T0Ut4WYQ4n
Audi on Twitter
YouTube
03/13/20 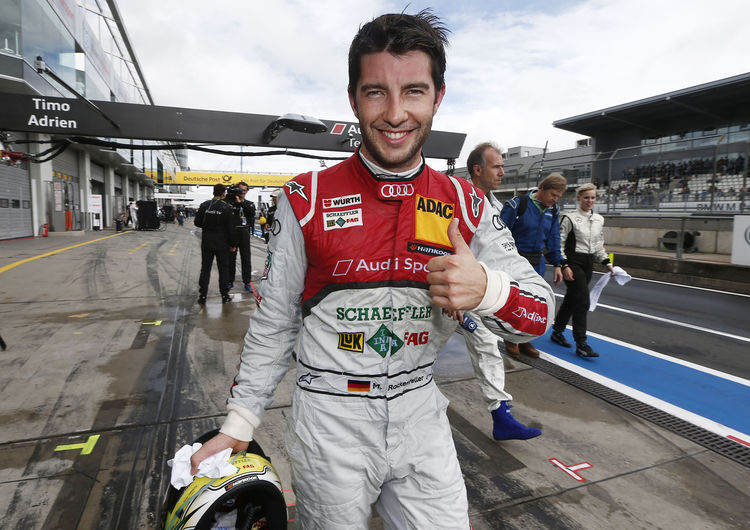 Lead of the standings extended: With a strong recovery Mike Rockenfeller finished in fourth place – quotes after the turbulent DTM race at the Nürburgring.

Dr. Wolfgang Ullrich (Head of Audi Motorsport): “That was a race in difficult conditions – and perfect advertising for the DTM. There were battles and tussles everywhere in the field, including among brand colleagues. For my taste, there may have been too many duels among our guys today but the spectators probably enjoyed it. After the shock in turn one, Mike (Rockenfeller) and his team did everything right – these were very important points today in the battle for the title.”

Dieter Gass (Head of DTM): “This was a varied and interesting race. When you look at the start and then see your Championship leader off track in the first turn that’s the worst beginning you can imagine. We were all the way at the rear of the field but made the right decision to call Mike (Rockenfeller) into the pits behind the safety car and to give him rain tires although that couldn’t be counted as a mandatory pit stop yet. But it was clear that for the existing conditions it was the right tire. If you want to move forward from the rear it’s the only chance you’ve got. From that point on, the race went very well. We could have even hoped for more after Mike had a relatively significant advantage before the first pit stops. But considering the way this race went and the difficult conditions we’ve really got to be pleased with this result.”

Mike Rockenfeller (Schaeffler Audi RS 5 DTM), 4th place
Tires: standard/rain/option/standard
“Obviously, I’m very pleased with the points –that goes without saying when you’re almost the last car in the field after the first turn. In these conditions, anything can happen and it went optimally. Of course I’d prefer standing on the podium and to be smelling of champagne. But that’s not always possible in the DTM; the field is too close for that and the level much too high. That means you’ve got to take what you can get. And this fourth place today is really worth a lot.”

Adrien Tambay (Audi ultra RS 5 DTM), 6th place
Tires: option/rain/option
“I couldn’t be much happier because the weekend hadn’t started really well. I started the race from position 14 on the grid and ultimately took sixth place. Like at Moscow, I scored points. Now I am where I wanted to be. And I’m hoping to be even further in front in the next races.”

Miguel Molina (Audi RS 5 DTM), 8th place
Tires: option/rain/option
“It was a difficult race due to the changeable weather. I made a mistake. But I scored my first points today in the current season. Now I’m optimistic for the next race. We’re traveling to Oschersleben where I was on the pole position for the first time in the DTM.”

Jamie Green (Red Bull Audi RS 5 DTM), 9th place
Tires: standard/rain/option
“Chaotic is the word I’d like to circumscribe the race with. Although I made it into the points, I had too many adventures to master for my taste. I didn’t manage to move off properly at the start. Then, driving in the rain on slicks certainly wasn’t fun. I also had a couple of rough duels with brand colleagues. I didn’t like that either. But I’m pretty happy about ninth place.”

Filipe Albuquerque (Audi Financial Services RS 5 DTM), 11th place
Tires: standard/rain/option
“A hard race, really difficult but crazy and funny too. Unfortunately, I barely missed my goal of finishing in the points. And that wasn’t due to the speed but our second pit stop wasn’t very good – it probably cost the Championship point.”

Edoardo Mortara (Playboy Audi RS 5 DTM), 12th place
Tires: standard/rain/option
“Bruno Spengler bumped me after the start and the other Canadian subsequently turned me around. That meant my race was over. Another weekend to forget.”

Mattias Ekström (Red Bull Audi RS 5 DTM), 13th place
Tires: option/rain/option
“With the rain in the beginning, it wasn’t easy for us drivers. Instead, the entertainment value for the crowd was all the greater. Unfortunately, I wasn’t able to finish the race with points. Subjectively, more should have been possible but like anywhere else there’s no such thing as ‘ifs, buts and whens’ in the DTM.”

Timo Scheider (AUTO TEST Audi RS 5 DTM), retirement
Tires: standard/rain
“A turbulent race with conditions I’d actually been wishing for in order to move forward from the rear. I had a good start and got through turn one well. But in the second corner, I was turned around by Andy Priaulx and dropped to the end of the field. Due to the safety car I was able to quickly catch up again. With a good pace I recovered as the race went on but then I was hit by Filipe (Albuquerque), who turned me around. While I was spinning, Jamie (Green) hit me as well and the suspension collapsed in the process. That was the end of my race. It’s painful because the problems keep lining up and we don’t manage to catch a lucky streak.”

Hans-Jürgen Abt (Team Director Audi Sport Team Abt Sportsline): “That was a very turbulent race with lots of rough edges. Congratulations to Mike (Rockenfeller). He extended his lead of the standings. That was the most important thing for Audi this weekend. Our team tried to support him in this as best we could.”

Ernst Moser (Team Director Audi Sport Team Phoenix): “I think I’ve never lost as much energy during a race as I did today. Big praise goes to the strategy squad. The decision to immediately call Mike (Rockenfeller) to the pits and to give him rain tires was the key to success. Mike showed a very strong performance in the rain. On the option tires he was a bit too cautious for my taste but we’re battling for the title and that’s why it’s okay to practice some restraint now and then. A 35-point advantage in the standings. Wonderful. Miguel (Molina) was running in third place for a long time. After his mistake he battled his way back into the points. His form curve is pointing upward.”

Arno Zensen (Team Director Audi Sport Team Rosberg): “First of all, I’d like to congratulate Mike Rockenfeller and Audi Sport Team Phoenix. A perfect race and an extension of the lead in the Championship. For us, the race didn’t go smoothly. Edoardo (Mortara) was involved in a few smaller battles right on the first lap and dropped back. That wasn’t his fault. Filipe (Albuquerque) drove a great race and could easily have made it into the points. Unfortunately, one of the pit stops didn’t work out. I can only apologize for that.”