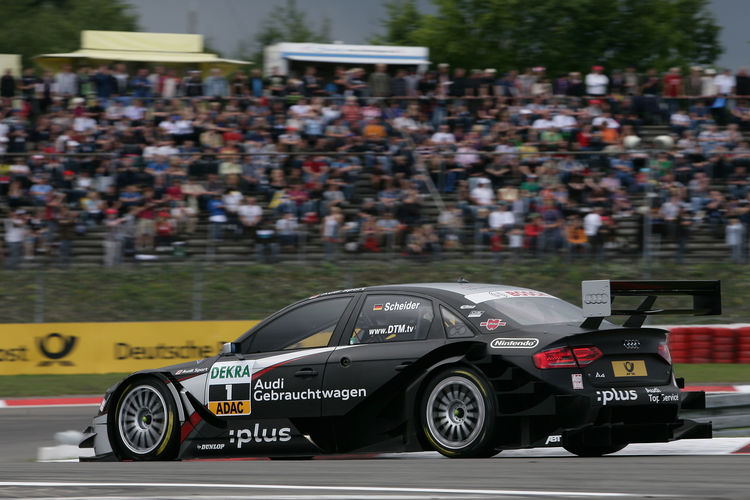 The DTM race at the Nürburgring ended in a disappointing result for Audi. Quotes after the race.

Dr. Wolfgang Ullrich (Head of Audi Motorsport)“That was a very disappointing race for us – the worst we’ve delivered this year, although we arrived here with great expectations. The start was very important but not crucial. During the course of the race we saw that none of our cars even came close to having the kind of performance we’d been expecting – particularly after ‘Eki’s’ strong showing in yesterday’s qualifying. Now, we’ve got to look ahead, do a thorough job of working on the issues and put ourselves back in a position of being capable of winning 14 days from now at Zandvoort. There are still 60 points to be awarded for victories in the championship.”

Timo Scheider (GW:plus/Top Service Audi A4 DTM #1), 4th place
“I had a good start and was running in fourth place as early as after the first lap. Afterwards, there were some pretty hot fights here and there between Jamie (Green), Gary (Paffett) and me. Thanks to a good strategy and partly good speed I was able to stay within reach of third place up to a certain point. But then my performance started dropping. I made a mistake as well because I simply pushed too hard in order to stick to my guns. In this respect fourth place is okay for my personal trend, but it isn’t what we’d been expecting. We need to analyze why we weren’t able to show our performance on Friday today after the rain. We definitely won’t give up!”

Mattias Ekström (Red Bull Audi A4 DTM #5), 7th place
“That wasn’t what we’d been hoping for. My start was poor. Afterwards, I wasn’t able to downshift properly while braking into turn one. My front wheels locked and I lost more places. After that, everything actually went according to plan, but we were too slow.”

Mike Rockenfeller (S line Audi A4 DTM #10), 9th place
“Ninth place was the maximum. Maro Engel was quicker. Performance was simply lacking and apparently that was the case almost everywhere with Audi. Compared with the others, my pace wasn’t so bad. But it’s disappointing not to score any points. The poor starting position was crucial.”

Oliver Jarvis (Tabac Original Audi A4 DTM #2), 11th place
“The race was a disaster that I’d like to forget as quickly as possible. The start was okay. In turn one I had to run wide on the outside. Afterwards, I was struggling with the car. I lost two positions due to mistakes. And then, unfortunately, there was an incident of body contact. I’ve got to apologize to Alexandre Prémat and Team Phoenix for this. Alex, unfortunately, drove into the tire wall as a result. For the second time there’s been an incident between Alex and me on this track. It wasn’t intentional – I apologize for what happened. Afterwards, I was simply not fast enough.”

Martin Tomczyk (Red Bull Cola Audi A4 DTM #6), 13th place
“That was nothing to write home about! In turn one I was turned around and the rear of my car was damaged. Then I was on the penultimate position and had to make up ground. I then collided with Cheng in the chicane and destroyed my front splitter. Afterwards, the car wasn’t performing at all any more. My lap times were out in the middle of nowhere. I just finished the race without having the slightest chance.”

Miguel Molina (Audi Bank A4 DTM #18), 14th place
“A very bad race full of mistakes. It began with a jump start for which I received a drive-through penalty. On lap one I was too cautious. I need to become more aggressive. There have got to be visible improvements in this respect.”

Katherine Legge (Glamour Audi A4 DTM #15), 15th place
“The race was a catastrophe. I produced a jump start. My pace wasn’t so bad but some communications problems came up. I’d sometimes hear other teams and then nobody at all. I plugged and unplugged the radio. A voice was saying, ‘pit on this lap,’ but it wasn’t my team. I pitted and of course nobody was ready there. After that, the pit board was the only means of communications.”

Alexandre Prémat (TV Movie Audi A4 DTM #9), retirement (accident)
“After a very good start my race was unfortunately short. I was already running in eighth or ninth place and thus in a position of scoring points. I attacked Oliver (Jarvis) and was driving alongside him. He slightly touched me, which caused my car to become unstable while braking. Then we were driving side by side through the short circuit. He didn’t leave me any room and I slipped into the tire wall. That’s really a shame.”

Markus Winkelhock (Playboy/GW:plus Audi A4 DTM #14), retirement (accident)
“My start was quite okay. I saw that Katherine (Legge) in front of me had jump-started, so I knew that I’d already gained one position. Susie (Stoddart) had a poor start. I overtook her. In front of the first corner I was behind Martin (Tomczyk), who was driving relatively far on the outside. I could have passed him on the inside. But then I felt an impact. Susie Stoddart hit the side of my car full-force. The front and rear suspensions broke. My race was ruined and over.”

Hans-Jürgen Abt (Team Director Audi Sport Team Abt Sportsline)
“We’re all very disappointed. Clearly: all of us had expected much, much more. This is how difficult or mean racing can be. ‘Eki’ destroyed his race at the start. Timo (Scheider) drove a pretty good race. All the others were simply too slow. In the end, we need to continue to work on our pace and on delivering a solid performance. This will be our task for the next few weeks. We’re not giving up. We’re not even halfway through the season. Let’s cheer up! There’ll be better days again.”

Ernst Moser (Team Director Audi Sport Team Phoenix)
“It’s a shame not to be scoring points in a home round. It was clear that it would be a difficult race from these grid positions without rapidly changing weather conditions. We tried our best. Our pace was simply not fast enough to recover positions. We went with the flow. ‘Rocky’ drove a flawless race. Alex (Prémat) suffered a case of misfortune. It’s really too bad when two brand colleagues collide, particularly in such an unfortunate way.”

Arno Zensen (Team Director Audi Sport Team Rosberg)
“Markus (Winkelhock) was planning to stay out of all trouble. He turned into the first corner in a completely normal way and was then run over by Susie (Stoddart). That meant the end of his race. That’s a real shame. But starting from this position is simply a problem. In Katherine (Legge)’s case, after her jump start, there were communications problems during the course of the race that were of a technical nature.”