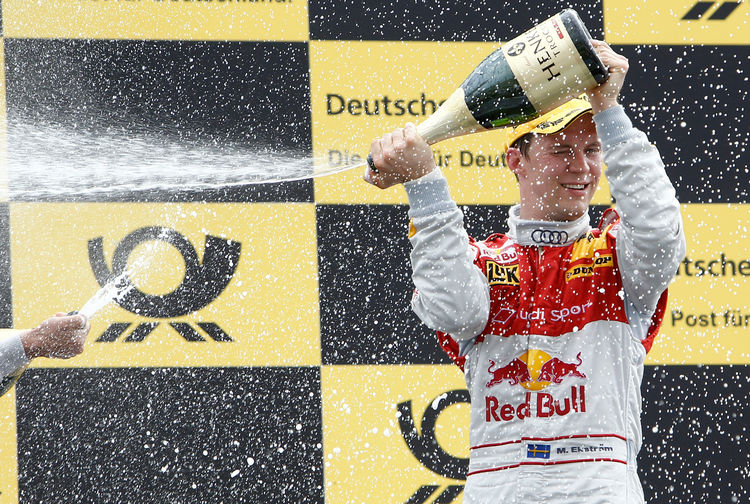 0.591 seconds were all that Audi was lacking to clinch the home victory at the Norisring the brand had been hoping for. Nevertheless, there were quotes expressing satisfaction after the race.

Dr. Wolfgang Ullrich (Head of Audi Motorsport)
“After yesterday’s qualifying we can really be satisfied with the race. It was a very good performance of the entire team. Our cars were really fast and that goes for the vehicles of both generations. The strategy and the pit stops were very good as well – and ‘Eki’ fought all the way through to the end. Oliver (Jarvis) and Timo (Scheider) drove great races, too. Alexandre Prémat was extremely quick in last year’s car. Again: it was a very good performance by the entire squad.”

Mattias Ekström (Red Bull Audi A4 DTM #5), 2nd place
“I’m pleased with my performance. But in the end you’re second although you feel that you’ve done everything right. In the beginning I lost a little time behind Bruno Spengler, so Jamie Green was four or five seconds in front of me. I fought and closed up to him with just a half-second gap between us. I put on a lot of pressure but he didn’t make a single mistake. ‘Well done’ as far as his race went: he didn’t give me the slightest chance. Being in front of Bruno Spengler was particularly important for us. That way, we’ve made up a few points in the championship.”

Oliver Jarvis (Tabac Original Audi A4 DTM #2), 4th place
“I had a pretty good start but had to evade Martin Tomczyk who stalled in front of me. Afterwards I was running rather comfortably behind Mattias (Ekström). I had a little pressure from Gary (Paffett) but was able to keep him at bay. The lap times were good, so we stayed out for a long time. Both pit stops were fantastic. Unfortunately, I lost some time behind Di Resta in the middle sector. That cost me the chance to overtake Spengler. On the whole, fourth place is a good result – particularly considering that things started so poorly on Friday.”

Timo Scheider (GW:plus/Top Service Audi A4 DTM #1), 5th place
“I had a reasonably good start. In turn one I went around the outside where there was a lot more room. That was the right decision. But at the exit I got sandwiched by Oliver (Jarvis). I had to lift; otherwise we’d have had a collision. Besides Olli, Paffett got past me in the process as well. That’s too bad because if he hadn’t I’d have been in a good position straight away. Afterwards we had pretty decent pace. My mistake was to try and recover all the lost ground right at the first pit stop and that I slid too far in the process. But the guys did a great job of compensating for this glitch. Afterwards the fight was just about tenths any more and hoping for something unforeseen to happen. I’d predicted that a place among the top five would be possible. After having started from P10 I can actually be pretty pleased with my result.”

Alexandre Prémat (TV Movie Audi A4 DTM #9), 7th place
“I’m happy about having scored two points. A tremendous start! I was immediately running alongside Timo (Scheider) and let him have some room. Then I drove the same rhythm as the other cars around me. I was eighth until Ralf Schumacher received a drive-through penalty for his jump start and so I moved up to seventh place. The race was very tough. It’s simply very, very hot in the cockpit. And that makes it hard to stay concentrated. The brakes suffer as well.”

Martin Tomczyk (Red Bull Cola Audi A4 DTM #6), 8th place
“Obviously, that was a poor start. It was a mistake of mine. My engine stalled because I underestimated the amount of grip. So I was running all the way at the rear. I did set good times, but that didn’t help in any way. I still pushed forward to eighth place, for which I collected one point. In the first race of the season there was a technical failure, in the second one a mistake by the team. In the fourth race it was my own mistake. That means we’ve seen it all now …”

Mike Rockenfeller (S line Audi A4 DTM #10), 12th place
“My start wasn’t so bad. I was able to recover a few positions. When Di Resta spun in the Schöller-S I lost a bit of momentum. As a result, Coulthard managed to overtake me. I was fighting with him for a long time. It’s a shame that I didn’t get out in front of Di Resta after the second pit stop. That meant that, basically, twelfth place was the best I could do. I had some brake problems because one of the cooling ducts was clogged. That made things a bit difficult. Ralf Schumacher ultimately passed me because I made a braking mistake in turn one. After starting from P16 there wasn’t a lot more that was possible today – just two positions. So the only thing to do now is to chalk it up to experience and to look ahead to the Nürburgring. This wasn’t a good weekend for us.”

Katherine Legge (Glamour Audi A4 DTM #15), 16th place
“A race to forget. At the start I was brushed by another car. The brake cooling was damaged. I didn’t have any downforce at the front any more. That caused me to lose a lot of time whenever I was running behind another car. So I couldn’t fight any battles with anyone else. I must say that my adrenaline level has been higher before ... a clear difference from last year’s race in Nuremberg.”

Miguel Molina (Audi Bank A4 DTM #18), retirement (accident)
“After my jump start, which stalled the engine, I became entangled in a few battles at the beginning of the race. But my pace wasn’t good. Then (Maro) Engel brushed me in the last turn which damaged my steering. That meant the end of my race.”

Markus Winkelhock (Playboy/GW:plus Audi A4 DTM #12), retirement (accident)
“My start was pretty good. I had to lift again because Martin (Tomczyk) stopped. I didn’t have a perfect run through turn one because someone overtook me on the inside. On the first few laps the car was okay and then I had too much oversteer all of a sudden. I had to choose early braking points because my car was sliding straight forward. At some point in time Martin Tomczyk and David Coulthard drove past me. In the Dutzendteich hairpin I slid into Coulthard’s side and ruined my front splitter in the process. My car started to oversteer. In the Schöller-S I later hit the dirty line. I drove straight ahead but caught the wall with the rear wheel and that ended my race.”

Hans-Jürgen Abt (Team Director Audi Sport Team Abt Sportsline)
“We can be satisfied with the way the race went. It was a sheer and utter battle. There’s no need to hide under a rock when you finish with a 0.5-second gap. Although we didn’t win I do believe that we’ve shown a good performance. ‘Well done’ to the whole team. For the first time this year all four current-generation cars finished in the points. That’s a great team result!”

Ernst Moser (Team Director Audi Sport Team Phoenix)
“Seventh place for Alex (Prémat) is a very satisfactory result considering this kind of a starting base. ‘Rocky’ was driving in traffic for a long time and had to battle with the others. That meant that with a normally scheduled pit stop we’d have returned to the field right in the middle of the leading cars. So we had to keep him out because otherwise you keep getting blue flags and that ruins the whole race. Consequently, we couldn’t make a strategy of our own but had to react to the pit stops of the others.”

Arno Zensen (Team Director Audi Sport Team Rosberg)
“In the battle with David Coulthard Markus (Winkelhock) saw an opportunity and thought he’d be able to get past him. That was a little too optimistic. After the damage he suffered in that duel and contact with the wall his race was over. That’s a shame because there was still some potential. Katherine (Legge) lost everything at the start because aerodynamics components on the front left and right rear were damaged in some incidents with body contact. That’s why she couldn’t find a right race rhythm any more either.”