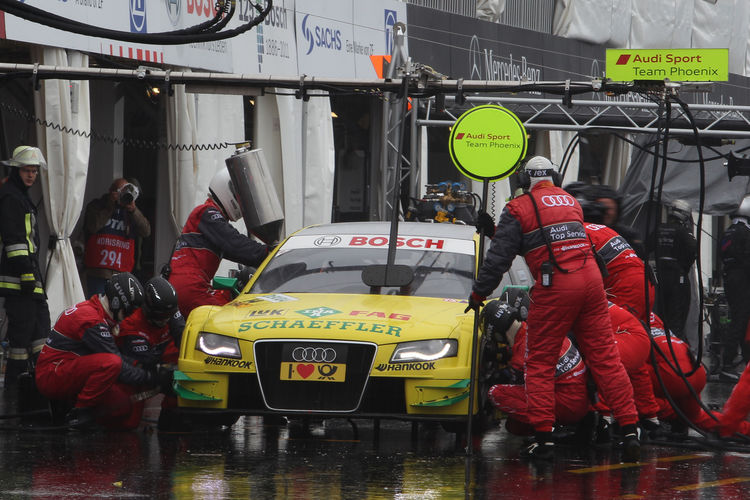 In the Nuremberg rain battle Audi finished the race with all nine cars. Martin Tomczyk clinched another podium result. Quotes from the Audi camp after an extremely difficult DTM race.

Dr. Wolfgang Ullrich (Head of Audi Motorsport)
“Overall, it was a good race for us. We chose an aggressive strategy. It worked out particularly in Martin’s (Tomczyk) case. You could see that we were able to show a good performance in the rain. If the race had lasted a few laps longer we could have achieved even more. But it was absolutely right to deploy the safety car in the heavy rain – it would have been too dangerous otherwise.”

Martin Tomczyk (Schaeffler Audi A4 DTM), 3rd place
“Boy was that wet! And my car was simply superb – as the times have shown. When the pit stops started I didn’t even know which position I was on. The water spray was so heavy that I simply drove my laps. The decision to stop the race was clearly right. There was too much water on the track and we had hydroplaning. Naturally, third place after starting from position ten is outstanding. It couldn’t have worked out any better than this. I’m happy.”

Timo Scheider (AUTO TEST Audi A4 DTM), 4th place
“My race was quite okay. I had a decent start. And I think we had a good strategy. At the second pit stop we again used the first set of tires. That was definitely good. But then there was a lot of rain and that hurt us a bit. My thanks go to the guys for having done a flawless job. We kept the car on track, which was one of the most difficult tasks today.”

Edoardo Mortara (Playboy Audi A4 DTM), 5th place
“Fantastic! I’m very pleased for the whole team and for Audi. I enjoy a lot of backing and good support. The race was pretty difficult today. But considering that, it went pretty well. In the end I finished fifth and that allowed us to score many points. Of course that’s good. The rain was very heavy today. I could hardly see any further than the windshield. In addition, there was fog on the windows. So there was a certain danger.”

Mattias Ekström (Red Bull Audi A4 DTM), 7th place
“That was a very disappointing race end. I had the feeling that we had a good car. When the pit stops started and the rain was getting heavier everything went wrong for us. It’s simply disappointing to go home with two points when you’re in contention for a podium place.”

Miguel Molina (Red Bull Audi A4 DTM), 12th place
“The race was difficult. After a collision my car was damaged. The driver’s door opened. The guys repaired that during the stop but the aerodynamics were still impaired. It wasn’t easy to finish the race. Then the rain was getting heavier and heavier. In the end I finished in eleventh place – yet again ...”

Mike Rockenfeller (E-POSTBRIEF Audi A4 DTM), 14th place
“The conditions were certainly difficult. But after a good warm-up session I thought we had a chance to move forward in the race. In some of the phases our lap times were pretty good. But the rest of the time I was just part of the pack and couldn’t achieve anything. That was disappointing here. We’ve got to close the book on it now. The Norisring is over and we’re concentrating on the next race.”

Oliver Jarvis (Audi Sport performance cars A4 DTM), 15th place
“A disaster for me. The whole weekend we were fast. But in the race everything that could go wrong went wrong. There was an incident of contact with Miguel Molina that I want to watch on TV first before judging the situation. I was at the apex of the corner and had the impression that I’d left a lot of room for him. Still, we touched and I spun.”

Filipe Albuquerque (TV Movie Audi A4 DTM), 16th place
“Unfortunately, this was an absolutely bad weekend for me. I wasn’t fast enough and didn’t know the track either. That was a difficult test, and in a series like the DTM at that. Qualifying had already been fair to middling, but the race was even worse. Due to the rain it was chaotic for everyone. The only positive thing I’m taking with me is the fact that I finished.”

Rahel Frey (Glamour Audi A4 DTM), 17th place
“I drove a lonely race, but it’s been a good experience. It was my first wet race in the DTM. The Phoenix crew has again given me fantastic support today. We finished the race and were able to gather experiences. That was the most important thing in these difficult conditions.”

Hans-Jürgen Abt (Team Director Audi Sport Team Abt Sportsline): “The conditions were irregular. I feel that for safety reasons it was absolutely right to stop the race. Of course it was a shame for the large crowd that the weather was bad because the Norisring is normally a really great event. For us as a team and for the drivers it was a very difficult race today as well.”

Ernst Moser (Team Director Audi Sport Team Phoenix): “In such weather anything is always possible. But that it worked out this well! Shortly before the safety car period we were running in third place and remained there. Obviously, that’s a dream. We’re on podium again and remain very far at the front of the championship. We may have lost first place but we’ll recapture it at the Nürburgring at our home round. Rahel (Frey) drove really good lap times in the race. She’s making progress. That pleases me too.”

Arno Zensen (Team Director Audi Sport Team Rosberg): “This was a very entertaining and thrilling race. We stopped very early and Edo (Mortara) was able to set very good times when the track was clear. The strategy was perfect. He drove a sensational race. I’m overjoyed. I want to thank the squad! Filipe (Albuquerque) drove his first race at the Norisring. We’ve got to chalk this up to experience.”