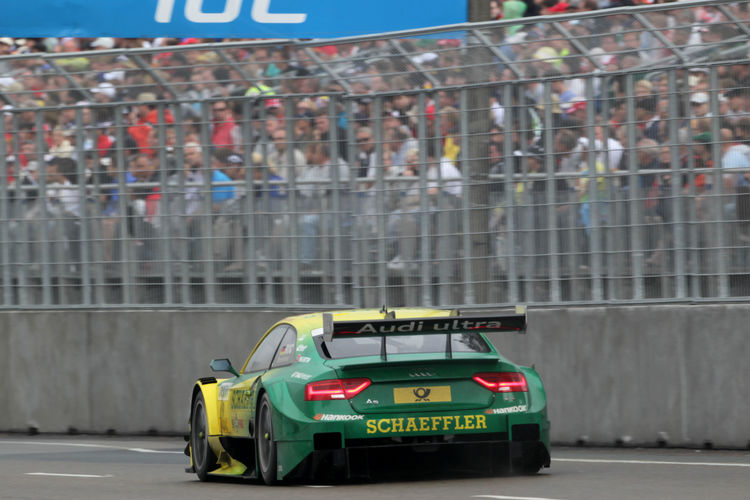 Mike Rockenfeller on position six was the best Audi driver at the Norisring. Quotes after the race.

Dr. Wolfgang Ullrich (Head of Audi Motorsport): “That was a weekend to forget. For us, right after turn one it was clear that this wouldn’t be our day. ‘Rocky’s’ (Mike Rockenfeller) car was pretty much the only one of our vehicles that got out of this unharmed. Everyone else was involved in the scrapping, and Edo (Mortara) and Mattias (Ekström) were even forced to retire because of it. Most of the other cars had suffered some damage and as a result were no doubt unable to draw on their full performance potential. Now there’s just one thing to do: quickly forget the whole thing and look ahead.”

Mike Rockenfeller (Schaeffler Audi A5 DTM), 6th place
“From grid position eleven, my expectations hadn’t been very high. The changeable weather of course benefited me to some extent but, still, my race wasn’t optimal in every respect. The key toward advancing was turn one, which I managed to get through unharmed on the inside in all the commotion. Afterward, I only concentrated on driving fast laps. Sixth place was the maximum for my team and me that was possible.”

Miguel Molina (Red Bull Audi A5 DTM), 12th place
“My race was pretty good. I started from position 20 and finished on twelfth. Our strategy and the pace in the race were good but I’ve got to get better in qualifying. For the next races we need to particularly work on that.”

Adrien Tambay (Audi ultra A5 DTM), 15th place
“An eventful race. I had a great start and a good first lap. I was running on position seven and then was hit. My car was damaged in the incident. Later, Merhi turned me around and that cost a lot of time. Then I unfortunately touched Susie (Wolff) while overtaking and received a drive-through penalty. My speed on the last laps was good. I’m looking forward to the next race.”

Timo Scheider (AUTO TEST Audi A5 DTM), 16th place
“That was no doubt the worst weekend I’ve ever had in the DTM. I started from the last row and had a good start. I couldn’t see anything in the road spray. In the traffic jam in turn one I had contact with the car in front of me. I lost a few aero parts and afterward the car felt bad. It was difficult to finish the race that way.”

Rahel Frey (E-POSTBRIEF Audi A5 DTM), 17th place
“That was a race to forget. Not I was driving the car but the car was driving me. We need to analyze now what caused that. It doesn’t seem to have been the weather because I was running well in the rain during the warm-up.”

Edoardo Mortara (Playboy Audi A5 DTM), retirement
“In turn one, after the start, I was shoved from behind. That ruined my hopes for a good result early on. At least I was able to continue to battle at first and also gave everything to recover some places. But the car just couldn’t be driven well anymore and I was ultimately forced to retire.”

Mattias Ekström (Red Bull Audi A5 DTM), retirement
“It doesn’t take long to tell the story of my race. Some guys obviously thought that they could win a DTM race right in the first turn. One of the victims was my Audi that had been too heavily damaged for me to be able to continue to drive.”

Hans-Jürgen Abt (Team Director Audi Sport Team Abt Sportsline): “That was a very unfortunate race. The situation which ‘Eki’ (Mattias Ekström) became entangled in after the start was definitely borderline. It’s a shame, as that of course kicked us out of the race completely. But as the saying goes in motorsport: chalk it up to experience and concentrate on the next race.”

Ernst Moser (Team Director Audi Sport Team Phoenix): “A turbulent race with changeable weather. We advanced from position eleven to six. Our aim had been to move forward by a few more places but the competition was very strong – and it took a long time for the tires to develop grip. Our set-up was good. ‘Rocky’ and the squad did a superb job. Miguel (Molina), too, had a flawless race and a good speed.”

Arno Zensen (Team Director Audi Sport Team Rosberg): “What happened in turn one was a bit of disaster. We don’t know exactly what happened there. We still need to check that. But finishing on position eleven with the second-best Audi does not make me very happy.”