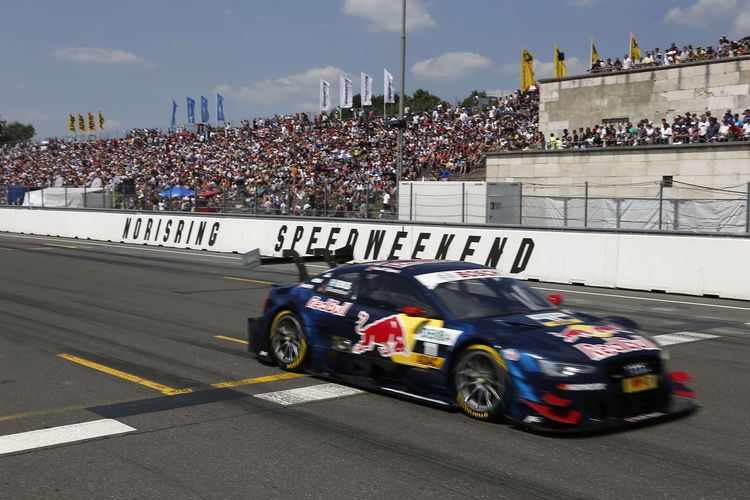 Mattias Ekström clinched the first victory for Audi at the Norisring since 2002 – quotes after a memorable race.

Dr. Wolfgang Ullrich (Head of Audi Motorsport): “Ever since we returned to the DTM with a factory-backed commitment in 2004 we’ve been waiting for this moment. A victory at the Norisring in front of this fantastic crowd, such a large number of Audi fans and our employees is simply a very special one. I’m particularly pleased about Mattias (Ekström) of all drivers having been the one to clinch this long-awaited success for Audi because in all the years here at the Norisring he was strong and often came very close to winning. Now it finally happened and, to top it off, it happened on his birthday. Having achieved the home victory at the Norisring just three weeks after the triumph at Le Mans is simply fantastic and a great reward for the whole squad that worked hard to achieve this. Tonight, we’ll really celebrate!”

Dieter Gass (Head of DTM): “This is no doubt a fantastic result for us – almost in every respect. First of all, sincere congratulations to ‘Eki’ (Mattias Ekström) and Team Abt. They did everything right and had a superb strategy. Surely, they were a bit fortunate with the safety car as well. Mike Rockenfeller recovered from position 21 on the grid to fifth place with an extremely risky strategy which he was able to put on track by an intelligent driving style though. Obviously, it’s a pity for Edo (Mortara). He had the podium in sight and it was just a question of finishing in second or third place. The actions that happened there were no doubt borderline but that’s still got to be looked at.”

Mattias Ekström (Red Bull Audi RS 5 DTM), 1st place
“Having a birthday on race day isn’t always bad. I enjoyed the race, it was really a thriller. In the middle of the fight with Edo (Mortara) it was all about perfection. He was driving really well but I could see that he was starting to have problems with the brakes. As my brakes were good, I went flat-out because the others behind me were catching up. Winning at the Norisring is the best thing you can achieve in your career.”

Mike Rockenfeller (Schaeffler Audi RS 5 DTM), 5th place
“It was a chaotic race, as always at the Norisring. I was massively struggling with the car, the brake was overheating, the pedal long. I switched the brake balance back and forth and drove each lap as fast as I could. I was constantly surrounded by a few Mercedes cars that didn’t make life easy for me. I’m very pleased. Starting from position 21 and finishing in fifth place is absolutely okay – especially here at the Norising. The team had a great strategy. We took a high risk with the two stops during the safety car period, but it paid off.”

Filipe Albuquerque (Audi Financial Services RS 5 DTM), 12th place
“At the start, I lost a few places. I wasn’t able to keep the pace of the cars running on option tires. My pace only improved later. In the safety car period, we stayed out which didn’t pay off strategically. In the further course of the race, I caught cars that had already made two stops. So, in the end, I had to settle for twelfth place.”

Miguel Molina (Audi RS 5 DTM), 14th place
“It was a tough race. The strategy was a bit risky but we were able to improve with it in the race. I started from position 22 and finished 14th. That’s not bad but not perfect. It’s great to see Audi winning here after eleven years. Sincere congratulations to Audi and ‘Eki.’ We’ve been expecting this success for a long time.”

Adrien Tambay (Audi ultra RS 5 DTM), 15th place
“My start and the first lap were good. When the safety car was deployed there was a bit of confusion. Our strategy didn’t work out in this situation. That’s why I had to run almost the whole race on standard tires. That wasn’t the right solution.”

Edoardo Mortara (Playboy Audi RS 5 DTM), retirement
“This is a disappointing result after a perfect weekend. After the collision with Gary (Paffett) three laps before the end we weren’t able to finish the race although we firmly had a podium finish in sight. On my part, this was no intention. Things are simply not running smoothly for us at the moment. But I’m positively looking ahead to the next race.”

Jamie Green (Red Bull Audi RS 5 DTM), retirement
“My race, unfortunately, was a flop. I’d been planning to stay clear of all trouble on the initial laps. I started on option tires. Although I was cautious I got into a sort of sandwich between two opponents in the first turn. When the safety car was deployed, we made two pit stops. Then I drove on standard tires. Grip wasn’t good enough. When I looked at the car after the race I discovered some obvious damage. That’s probably the reason why the tires no longer built up any grip.”

Timo Scheider (AUTO TEST Audi RS 5 DTM), retirement
“When I was building up brake pressure on my car before the start the brake pedal went all the way to the floor. So I didn’t even get to start, which is very frustrating. I later noticed brake fluid in the foot-well. I’m really caught in a string of misfortune.”

Hans-Jürgen Abt (Team Director Audi Sport Team Abt Sportsline): “Congratulations to Mattias Ekström on his birthday and on his brilliant race. He delivered a mega performance and the team is absolutely relieved to have won here after such a long time. ‘Thank you very’ much to everyone.”

Ernst Moser (Team Director Audi Sport Team Phoenix): “Congratulations to ‘Eki,’ Team Abt and Audi on having achieved the feat of being at the very top here again after eleven years. Recovering from 21st to fifth and to still be leader of the standings on top of that wasn’t to be expected after qualifying. That’s why we’re overjoyed. Miguel had speed in the beginning but didn’t manage to save his tires. It’s a shame that he didn’t finish in the points. Mike Rockenfeller did a better job of this but in the end was battling with dull weapons as well.”

Arno Zensen (Team Director Audi Sport Team Rosberg): “Actually, the weekend had been wonderful for us up to the last three laps. Edo (Mortara) drove a great race. We were struggling with the gap to Gary (Paffett). When we thought that he was on a par with Gary we called him into the pits, unfortunately, the stop wasn’t good. That’s why Edo got behind Gary and thus this unfortunate incident happened. It’s a shame because a lot more would really have been possible today. Filipe (Albuquerque) had a poor start and dropped far behind the safety car. We’ve still got to analyze this. Unfortunately, it again wasn’t our weekend.”