Quotes after the race at the Lausitzring 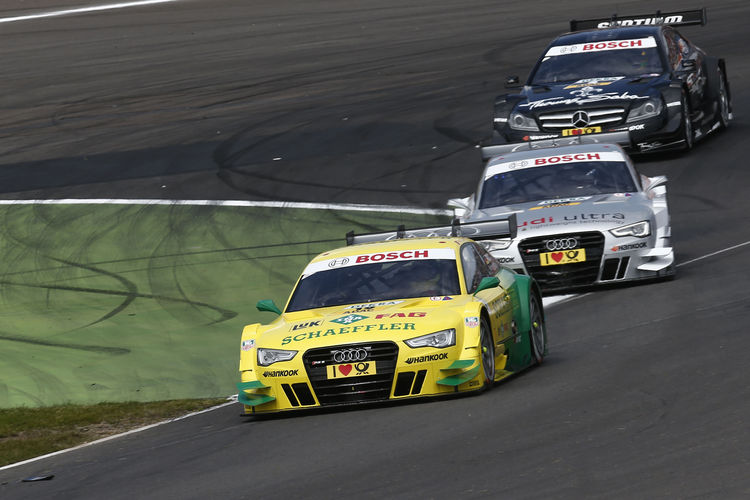 By finishing the race at the Lausitzring in second place Audi driver Mike Rockenfeller took the lead in the DTM. Quotes after the DTM race at Lausitz.

Dr. Wolfgang Ullrich (Head of Audi Motorsport): “Mike (Rockenfeller) drove a strong and clever race today – that’s the way to clinch titles in the DTM. That he’s leading the standings now after four races says something for ‘Rocky’ as well as for our Audi RS 5 DTM, which has been fast on all tracks so far. Now, the next two major tasks are coming up for us: Le Mans and then our DTM home round at the Norisring where we’ve still got some unfinished business.”

Dieter Gass (Head of DTM): “Obviously, Mike Rockenfeller’s second place is superb. We discussed with him at length how to strategically put him in the best position because we were concerned about the three Mercedes cars at the front. In the end, we chose the best option. That we put Mike on podium in second place – as he of course did through his performance as well – is a good result.”

Mike Rockenfeller (Schaeffler Audi RS 5 DTM), 2nd place
“It was a very good race. Starting from position six, we squeezed out the maximum. I even came close to being able to battle for victory but, in all fairness, you’ve got to admit that Gary (Paffett) was simply faster in the end. ‘Thank you’ to my team. It was a clean race and we were quick. We’ve still got to improve some more, though: There are some tracks coming up, particularly the next one, where we haven’t been so strong up to now. But we’re aiming and – have to – achieve the maximum there as well.”

Jamie Green (Red Bull Audi RS 5 DTM), 5th place
“Dropping from third place to fifth was a bit disappointing. But I believe that I drove a good race. I had a good start and was closely following (Christian) Vietoris. But we both lost ground to Mike Rockenfeller. At the end of my first stint, I lost a lot of time when the option tires heavily degraded.”

Mattias Ekström (Red Bull Audi RS 5 DTM), 8th place
“It was nice to drive a good race. But qualifying remains the key. Unfortunately, there’s not a lot you can do from position 18 on the grid. At least, I was able to make up a large number of places. A lot more than that wasn’t possible today.”

Edoardo Mortara (Playboy Audi RS 5 DTM), 9th place
“It was a difficult race for me. I’ve scored my first points, but I’m a bit disappointed about ninth place. We were very competitive last year and won two races. And now I’ve got to battle a lot. I’m hoping for things to improve in the coming races.”

Adrien Tambay (Audi ultra RS 5 DTM), 11th place
“The start was good. I was out of the DRS zone and that’s why it was hard to catch up with ‘Rocky’. My car was okay. Maybe we pitted a bit too late and thus lost a few positions. However, I think that the way some drivers overtake is a bit sketchy – after all, we’re not driving stock car races.”

Miguel Molina (Audi RS 5 DTM), 16th place
“We started with a different strategy than the others. In the first turn, I lost a few positions. In the beginning, I had a good pace, but the last stint wasn’t good: My tires were degrading and I wasn’t able to battle anymore. But I believe we’re working in the right direction and are going to achieve a good result soon.”

Timo Scheider (AUTO TEST Audi RS 5 DTM), 20th place
“Everything went well at the start. The strategy of initially running on standard tires and to quickly switch to option tires was good. Starting from the rear, we had to take this risk. But then the option tires degraded too heavily and we lost up to three seconds per lap. We had to make a third pit stop. Now we’ve got to analyze why we had such heavy wear.”

Hans-Jürgen Abt (Team Director Audi Sport Team Abt Sportsline): “As a team, we can be pleased with Jamie (Green) in fifth place and Mattias (Ekström) in eighth. We squeezed out the maximum. All pit stops worked well. Now we’ve got to try and continue to improve our performance and to be in a good position for the Norisring.”

Ernst Moser (Team Director Audi Sport Team Phoenix): “We selected the right strategy again. ‘Rocky’ had a superb speed but was slowed a bit by (Robert) Wickens. After he had overtaken him, victory would have been possible but at the end of the stint on the option tires he had vibrations and we called him into the pits. Otherwise, he’d have passed (Gary Paffett). We had superb pit stops and showed that we’re in contention at the very front. Miguel (Molina) started on option tires. Unfortunately, he got entangled in a starting accident and dropped to the far rear again. For that, this strategy wasn’t right.”

Arno Zensen (Team Director Audi Sport Team Rosberg): “Congratulations to ‘Rocky,’ he drove a great race. He’s on a roll this season and hopefully it’ll continue like this. In Filipe’s (Albuquerque) case, we took a gamble on the strategy but it backfired on us. In the end, the tires lost performance. In the case of Edo (Mortara), the strategy and the speed were okay; we’re happy about the first points. Edo drove a good race. We just had to call him into the pits a bit earlier than planned because he was encountering traffic.”