Quotes after the race at Silverstone 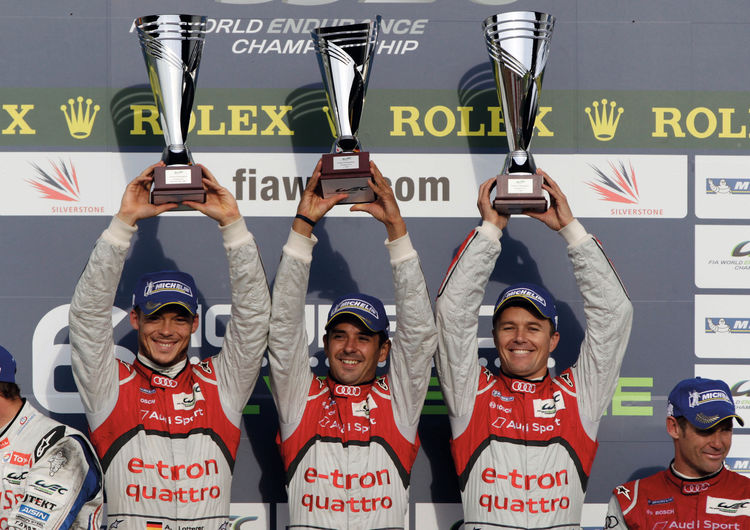 Audi celebrated the fourth victory of the season in the FIA World Endurance Championship (WEC) at Silverstone.

Dieter Gass (Head of Racing Commitments): “An excellent result after an incredibly difficult race. From start to finish, there was an intensive battle with Toyota who were very strong. We mainly won the race due to the efficiency of our technology. So we were able to clinch victory in the race with the help of our strategy. The stop-and-go penalty for car number 1 was unfortunate because the contact between the GT car that pulled to the right and our R18 e-tron quattro that slightly drove toward the left could also have been viewed as a normal racing accident.”

Ralf Jüttner (Technical Director Audi Sport Team Joest): “That was a very interesting race. Toyota was even a bit faster than I’d been expecting. It was an intensive battle that pushed us to the limits. Our car number 1 also had that bit of luck which you simply need in racing, while number 2 suffered quite a bit of misfortune. All drivers drove brilliantly and left the cars undamaged. We saw a great fight for six hours straight. For us, too, it was nerve-wracking. ‘Thank you’ to the drivers and to our team for making it possible for us to continue our string of victories.”

Marcel Fässler (Audi R18 e-tron quattro #1): “This was a fantastic victory that wasn’t so easy. I’m extremely happy because this is my first victory in a 6-hour race. I had the lead twice before at Silverstone, and now – finally – we managed to clinch victory. Toyota was a very powerful challenger. Our squad did a perfect job at the stops and was really quick. Simply brilliant!”

André Lotterer (Audi R18 e-tron quattro #1): "A fantastic day! Audi has pocketed the title and my two team-mates and I are leading the drivers’ standings. This was a nearly flawless race. There was only a stop-and-go penalty for Ben (Tréluyer) after which the situation became pretty tight. But since there was another safety car period we were spared from a brief refueling stop at the end. The car was running perfectly. It was a great weekend that I’m really happy with. I’m already looking forward to Brazil.”

Benoît Tréluyer (Audi R18 e-tron quattro #1): “I’m very pleased. I’ve never won a 6-hour race before. This was the next nice victory for the Audi R18 e-tron quattro. The team did an outstanding job. But our race was pretty strenuous due to the nice battle with Toyota. This makes the result even sweeter.”

Tom Kristensen (Audi R18 ultra #2): “Congratulations to Audi and to our sister car on having clinched victory. We were initially trying to save fuel to prevent having to come in for a last short refueling stop at the end of the race. But then, unfortunately, a few things interfered with our plan. Due to the safety car periods the other cars used less fuel as well. Unfortunately, Allan had to pit due to a puncture. We managed a nice recovery. Naturally, third place is not a dream result. It could have turned into a clearly much closer battle of our car with Toyota.”

Allan McNish (Audi R18 ultra #2): “The strategy played a major role today. Our car was very quick. But we also knew how to save fuel. So, theoretically, we would have had to have one pit stop less than our rivals. Unfortunately, a puncture deprived us of our chance. The safety car didn’t help us with our strategy either. And so, in the end, we finished in third place.”