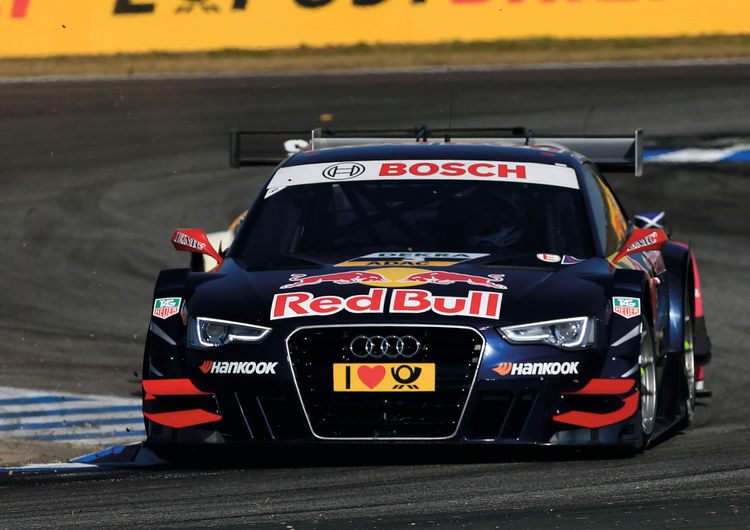 Four Audi drivers scored points in the DTM race at Oschersleben. Quotes after the race.

Dr. Wolfgang Ullrich (Head of Audi Motorsport): “For us, after turn one, every chance of being among the front runners was unfortunately gone. Mattias (Ekström) stopped at the start. Edo (Mortara) and Miguel (Molina) had problems in turn one. That took away the chance of moving forward. In ‘Rocky’s’ car the speed we’d been hoping for was lacking a bit. We’ve got to look ahead now and do a better job of putting the results of our work on track.”

Mike Rockenfeller (Schaeffler Audi A5 DTM), 6th place
“6th place is definitely not what I’d been hoping for. But after qualifying, we knew that it would be a difficult race. I had a clean start and lost a bit of ground when ‘Eki’ stopped in front of me. I got through turn one without any problems but unfortunately didn’t have the pace for a forward attack.”

Mattias Ekström (Red Bull Audi A5 DTM), 8th place
“A catastrophic race: I had a bad first lap – the rest was very good.”

Timo Scheider (AUTO TEST Audi A5 DTM), 10th place
“I’d been hoping for more. But the race started with a moment of shock right away when Mattias (Ekström) stalled the engine and I intuitively had the right reaction at the last moment. In turn one, my choice of the side had been right but I was pushed toward the outside. That caused me to lose all the positions I’d won. The pace then was okay. The first pit stop was good because I gained a position. At the second pit stop, I lost a few places.”

Filipe Albuquerque (TV Movie Audi A5 DTM), 9th place
“From position 14, the race is very difficult. I made it through the first lap without any problems but later lost some time behind Martin (Tomczyk). At the end of the race, Mattias Ekström was quicker. More than ninth place wasn’t possible. A position in the top ten was my goal and I achieved it.”

Miguel Molina (Red Bull Audi A5 DTM), 15th place
“The start was very good but in turn one I was hit by Wickens and suffered a puncture as a result. Afterwards, my race was compromised. My car was very good but when you’re running in the last position you no longer drive one hundred per cent. The next race will be my home round at Valencia for which I’m extremely motivated.”

Adrien Tambay (Audi ultra A5 DTM), 16th place
“Ten minutes before the start we had a problem with the car and weren’t able to start from the grid. We started from the pit lane and I looked at this run as a test. Our pace was good but in the end we had another problem and had to stop earlier. We made the best of the situation and are now looking toward Valencia.”

Rahel Frey (E-POSTBRIEF Audi A5 DTM), retirement
“Obviously, I’m not happy. I had two superb races before, and qualifying went well for me. That’s why I was optimistic here at Oschersleben. Unfortunately, I botched turn one. Once you’re at the far rear of the field there’s an incredible amount of action. I wanted to pass Susie (Wolff) and attacked. Unfortunately, I damaged the car in the process and retired at an early stage.”

Edoardo Mortara (Playboy Audi A5 DTM), retirement
“It was disappointing for us; we could have scored points. But my start wasn’t good and unfortunately I had contact with Ralf Schumacher on lap one. That’s very typical in Oschersleben. There are two more race weekends coming up – anything’s possible for me there.”

Hans-Jürgen Abt (Team Director Audi Sport Team Abt Sportsline): “Racing luck wasn’t on our side when Mattias Ekström’s engine stalled. In retrospect, that was a real shame because the pace was right and Mattias recovered a lot of places. But he was no longer able to join the battle for the podium. Things like this happen in motorsport, though, and we won’t lose our motivation because of this.”

Ernst Moser (Team Director Audi Sport Team Phoenix): “Unfortunately, we saw all of the front Audi cars far at the rear in turn one. That was a real shame. Mike Rockenfeller got off lightly and managed to work his way around Mattias (Ekström). We came out of turn one in sixth place, didn’t have the speed to attack and then just sustained this position. What a shame! Miguel (Molina) had a superb start but suffered a puncture due to body contact with another car right on the first lap. We had to change the left rear tire. After that, he was driving his own race.”