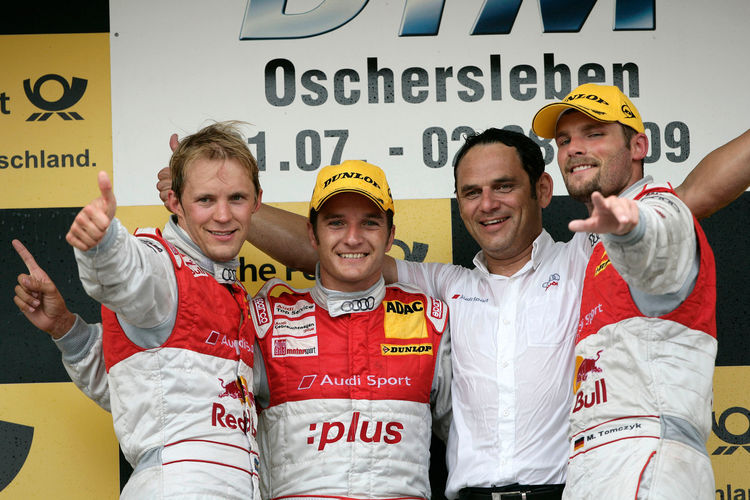 Audi achieved a commanding 1-2-3 exploit at the Motorsport Arena Oschersleben and the 50th victory of the brand in the DTM. Quotes after the race.

Dr. Wolfgang Ullrich (Head of Audi Motorsport)
“An almost perfect day for Audi because, unfortunately, Tom (Kristensen) starting from the pole position didn’t manage clinching the top result that would have been possible. He definitely would have had the right performance today because, despite his drive-through penalty, he finished in the points. Other than that, this was a really strong team performance today. Unfortunately, that was not true for the year-old cars, as all of them were struggling with handling. There were some things that happened which actually shouldn’t happen among team-mates. But all in all, we experienced a great weekend together with all Audi fans.”

Timo Scheider (GW:plus/Top Service Audi A4 DTM 2009 #1), 1st place
“I’m proud to have clinched the 50th victory in the DTM for Audi. Such an exploit feels even twice as good. The key today was clearly the start, in order to be in front in the first turns. Afterwards, it took a good strategy and two perfect stops which my guys from the team again pulled off in an outstanding manner – many thanks to them for that. Then, I was able to plan my race well and only had to respond to what my immediate rivals were doing.”

Mattias Ekström (Red Bull Audi A4 DTM 2009 #5), 2nd place
“It’s great to be heading the standings together with Gary (Paffett) halfway through the DTM season. We know each other well from the 2005 title fight, so the fans can definitely look forward to a thrilling second half of the season. There’s one thing I’m bound and determined to do in the next events coming up: to finally win my first round this year.”

Martin Tomczyk (Red Bull Cola Audi A4 DTM 2009 #6), 3rd place
“It’s a nice feeling to finally be standing on the podium again after such a long haul. The positions at Zandvoort or here at Oschersleben – that’s where I feel comfortable and that’s where I actually belong, I believe. As far as I’m concerned, things can continue like this: The Nürburgring and Brands Hatch coming up now are two circuits that suit me well.”

Tom Kristensen (100 Jahre Audi – A4 DTM 2009 #2), 8th place
“My Audi colleagues delivered a very good result and were all on the podium. I would have liked standing there as well. On the starting grid, I was a few centimeters too far toward the front, though, and I wasn’t able to see that. I must have lost concentration during radio communications. Then I received a penalty which, in my opinion, doesn’t quite fit the violation. I had to drive through the longest pit lane of the DTM. After that, I was running in the last position. That was too hard when you look at the history of penalties imposed against cars that were not standing exactly within the markings. The car was brilliant, as early as in qualifying and in the warm-up. In the race it was very good as well. It was nice to clinch a point and to overtake Jamie (Green). One point means that I can still manage to smile a little, which I wasn’t able to do during the whole race.”

Mike Rockenfeller (S line Audi A4 DTM 2008 #11), 13th place
“The start was super, and I was able to make up some places. In turn 3, a Mercedes was running alongside me and hit me in the side two or three times. I had to go into the grass and was only 14th. At first I was running behind my team-mates. Then we had good stops and a good strategy. In the end a point would almost have been possible. I was driving directly behind Alex (Prémat), who was fighting with Maro Engel. I wanted to get past him and at one point was almost alongside him. When he turned in, his wheels stopped. I still tried to brake. It was a classic racing accident. He turned in and I was running out of room. Unfortunately, we crashed. I feel sorry for Alex and Team Phoenix. We both fought hard. That went unrewarded in the end.”

Oliver Jarvis (Audi Cup A4 DTM 2008 #15), 15th place (puncture)
“I had a good start and a good first lap, but then I soon had to struggle a bit with oversteer. We had two quick pit stops. Toward the end of the race, the rear got out of control extremely. In the end I had to retire due to a puncture.”

Alexandre Prémat (Audi Bank A4 DTM 2008 #14), 16th place (accident)
“Basically, it was a pretty good race. In the end it was too bad that two brand colleagues got involved in an accident when we running in eighth and ninth place. ‘Rocky’ in 13th ultimately finished out of the points too. That’s bad for the team and also for me because I wanted to score points. Congratulations to Audi Sport on the overall result.”

Katherine Legge (Audi Collection A4 DTM 2008 # 21), 17th place (accident)
“Actually, my start was very good but in the commotion of the first turns I lost the field again. After four or five laps I started having braking problems. The brake force distribution kept changing all the time. In the end, my wheels locked and I slid into the grass. Unfortunately, that was not a good race.”

Markus Winkelhock (Playboy Audi A4 DTM 2008 #12), retirement (puncture)
“My start was fair to middling. I lost a position to Ralf Schumacher, but won a place again because ‘Rocky’ had to go into the grass at the end of the second turn, so I was able to pass him. The car’s balance was worse than in warm-up, the car had heavy oversteer. Unfortunately, I then had a puncture on the right rear tire, the same thing that happened to Oliver Jarvis, too, toward the end of the race. I parked the car because I didn’t want to take any risk.”

Hans-Jürgen Abt (Team Director Audi Sport Team Abt Sportsline)
“I think that was a great response to the race at Zandvoort. The team did an outstanding job. ‘Well done’ to all of them. Everything went perfectly. We can only be proud, coming back like this and showing our rivals with such dominance that they’ve got to contend with us again. I hope of course that things will continue like this.”

Ernst Moser (Team Director Audi Sport Team Phoenix)
“Oliver (Jarvis) got off the grid perfectly and maintained his position, Alex (Prémat) just lost one place but was able to make up some ground again in the first two turns. We tried keeping Mercedes at bay by pitting early. We didn’t manage to do that because Di Resta’s and Paffett’s speed was simply too high. That’s too bad because we wanted to score lots of points for Audi. We were just able to keep up with Spengler but he drove Oliver into making a mistake and overtook him. Of course it’s a shame to lose both cars three laps before the end. I’d have liked grabbing at least these two points. Now our cars will be five kilograms lighter again for the Nürburgring and we continue to be highly motivated.”

Arno Zensen (Team Director Audi Sport Team Rosberg)
“It’s too bad that ‘Rocky’ was barged off a bit in the beginning and lost a lot of places. The pace was there, as we could see later. He drove a good race. It’s a shame that the incident happened with Alex (Prémat), who had slid several times before. Half a meter more of space and it might have worked out and we’d have still scored one point. Markus (Winkelhock) had a puncture.”