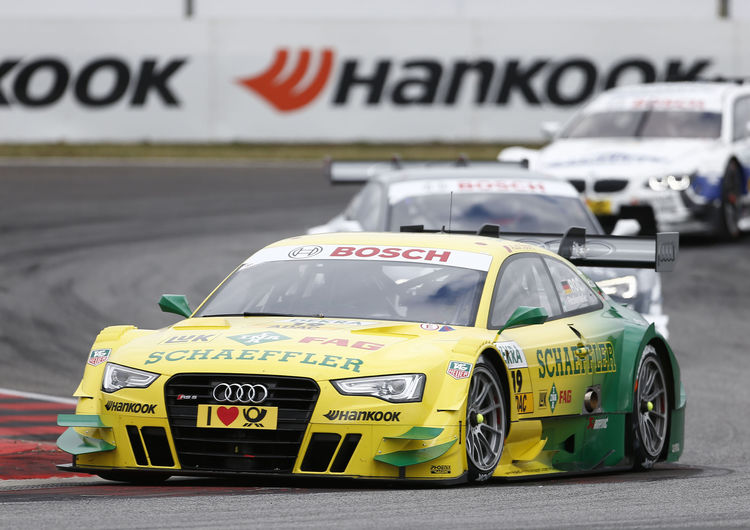 Two podium places by Mike Rockenfeller and Jamie Green at Oschersleben plus all eight Audi cars in the top ten. Quotes from the Audi camp after an exceptional DTM race.

Dr. Wolfgang Ullrich (Head of Audi Motorsport): “Being able to congratulate all your drivers after a race is not a common occurrence in the DTM. Today it’s been the case. Ever since we’ve been battling against BMW and Mercedes-Benz in the DTM no manufacturer has managed to score points with eight cars. And it’s been a very, very long time that a brand has had eight cars in the top ten in a DTM race. We managed to do this today at Oschersleben – and everybody at Audi Sport and in the three teams can be proud of this.”

Dieter Gass (Head of DTM): “A fantastic result for us to finish in the points with all eight Audi cars. This has never happened before since we’ve been racing in the DTM with three manufacturers – and as a manufacturer you can only dream of this. Mike (Rockenfeller) delivered a perfect performance yet again. Furthermore, we showed the type of team cohesion we’ve always been wishing for.”

Mike Rockenfeller (Schaeffler Audi RS 5 DTM), 2nd place
Tires: Standard/Option/Standard
“The second place feels good. For a brief moment, I was thinking that I might be able to win. But it soon became obvious that Augusto (Farfus) was a bit stronger than we. That’s why I took it easy on the car and brought second place home. These were important points for the Championship again. A podium in the DTM can’t be taken for granted. That’s why I’m enjoying the fact that I’ve received a trophy here at Oschersleben.”

Jamie Green (Red Bull Audi RS 5 DTM), 3rd place
Tires: Option/Standard/Standard
“It’s great to be standing on the podium for the first time in my new Audi racing suit. It’s nice to have accomplished this. Surely, I should be able to do better than take third place. I’m happy about my improvement. My speed in the race was really good. If we take that with us into the next races we’ll have the possibility to win.”

Filipe Albuquerque (Audi Financial Services RS 5 DTM), 4th place
Tires: Standard/Option/Standard
“I had a good start and a good speed in the race. Our second pit stop wasn’t perfect but I had a good advantage. In the end, I had a small problem with the brakes and lost a lot of time. But I’ve finally scored my first points of the season.”

Timo Scheider (AUTO TEST Audi RS 5 DTM), 5th place
Tires: Standard/Option/Standard
“Finally, a nice race again! I had a good car and two good pit stops. Unfortunately, I lost a lot of time behind Dirk Werner, who was arguably supposed to cover Bruno Spengler. We probably missed out on a position that way. But after the misfortune of the past I can live very well with this result– I fought hard for it. A dream result for Audi: Eight Audi cars in the top ten, we can be very happy today.”

Mattias Ekström (Red Bull Audi RS 5 DTM), 7th place
Tires: Standard/Standard/Option
“It was sheer entertainment. If you start from 13th place and finish in seventh that’s okay. More wasn’t possible. We can still be pleased with today after things hadn’t been going so well in qualifying yesterday.”

Miguel Molina (Audi RS 5 DTM), 8th place
Tires: Option/Standard/Standard
“For me and Audi it was a great race. I had a first good stint on option tires. But in the second stint on standard tires I was lacking grip. We’ve had two good races now; that’s positive for the last two rounds in the Championship.”

Adrien Tambay (Audi ultra RS 5 DTM), 9th place
Tires: Option/Standard/Standard
“I had another good start and good initial laps and was able to overtake Miguel (Molina) and Dirk Werner. I was happy with that. Afterward, I was struggling a bit with the car. It was difficult to drive. We’ve scored a few points again – for the third consecutive time. We’d like to continue like this.”

Edoardo Mortara (Playboy Audi RS 5 DTM), 10th place
Tires: Standard/Option/Standard
“It was a strenuous race. My start wasn’t perfect. We had a small problem with the clutch. The race rhythm and our pace were very good. I was fast on the option tires and scored a point today. Considering that I started from position 17 and was the last car in turn one, things didn’t go too badly. I’m hoping for an upward trend now. The speed is there and we now need a weekend without major problems.”

Hans-Jürgen Abt (Team Director Audi Sport Team Abt Sportsline): “It’s been a great day for Audi. All cars in the points: that shows perfect teamwork. The race offered a lot of suspense and fantastic overtaking maneuvers: A nice race Sunday.”

Ernst Moser (Team Director Audi Sport Team Phoenix): “A superb result for Audi! When you score with all eight cars that started you can only congratulate everyone who’s had a part in this, particularly considering the difficult time we had here last year. I’m very pleased with positions two and eight by ‘Rocky’ (Mike Rockenfeller) and Miguel Molina as well. Continuing where you left off after a four-week break sends a strong signal to the rivals. ‘Rocky’ has now got a 33-point advantage in the standings and Miguel, too, has added points to his tally, for himself and the team. In the team standings we’re in second place now, and we’re going to continue to attack there as well.”

Arno Zensen (Team Director Audi Sport Team Rosberg): “A great race for Audi with eight cars in the top ten. I’m happy for my whole squad that did a superb job. The strategy was right as well. Filipe (Albuquerque) just barely missed a podium finish and if Edo (Mortara) wouldn’t have had to start so far from the rear more than tenth place would have been possible for him too because he was as fast as the subsequent winner some of the time. ‘Thank you’ to everybody.”