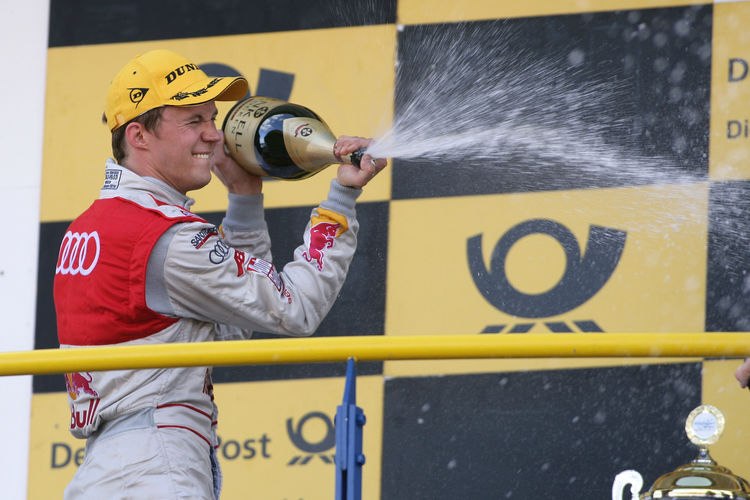 Mattias Ekström maintained his chances for the DTM title with a third-place finish at Oschersleben. Timo Scheider lost a possible victory due to a puncture. Quotes after the DTM race at Oschersleben.

Dr. Wolfgang Ullrich (Head of Audi Motorsport)
“Victory was within our reach today. This is particularly painful because our performance and our strategy were really good. Then the decision came as a result of something that’s beyond one’s control. For Timo (Scheider) it is particularly disappointing because the fight for the championship is over for him. ‘Eki’ at least still has a theoretical chance. The performance curve of our guys and the team has clearly improved in the past few races. We want to finally convert this into a victory now. I continue to be convinced that if we manage one win we’ll have a very good chance of managing two wins as well.”

Mattias Ekström (Red Bull Audi A4 DTM #5), 3rd place
“The race was quite okay, but that was all. The start was great. In turn one the situation in front of me was a little wild but then it calmed down. I soon realized that I wasn’t quick enough for victory. I drove as fast as possible and wanted to bring the car home safely. In the end that was good enough for third place. That’s okay considering that it simply wasn’t a fantastic day.”

Mike Rockenfeller (S line Audi A4 DTM #10), 5th place
“I had a very good start and was on the outside. The two Mercedes braked very late and were battling a bit with each other. As a result, I wasn’t able to get in on the inside and remained in third place. Afterwards there was some noise and some smoke developing in my car. That distracted me so much that Timo (Scheider) and ‘Eki’ got past me. I was struggling with the car for the remainder of the race and was only hoping for it to stay intact. In the end I was happy to have finished in fifth place.”

Alexandre Prémat (TV Movie Audi A4 DTM #9), 6th place
“That was an incredible race. I started from position twelve. After a short time I was ninth and overtook Martin Tomczyk a short time later. The strategy was superb. Of course it’s always great to score points. As I said after Brands Hatch, this has been my goal in several races. Now we’ve got three more points. The team showed a fantastic performance despite the fact that the qualifying didn’t go so well. I’m pleased for ‘Rocky,’ the team and for me.”

Martin Tomczyk (Red Bull Cola Audi A4 DTM #6), 8th place
“My start worked out very well. Then the situation became a little tight in turn one and Mattias (Ekström) overtook me. Afterwards, I was struggling with the car. Two or three times my tires picked up rubber from the track. My car wasn’t good to drive. Then Gary (Paffett) came and touched me pretty hard the first time. A lot of the rear aerodynamics components were lost in the process. After this incident the balance of my car was really poor. Then there was another fierce battle with Gary, but this second duel was okay. My car, however, really wasn’t good to drive any more. So all I could do was to go with the flow.”

Timo Scheider (GW:plus/Top Service Audi A4 DTM #1), 11th place
“That was extremely disappointing. I had a very good start. Afterwards the field became extremely slow and in the traffic jam I felt an impact at the right rear. The lower right rear wing structure was missing, but my performance continued to be pretty good. The strategy and the lap times were outstanding afterwards. Suddenly I realized that I was able to move forward to second place and even to first. The strategy and the pit stops helped perfectly. But at some point in time I noticed that my balance was starting to deteriorate. Something was wrong at the right rear of the car when turning in. I started feeling a little uneasy. Two laps later my feeling was confirmed: the tire was losing air and ultimately blew.”

Oliver Jarvis (Tabac Original Audi A4 DTM #2), 13th place
“I had a good start but was very cautious in turn one. There were many incidents of body contact and I lost some places. In turn three Gary (Paffett) attacked me pretty aggressively on the inside. We touched each other and he pushed me into Miguel (Molina). Afterwards the car was simply not quick enough any more. We’ve got to analyze why I had such heavy understeer.”

Katherine Legge (Glamour Audi A4 DTM #15), retirement (abandonment)
“I had a minor accident with David (Coulthard), which ended my race. The damage to my car was simply too heavy to continue to drive. The team found that the suspension had been damaged. I didn’t want to take the risk of an excursion that would have made things even worse. That’s a real shame because in the first third of the race our pace was pretty good and I had stayed clear of all trouble.”

Markus Winkelhock (Playboy/GW:plus Audi A4 DTM #14), retirement (accident)
“My start was superb. I was able to drive right through the cars on the row in front of me. I got through the first two or three turns pretty well too. As a result, I immediately advanced from 13th on the grid to ninth place. But unfortunately I made a mistake. I’ve got only myself to blame for that. I drove over the kerbs too hard. My car set off so extremely in the process that I immediately spun. I’ve suffered misfortunes four times in a row. On the fifth trial I had the chance of achieving a good result and made a mistake myself.”

Miguel Molina (Audi Bank A4 DTM #18), retirement (accident)
“The race had started pretty well but then I felt an impact and found myself in the gravel trap. We need to analyze the situation in detail before drawing any conclusions. I want to finish every race and continue to learn in my debut season. Unfortunately, today I didn’t have a chance to do that here. This makes it even more important for me to finish all the other races. I’m hoping to be moving forward again then.”

Hans-Jürgen Abt (Team Director Audi Sport Team Abt Sportsline)
“The team did an incredibly good job and put a first-rate strategy into action. In the end, the ‘racing god’ didn’t support us and Timo (Scheider). That’s a real shame in a phase where we’re showing that we can be at the very front. We almost had a narrow chance for victory. I feel very sorry for Timo. We’ve got to close the book on it now and perfectly prepare ourselves again for the next races.’”

Ernst Moser (Team Director Audi Sport Team Phoenix)
“It’s nice for us to have both cars in the points. We expected ‘Rocky’ to finish in the points after starting from third on the grid. It’s especially nice to see Alex (Prémat) having advanced from twelfth place to sixth. A superb team result. We performed three really good stops. A huge compliment to the squad. In the race our pace wasn’t good enough to move forward to the very front, so we simply had to give in. We’re very pleased with the team result.”

Arno Zensen (Team Director Audi Sport Team Rosberg)
“Our race had begun positively with a good start by Markus (Winkelhock). As early as on lap one, he was in ninth place. Unfortunately he then lost the car in the chicane. That ended his race. Katherine (Legge) made a small mistake after the stop at the pit lane exit. She collided with David Coulthard although he was more at fault in the incident. Obviously it’s sad that both of our cars were parked in the garage long before the race ended. Whenever you think that things couldn’t get any worse, they will get worse.”