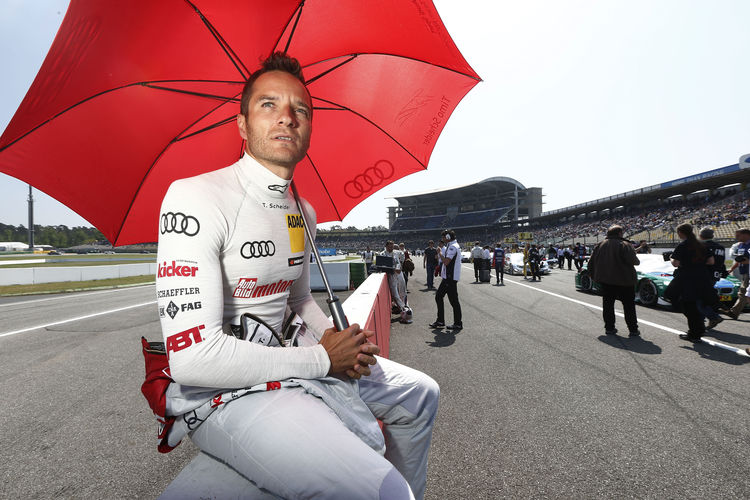 A delayed initial pit stop deprived Audi driver Timo Scheider of the chance to clinch a podium result in the DTM opener at the Hockenheimring. Quotes after the race.

Dr. Wolfgang Ullrich (Head of Audi Motorsport): “The fans experienced a really thrilling DTM season opener. The new DRS wing flap and the option tires produced the desired effect. We saw a wide variety of strategies, tough duels and brilliant overtaking maneuvers. All three manufacturers are close together. Obviously, the race didn’t go the way we’d have liked it to. We want to change that at Brands Hatch in two weeks from now.”

Dieter Gass (Head of DTM): “That was a disappointing season opener for Audi. None of our cars made it without any incidents. Particularly frustrating – and a shame – was the fact that we didn’t call Timo (Scheider) into the pits right on the first lap of the safety car, which deprived him of a possible podium finish. That he was able to recover from 18th all the way to sixth place by achieving strong lap times shows that more would have been possible today.”

Timo Scheider (AUTO TEST Audi RS 5 DTM), 6th place
“I had a good start. Due to the tire situation Augusto (Farfus) and I were in agreement: We were going to use the opportunity to drive away from the field. When the DRS was active he overtook me. Afterward, I wanted to use the DRS but then the safety car period came and we didn’t make the right decision in terms of timing the pit stop. Decisions like these are made within fractions of a second. We could have probably clinched a podium or victory today. When you look at how good our speed was toward the end that’s pretty painful.”

Mike Rockenfeller (Schaeffler Audi RS 5 DTM), 8th place
“Qualifying was our problem this weekend because we were simply too far at the rear. In the race, we didn’t get too many things wrong, except for the second pit stop at which we lost two seconds because something was jammed. Then I got stuck behind a brand colleague while I was in a battle with Bruno Spengler. Without these two minor incidents fifth place might have been possible but this way I finished in eighth place. On the one hand, that’s a bit disappointing but when you finish in the points after starting from position 14 in a race with so many question marks, that’s good damage containment.”

Jamie Green (Red Bull Audi RS 5 DTM), 14th place
“A tough race. My speed was okay, but not very strong. My main problem was that I was given a lap time penalty toward the end of the race and was to reduce my speed. But I couldn’t judge how fast I was and braked. My engineer said that it wasn’t enough so I had to brake again on the next lap. Later, I received a drive-through penalty. That’s a shame! Only because I once ran wider in turn one, which surely didn’t give me any advantage, I lost 35 seconds.”

Miguel Molina (Audi RS 5 DTM), 15th
“After the puncture right at the beginning of the race I had a good pace. We were able to make good use of the option tires and in the end were fast on the standard tires as well. I’m looking forward to Brands Hatch. I really like this track and am optimistic.”

Filipe Albuquerque (Audi Financial Services RS 5 DTM), 16th place
“It was a crazy race. At my first pit stop, the button for the pit lane speed limiter didn’t work and I was too fast. That’s why I received a drive-through penalty. Afterward, things were going well. I subsequently received another penalty out of the blue because I was sure that I didn’t drive over the line in turn one. Unfortunately, it was a race to forget.”

Mattias Ekström (Red Bull Audi RS 5 DTM), retirement
“That wasn’t a perfect start of the season. At the beginning, it wasn’t easy on standard tires. When I lost the hood the car became even more difficult to drive. When something broke on the driveline and I had no more propulsion I was forced to give up.”

Edoardo Mortara (Playboy Audi RS 5 DTM), retirement
“For us, it was a difficult race weekend. Now we’re hoping for Brands Hatch. Things can only get better.”

Adrien Tambay (Audi ultra RS 5 DTM), retirement
“It was another short race at Hockenheim. At the start, the handbrake didn’t work. I jump-started and received a penalty. I later noticed that there was a loss in engine power and then the car caught on fire. We don’t know the reason yet, we’ve still got to look into this. Hopefully, we’ll be more fortunate the next time.”

Hans-Jürgen Abt (Team Director Audi Sport Team Abt Sportsline): “It was a very turbulent race with many position battles. We’re sorry about not having called Timo (Scheider) in for a pit stop during the safety car period. But the communication took too much time, that’s why he lost about 20 seconds. Still, we saw that we’ve got a good pace, especially with Timo’s car and we need to build on this.”

Ernst Moser (Team Director Audi Sport Team Phoenix): “As expected, it was a turbulent race. The new rules made for a lot of action. We’re very pleased with Mike (Rockenfeller). He advanced from 14th place to position eight. If our pit stop had been optimal fourth or fifth place would have been possible. Miguel (Molina) suffered the misfortune of destroying an option tire on the starting lap. As a result, he had to contest the whole race on standard tires. He drove a superb race on them and had a good speed.”

Arno Zensen (Team Director Audi Sport Team Rosberg): “Unfortunately, this wasn’t our weekend. After the start, Edo (Mortara) had body contact and damaged the front of his car. In addition, he was bumped in the rear so that his car was no longer drivable and we quit. Filipe (Albuquerque) had a good start and things were going well in terms of the strategy. We had an early pit stop and then the safety car came out, which was optimal. Filipe, unfortunately, was driving too fast in the pit lane and was penalized. Subsequently, there were two additional penalties.”