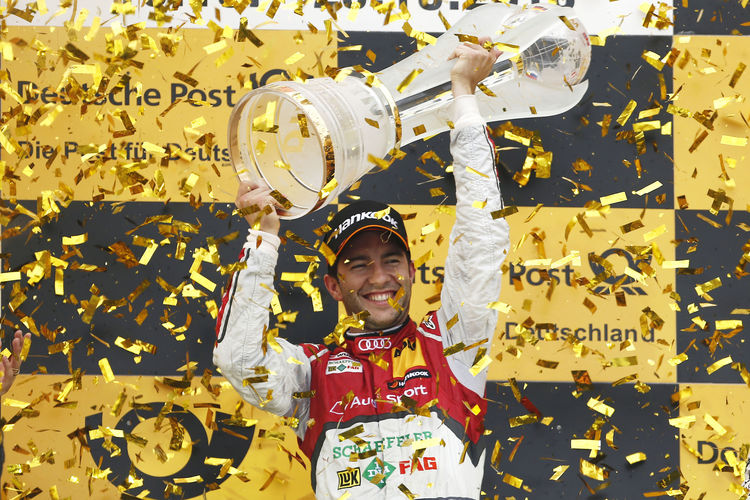 Dr. Wolfgang Ullrich (Head of Audi Motorsport): “That was a great conclusion of a thrilling and varied DTM season in which the fans got to see more duels and overtaking maneuvers than ever before. That despite the extremely bad weather and the fact that the Championship had been decided early such a large number of spectators traveled to the finale at Hockenheim clearly speaks in favor of the DTM. Congratulations to all who have helped bring the drivers’ and team classifications to Ingolstadt, Neckarsulm and Meuspath. Winning two of the three DTM titles after our difficult 2012 season is a fantastic achievement. With the triumph at Le Mans, the early win of the FIA World Endurance Championship (WEC) and the two titles in the DTM Audi has achieved another great motorsport season.”

Dieter Gass (Head of DTM): “At the end of the season, we’ve experienced a race of the kind that fans wish for – albeit not with a really perfect outcome for us. Unfortunately, Mattias (Ekström), and thus our best car in the battle for the podium, lost ground due to a collision. As far as Audi Sport Team Phoenix is concerned, I can only congratulate the squad on winning the team classification. In Mike’s (Rockenfeller) case, things didn’t go so well today. Instead, Miguel (Molina) filled the breach and delivered a fine race. Looking back, we can be very pleased with winning the drivers’ and the team titles. At the beginning of the year, that couldn’t necessarily be expected.”

Mattias Ekström (Red Bull Audi RS 5 DTM), 4th place
Tires: Rain/Rain/Rain
“4th place isn’t what I’d been hoping for when I was battling for victory. But in a way it reflects this season: I had a good race car but, in the end, wasn’t able to wrap things up often enough. Still, I’ve learned a lot.”

Miguel Molina (Audi RS 5 DTM), 5th place
Tires: Rain/Rain/Rain
“We scored good points for the team classification and finished in fifth place. In the beginning, the BMW cars were a bit faster than I. Afterward I found my rhythm and was able to overtake a few drivers. My car was very good today. It’s been a good day for the whole team. I’m hoping for the result to help me with a view toward the next season.”

Timo Scheider (AUTO TEST Audi RS 5 DTM), 12th place
Tires: Rain/Rain/Option
“I had a very good start but after the second turn was in the middle of the field so that there were a few incidents of body contact and I lost some positions. After that, things went well and with fast race laps we managed to battle our way forward and were running in sixth or seventh place. Shortly before the end, it was about the last tire change and the decision of what we would do. The team decided to switch to slicks and the option tire. That was the wrong decision. We were running five or six seconds slower and lost a lot of positions.”

Jamie Green (Red Bull Audi RS 5 DTM), 13th place
Tires: Rain/Rain/Rain
“It was a spectacular race. I had a very good start. On the first lap, I couldn’t see anything due to all the spray but I managed to stay clear of the biggest trouble. On the first stint, we had a very good performance. On a drying track, though, we lost a lot of time on rain tires. That’s the main reason why we didn’t finish the race in the points.”

Adrien Tambay (Audi ultra RS 5 DTM), 14th place
Tires: Rain/Rain/Rain
“At the beginning of the race, I was turned around. Something like that can happen in such circumstances. After that, my race was over. I was struggling with my first set of rain tires. My race performance improved the longer the rain lasted, which is why I was able to battle my way forward from the far rear to 14th place. On the whole, I can be pleased with my second half of the season.”

Edoardo Mortara (Playboy Audi RS 5 DTM), 15th place
Tires: Rain/Rain/Rain
“The race weekend reflects the way the whole season went. We stayed far below our potential. The start was successful but the strategy wasn’t right today. The second pit stop wasn’t optimal either, which is why we’re kissing the season goodbye with 15th place.”

Mike Rockenfeller (Schaeffler Audi RS 5 DTM), 16th place
Tires: Rain/Rain/Option
“The race was pretty poor. The start wasn’t good; we weren’t fast enough plus the wrong tire choice at the end. But we shouldn’t be sad: We’ve won the team classification – and of course the drivers’ Championship!”

Filipe Albuquerque (Audi Financial Services RS 5 DTM), retirement
Tires: Rain
“My early retirement in the race is really a shame. I had a good start although I almost couldn’t see anything due to the rain. Afterward, I had a few incidents of body contact which damaged one of the rear tires. When I braked in the subsequent turn I completely lost control of my RS 5.”

Hans-Jürgen Abt (Team Director Audi Sport Team Abt Sportsline): “It was a very turbulent race. It was obvious that anything was possible. Mattias (Ekström) was on course for victory and due to a spin was unable to intervene in the battle for the podium. Of course that’s a shame because he was one of the quickest men in the field. Unfortunately, this wasn’t quite the close of the season we’d imagined. Audi has won the team classification but the title in the manufacturers’ classification unfortunately didn’t completely work out. Next year, we’re going to attack again.”

Ernst Moser (Team Director Audi Sport Team Phoenix): “It was a highly thrilling season finale that we crowned by winning the team classification. I’m also happy for Miguel (Molina), who clinched the crucial points today. Now he was able to contribute his part to our great success as well. Now everything fits. Now we can celebrate.”

Arno Zensen (Team Director Audi Sport Team Rosberg): “Congratulations to Audi Sport Team Phoenix that, following the drivers’ Championship with ‘Rocky’ (Mike Rockenfeller), managed to win the team classification as well. In our case, the season ended exactly the way it began. Filipe Albuquerque’s race was over after lap one, the right rear wheel was crooked after an incident of body contact. Edo (Mortara) drove a good race. It’s possible, though, that, strategically, we made a mistake at the final pit stop. Otherwise he could have still scored a point. We’ve got to take a look at that again but if it should have been the case, then I’ve got to say, ‘Sorry Edo’.”