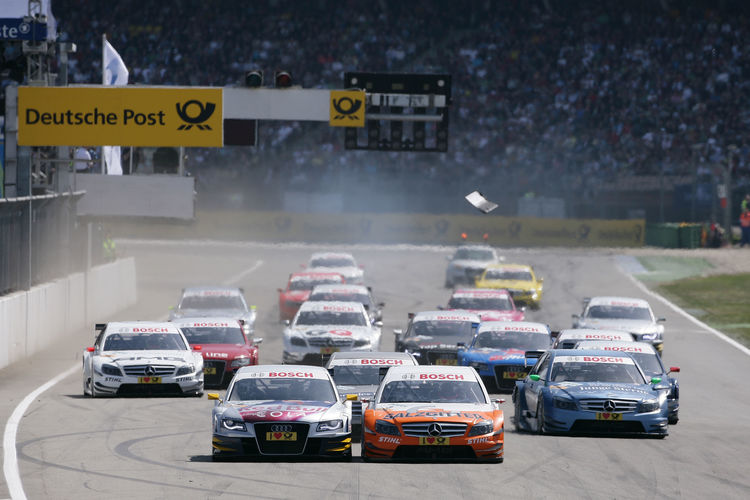 Mike Rockenfeller was the best Audi driver in the DTM season opener at the Hockenheimring. Quotes from the Audi camp after a turbulent race.

Dr. Wolfgang Ullrich (Head of Audi Motorsport)
“The result is disappointing for us because we had expected a lot more. Due to the technology freeze we know pretty well where we stand with our car. Our cars were very fast in the race. We also saw that we’ve got a good driver line-up because almost all of our drivers posted fast lap times. However, we have not managed to get the new tire generation to work on our cars so that it lasts as well. The punctures in the race really caught us by surprise, particularly in the case of Martin Tomczyk who had a very good long run in the warm-up. On his car we even reduced the camber for the race and increased the inflation pressure. In other words, we played it safe. We had tire problems on some cars today, but on others we didn’t, although all of them ran with very similar set-ups. We need to understand this issue first and solve it by the next race. There’s a lot of work to do before Valencia – despite the technology freeze.”

Mike Rockenfeller (S line Audi A4 DTM), 5th place
“For me, it was a turbulent race. I had a good start. Then I was sandwiched by Paul (Di Resta), who was defending his line. He pushed me against the wall, which caused me to lose a lot of positions. That was a shame because with this kind of a start I would already have been sixth. Instead I was in twelfth place after lap one and had to fight. The car was superb and the squad did a great job in my first race for Team Phoenix. For me, it’s been a good day.”

Mattias Ekström (Red Bull Audi A4 DTM #5), 6th place
“I had a perfect race – but only until my engineer Alex (Stehlig) told me that I had to come in for another pit stop. The stops themselves were good, the car was fantastic. The tires were at the limit, but still okay. Last year, one my tires blew on the penultimate lap; today I didn’t have a puncture but three pit stops. Last season, I fought my way back to the top of the standings during the course of the year. We’ll try that again this time too.”

Timo Scheider (GW:plus/Top Service Audi A4 DTM), 7th place
“A disappointing opener. And, what’s more, on a track where I finished the previous five races on the podium each time – as the winner or the runner-up. Our expectations for today had been completely different. I found myself struggling a lot because the rear axle was behaving in a very unfortunate way. I was neither able to attack nor defend myself in duels. That was definitely frustrating. But the bottom line is that there are two points for seventh place, which may still prove to be very important.”

Miguel Molina (Audi Bank A4 DTM), 8th place
“My first DTM race – this was a new and a particularly positive experience! I clinched a point right in the first race. I gave everything over the entire race distance and my pace was good. The car was fantastic. The second pit stop in particular was very good. I got in front of two cars. What more could I ask for? I’m very happy and now I’m gradually starting to like the Hockenheim circuit. I want to thank Audi and the whole team. We’ll be attacking again at Valencia.”

Alexandre Prémat (TV Movie Audi A4 DTM), 10th place
“Basically, the race was fantastic. Unfortunately, I wasn’t able to score points in the end because my left rear tire blew. That cost a lot of time. Without this incident a podium result would have been possible. My pace was really good. I was able to follow the race leader. I’m a little disappointed but at least we showed how fast we can be – in qualifying as well as in the race. And the team did a good job the whole weekend. Now I’m looking forward to Valencia, even though that’s still a month away. After the season opener my adrenaline has gone up to a nice, high level!”

Katherine Legge (Glamour Audi A4 DTM), 14th place
“From my grid position there wasn’t a whole lot I could do. For me, it was important to make it through the first lap without any problem. I took it easy in the first two turns. Later, I made up a few positions but lost them again in the commotion. I noticed that the practice time I was lacking made a difference. Consequently, the race was actually my first full session. After the first set of tires we had to slightly adjust the inflation pressure. On the second set, my brake balance was oriented a bit too much toward the front and the wheels sometimes locked. The third stint was okay. I’m happy to have finished the race without any incidents.”

Markus Winkelhock (Playboy/GW:plus Audi A4 DTM), 15th place
“My start was poor. I almost stalled the engine and had to use the clutch again. Then the wheels spun and three cars overtook me. That’s why I was so far at the rear of the field. Balance was fair to middling in the beginning but very good at the end. The car felt good at the end, my lap times were okay. Unfortunately, I lost one place to Miguel Molina in the pits. But due to the time penalty, ultimately, it didn’t matter any more.”

Martin Tomczyk (Red Bull Cola Audi A4 DTM #6), retirement (tires)
“Generally, I’d say the weekend was outstanding up to the twelfth race lap. But when it really mattered, I suffered a huge misfortune. We still don’t know what caused my puncture. Unfortunately, the tire blew in the last turn, so I still had to do a whole lap. That meant the end of my race. I’ve been racing in the DTM for ten years, and for ten years I’ve been driving exactly the same line at Hockenheim. I’ve never had any tire problems here before. And this year it happens not just once but twice. That’s very frustrating. I’m hoping that at least we’ve been able to gather the information we’ll be able to use in a positive way in the next race.”

Oliver Jarvis (Tabac Original Audi A4 DTM #2), retirement (collision)
“As early as on the first lap a Mercedes brushed me three times. On the second lap, in the hairpin, a rival ran into my car. The suspension broke in the incident. A very disappointing start into the season. Now we’ve got a lot of work to do. I’m hoping for a better result at Valencia.”

Hans-Jürgen Abt (Team Director Audi Sport Team Abt Sportsline)
“We’re very disappointed. Now we need to analyze exactly what happened today. Martin’s (Tomczyk) pace was right. He drove a superb race. We’ve got to look ahead. This was not the most accomplished opening round. The important thing is for us to sort the problems before the next race.”

Ernst Moser (Team Director Audi Sport Team Phoenix)
“The best Audi driver to cross the finish line was sitting in a car of Audi Sport Team Phoenix. An even better result would have been possible today; it’s a shame that we missed that chance. Still, we can be quite happy with the result. Well done’ to my squad and our two drivers. We’ve all gelled pretty quickly. That’s really enjoyable.”

Arno Zensen (Team Director Audi Sport Team Rosberg)
“Katherine (Legge) had a few peaks and valleys this weekend. In the race she delivered a decent performance and finished. Her times were attractive. I’m quite pleased. Markus (Winkelhock), too, drove a good race. But I’m very disappointed about the team’s performance. We didn’t read the regulations carefully enough. That’s why we called Markus into the pits too early. The regulations state that crossing the safety car line is the reference for the pit stop window, not the finish line. For this violation, he received a one-minute penalty and dropped to 14th place. This is a slip we simply mustn’t make.”