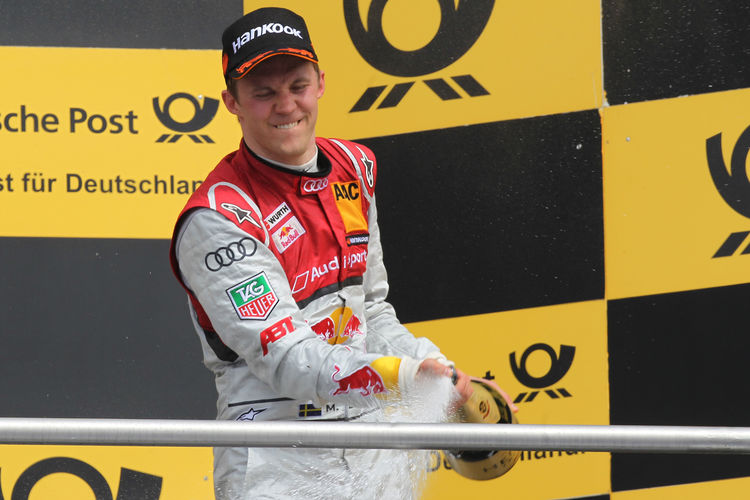 Mattias Ekström clinched a podium result at the DTM season opener at the Hockenheimring on the new Audi A5 DTM’s debut. Quotes from the Audi camp after the race at Hockenheim.

Dr. Wolfgang Ullrich (Head of Audi Motorsport): “On the whole, it was a fabulous start for the new DTM in front of a great crowd. All three manufacturers put all their cars on the grid under extreme time pressure. The cars functioned well and were very close together in terms of performance. It was nice that we were able to decide the new DTM’s first qualifying event with Mattias Ekström’s pole position. Naturally, we wanted to convert that into victory as well. Yet we were lacking the race performance to do so today. Now it’s our task to do everything we can so that we won’t be able to only show a perfect performance in qualifying but also in the race at the Lausitzring.”

Mattias Ekström (Red Bull Audi A5 DTM), 3rd place
“It’s always nice to be on podium. Our aim today was to be at the very top. Unfortunately, we only managed third place. ‘Well done’ to Mercedes and Gary (Paffett) and Jamie (Green), they were quicker today. We need to analyze what went wrong and then we’ll have a good chance of striking back.”

Mike Rockenfeller (Schaeffler Audi A5 DTM), 5th place
“The race was very strenuous, I had a good start. After that, I was struggling because we’d changed the brake beforehand and tire pressure was a bit low. I had to let (Gary) Paffett pass at the start. Then I was running on position five and drove a similar pace as Mattias Ekström. We had two good pit stops. At the end of the race I had to let Christian Vietoris pass. He was too quick for me and I wanted to score points today at all cost.”

Miguel Molina (Red Bull Audi A5 DTM), 9th place
“It was a good race for me. I started from a difficult position, 17th place, and scored points for ninth place nonetheless. That was positive. The team had a good strategy. My speed in the race was good and I scored two points. That was a good start into the season after qualifying had not gone so well.”

Filipe Albuquerque (TV Movie Audi A5 DTM), 10th place
“My start from position 14 was great. With all the incidents that happened I was fortunate. My speed was good. When the track was clear I was able to set good times. At the second pit stop I lost four positions. Then, in traffic, I was not able to overtake Ralf Schumacher and Miguel Molina. Sixth place would have been possible but at least there’s one point for tenth place.”

Edoardo Mortara (Playboy Audi A5 DTM), 11th place
“For me, it was a difficult race. I had a brilliant start and a good rhythm but unfortunately we weren’t able to overtake the others. My team gave everything. There were a few incidents of body contact. I received a drive-through penalty for the collision with Joey Hand. That was a bit strange. But next week at the Lausitzring we want to be strong. We showed that we’re among the best in the Audi squad.”

Rahel Frey (E-POSTBRIEF Audi A5 DTM), 16th
“A race begins with the start and if you can’t see the starting lights then that’s bad to begin with. My race engineer in that situation just screamed: go, go. The race itself was okay then. My team did a superb job and we also had a superb strategy. From position 22 we advanced all the way to 13 in between. Unfortunately, I lost the car in the hairpin and dropped to 17th place. Compared to practice and qualifying the race was definitely an improvement.”

Timo Scheider (AUTO TEST Audi A5 DTM), retirement
“I had a normal start, managed to run alongside Priaulx in turn one, who didn’t leave a lot of room for me, so I had to give in. In turn three, I had recovered a few positions, was almost around the corner when I felt an impact and was turned around. On the first lap that was very frustrating. After running as the last car in the field I managed to advance to 14th place. Then I overtook Roberto Mehri under braking and he hit my car. After that the car was so heavily damaged that it made no more sense to keep on driving.”

Adrien Tambay (Audi ultra A5 DTM), retirement
“That was really a shame. I had a good start in my first DTM race. I was already in eighth place. On lap one everything was going really well and I was shooting for seventh place. But then an accident happened in front of me and there was a lot of commotion. I was right in the middle of a sandwich. There was nothing I could do to avoid that. My car was damaged and I was forced to retire. Still, I take positive stock of my first DTM weekend and am already looking forward to the Lausitzring.”

Hans-Jürgen Abt (Team Director Audi Sport Team Abt Sportsline): “It was a turbulent opening round. You could see that we’ve got to improve some more across the whole race distance. As the best Audi team, we’re very pleased with Mattias Ekström’s performance, he fully used the potential. We haven’t got a lot of time to think about it as we’ve got to prepare for the Lausitzring now. But I do want to thank the team. Everyone worked hard and made no mistakes.”

Ernst Moser (Team Director Audi Sport Team Phoenix): “Miguel Molina advanced from 17th place to ninth and found his race speed. Unfortunately, he drove a bit too far at the pit stop and had to let David Coulthard pass. Otherwise he would have finished one or two places farther at the front. Mike Rockenfeller drove brilliantly but we simply didn’t have the speed to keep up with the Mercedes cars. We had to defend ourselves and need to stop that for the Lausitzring.”

Arno Zensen (Team Director Audi Sport Team Rosberg): “Edo (Mortara) had a very good speed at first but then hit traffic after his first stop – the action with the blue flags didn’t work out at all. He lost a lot and dropped behind ‘Rocky.’ After the stop-and-go penalty for turning (Joey) Hand around his race was over. Filipe (Albuquerque) had a good speed and was well on his way toward the front but unfortunately our pit stop didn’t work out at all. I can only say ‘sorry’ for that. Sixth place would have been possible today as a minimum.”