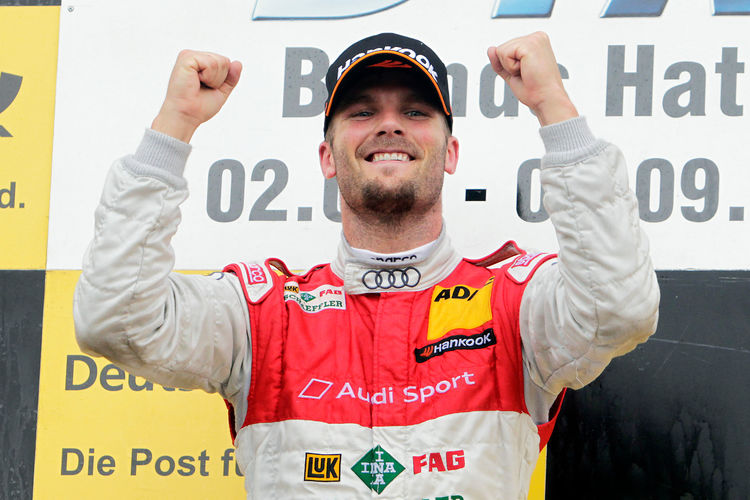 In the rain at Brands Hatch Audi achieved an impressive one-two-three result. Martin Tomczyk recaptured the lead of the standings. Quotes after the race.

Dr. Wolfgang Ullrich (Head of Audi Motorsport)
“A perfect result for Audi! Martin (Tomczyk) drove a fantastic race, but naturally so did Eki and Edo – no question. I’m really pleased with that: particularly because it was a special race due to the difficult conditions. The result is a reward for everyone who has worked so hard to achieve it. It reflects a great team performance. Martin is leading the championship again. Simply marvelous.”

Martin Tomczyk (Schaeffler Audi A4 DTM), 1st place
“A fantastic race! The start was obviously a little tricky. The situation with Gary Paffett in the early stages was a bit difficult. He blocked and wasn’t able to drive the times that I could. But then I found my pace. From then on things were going really well all the way up to the end of the race, very fast, very consistent. It’s been a perfect weekend.”

Mattias Ekström (Red Bull Audi A4 DTM), 2nd place
“I’m really happy. For me, second place feels like a victory because I achieved the maximum. I saw Martin (Tomczyk) behind me, he’s in the title race and I let him run. After that, both of us were driving flat-out. It was a fantastic race for Audi.”

Edoardo Mortara (Playboy Audi A4 DTM), 3rd place
“A perfect race and a fantastic start – a start of the kind you may only manage once in your career. I was able to overtake some rivals early on. The rhythm was good, just in the last stint I had Gary (Paffett) behind me but was able to keep him at bay. A tremendous weekend!”

Mike Rockenfeller (E-POSTBRIEF Audi A4 DTM), 6th place
“On the first two or three laps I had a really good car and was able to move out in front. But the tires degraded and the car was hard to drive. We adjusted the inflation pressure, which was a good decision because I think that afterwards I was very quick again. But then the incident with Ralf Schumacher happened. Honestly speaking, I don’t understand why there was no penalty for that. I’ve got to watch the scene again, but from my perspective the matter was clear.”

Oliver Jarvis (Audi Sport performance cars A4 DTM), 9th place
“The race was good, particularly on the first laps. In the end my tires unfortunately degraded. But ninth place is an improvement over qualifying. Now I’m looking forward to the next race.”

Filipe Albuquerque (TV Movie Audi A4 DTM), 11th place
“I started from the last grid position, the start went well. The rain was good for me. In the beginning I was struggling a bit, but then it got better. I was able to get past Susie and Renger. Considering that I’d started from position 18, eleventh place is good. It was a good race. It’s a shame that I slipped in qualifying.”

Timo Scheider (AUTO TEST Audi A4 DTM), 16th place
“I actually had a decent start and was able to make up some positions in the first two turns. But in turn three, I was unfortunately hit. I thought something was broken but only the tire was damaged. Unfortunately, my pit crew wasn’t prepared yet which cost a lot of time. From then on I had a decent race. But that doesn’t get you any points, I’m afraid.”

Rahel Frey (Glamour Audi A4 DTM), 17th place
“I had a poor start, and then I was unfortunately at the end of the field. I was able to catch up with the cars in front of me and overtook Filipe (Albuquerque). I wanted to pass Susie (Stoddart) too but then spun off and was at the rear of the field again. I tried to keep putting on pressure. We had a late first pit stop, which was good. After the second stop I was too fast and slid into the gravel trap. But I’m pleased with the weekend because I felt comfortable in the car.”

Miguel Molina (Red Bull Audi A4 DTM), retirement
“At the start I was hit and then the steering wheel was crooked. For safety reasons we decided to retire.”

Hans-Jürgen Abt (Team Director Audi Sport Team Abt Sportsline): “Today was a great day for Audi and for all three teams. I’d like to thank everyone for sticking together the way we did. Now we’re back on track for the championship. Martin (Tomczyk) is leading. Audi could not have expected more of this weekend. We showed a good performance. We’ll heavily celebrate that today.”

Ernst Moser (Team Director Audi Sport Team Phoenix): “Martin’s victory is the kind of result you wish for. Naturally, you’ve got to find the right set-up in the rain, but everything fit. Mercedes was slower in the beginning. That’s when we were able to achieve our advantage. Martin (Tomczyk) came home without any mistakes. Everything went right with the strategy too. ‘Well done’ to the squad, to Audi and of course to Martin. Rahel (Frey) was running at a good pace. She was almost as fast as Martin. If she hadn’t made that small mistake she’d have finished on a nice position. Too bad!”

Arno Zensen (Team Director Audi Sport Team Rosberg): “That was a great day. Edo’s (Mortara) start was already sensational. He drove a fantastic race. We had very good stops, the strategy was right. I’m happy. Filipe, too, advanced from position 18 almost into the top ten. Let’s continue like this. ‘Well done’ to Martin Tomczyk – a class act!”